Sorry I couldnt figure it out. I had Urben make it to a WIKI. So all should be good now

Contract ID : 1-30-2299639-01
Platform : PC (Epic)
Submitter name: EU BWIPO
Contract title: High-altitude Falling
Briefing：In summer, people need to pay special attention on it. Otherwise, they will get ill easily. In such high temperature, if people don’t pay attention to their health, they may get sunstroke. But if they often eat the food that can decrease internal heat, they will have less chance to get sunstroke. In addition, in summer, people always have hot temper because of the hot temperature. And it is easy to feel tired. So, they need to have enough rest to adjust themselves. In a word, people need to pay special attention in summer to live a healthy life.
Location : CHONGQING
Featured Contract Image: 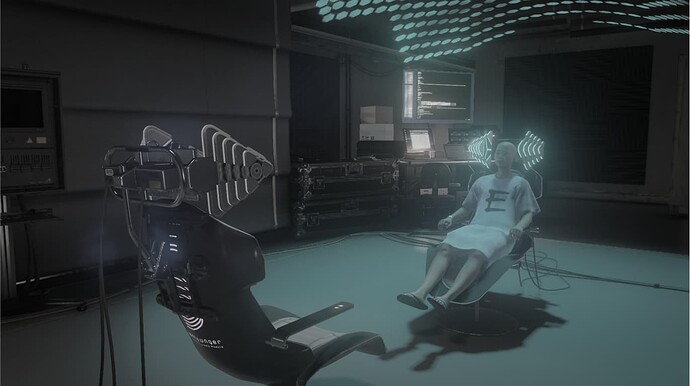 My problem is never yer background images, youve gotten quite excellent at them. My problem is that you cover them up with way too big info or info that shouldnt be there.

Contract ID : 1-04-2870714-01
Platform : PC (Epic)
Submitter name: EU BWIPO
Contract title: The show is over
Briefing：Know the noisy tearing his voice shouting the pool of water lilies slowly opened the hazy eyes.Dragonflies fly from the surface slightly sideways in the shuttle between the leaves from time to time.to roll down the dew to wet its wings.summer wake up in the lotus pool.Lying on the soft and comfortable grass the face of the wind to bring a little hot face.the flowers were in full bloom and the brids were singing in their branches.sunmmer run in the wilderness.Everything seems to burn up.The world is a warm red.Lotus on the seven-color rainbow who is not careful down the pigments.summer is bathed in the light of the light 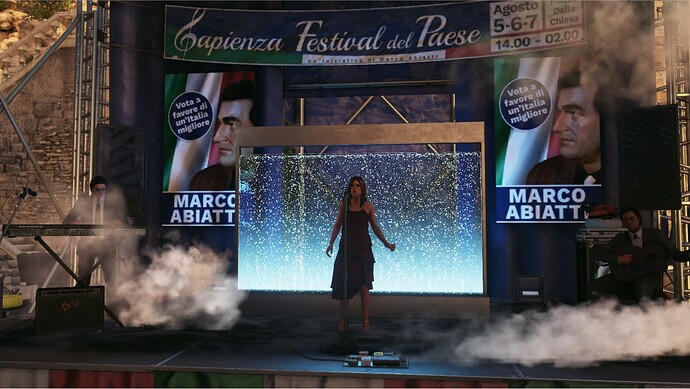 Contract ID: 1-03-1599974-62
Platform: PC (Steam)
Submitter Name: piko1311
Contract Title: Stay Hydrated
Briefing: Good morning, 47. Our client is Silvio Caruso, he is worried about 3 of his mansion guards, because they have started acting in strange ways recently.
Silvio believes it must be Sapienza’s merciless heat getting into their heads and he has asked us to help them “cool down”. I’m sure you know where this is going, 47…
Brief Description: Hey, it’s me again. Heat stroke sounded like a pretty weird theme when i first heard it, but I’m quite happy with the contract I made. The objective is to push 3 guards to their deaths in the ocean so that they cool down from the heat. Hope you guys like it 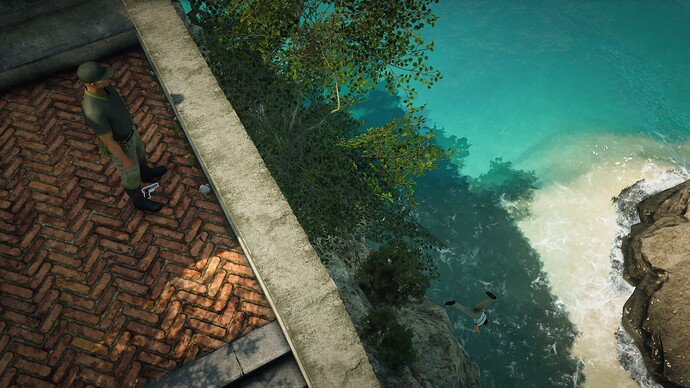 Brief Description:A simple concrat that the core targets are 2 metal workers near the pot.Guard are ez to kill but bodys are not ez to hide.And propane are ez to get,but you may accidently KO someone by the explosion,and everyone will get panic near the target,which may let the body found,or make you can’t exit the mission easily.How should players do in this one? That’s the most interesting part of this one,I,think. 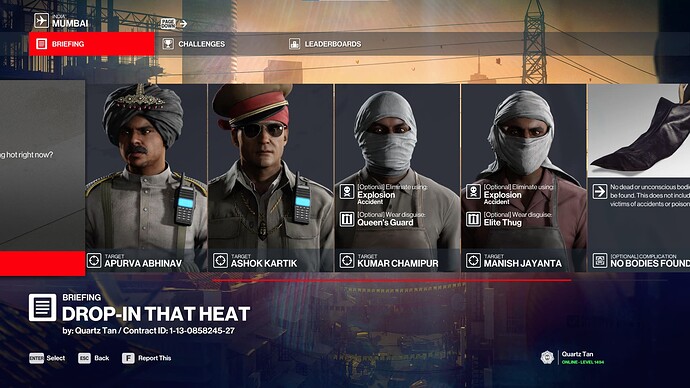 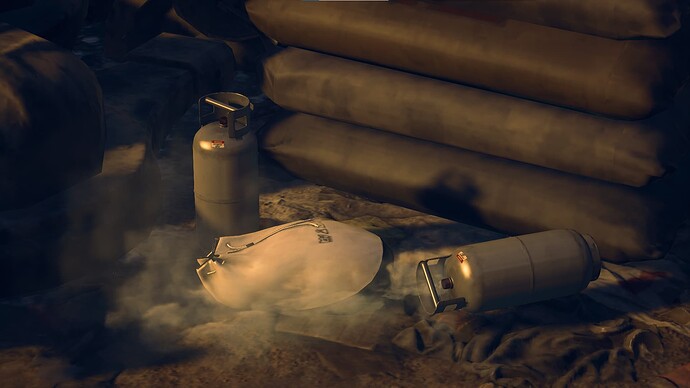 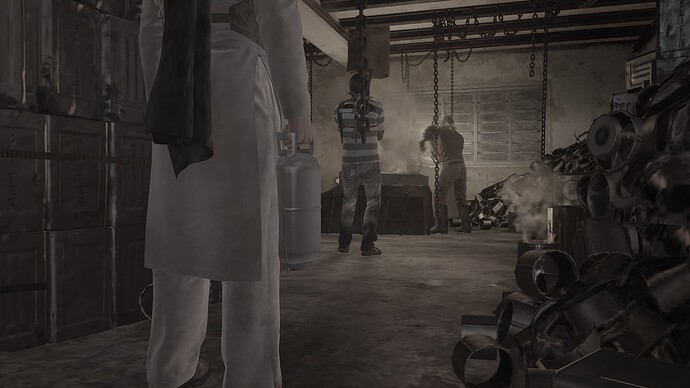 Yeah. I avoided Haven Island and focus on other hot maps for Heat Stroke. It’s too obvious. Instead I interpreted the heat part based off the environment which made me create The Kukri Police set in Marrakesh because it’s a hot environment with probably some cool air conditioners in the consulate building. Also, I resubmitted one of my Envy contracts - The Kukri Komposition to pair it with the new contract. I would imagine things getting warm handling with the electronics and hanging around with large groups of people in a rave festival like Club Holle. Also, who doesn’t love summer festivals. The contracts are already getting a tad weird, so throwing and slicing necks off people with Kukri Knives kinda already fits in Heat Stroke. Don’t worry, my Hot Scope ones are not that weird.

Either way, I do expect one of the 6 Featured Contracts to be set in Haven Island. If that’s the case, oh god… what one?

thats why i submitted a haven one and a mendoza one, to mix it up might make another one set in bangkok. Dont know yet if so expect it.

Contract ID: 3-22-3115778-60
Platform: Xbox Series X
Submitter Name: AshleyJS13 & SecondShaun
Contract Title: A Crumbling Muffin Empire
Briefing: Due to global warming all residents of Whittleton Creek have switched to renewable energy, except one. Helen West continues to use fossil fuels to run her business. It’s time to “accidentally” shut her muffin empire down, and help save the planet in the process. Good Luck 47.
Brief Description: 5 Targets, 5 different accidents are required to eliminate them. Electrocution, Explosive, Fall, Drowning and Poison. No Knockouts, Suit Only, Don’t Get Spotted and No Camera Recordings.
Location: Whittleton Creek
Image Suggestion: 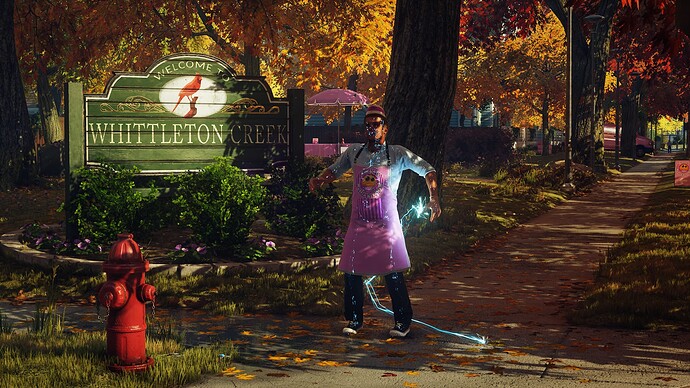 In order to power the submarine, Rico Delgado wants to extract more electricity from the area.

However, there are people who refuse to let go of their electricity because it’s a hot day in Colombia. 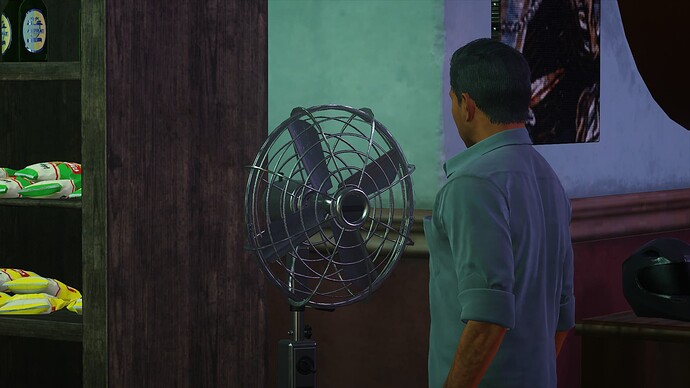 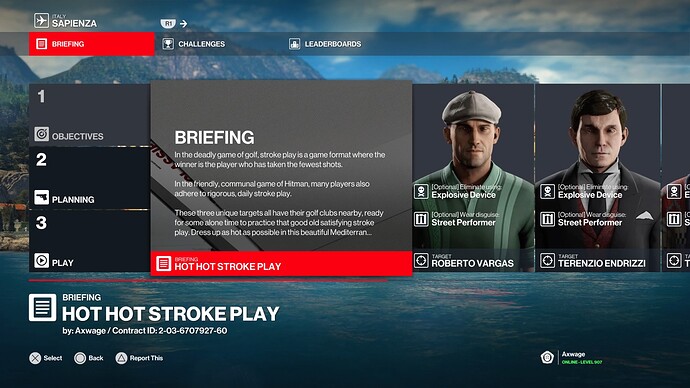 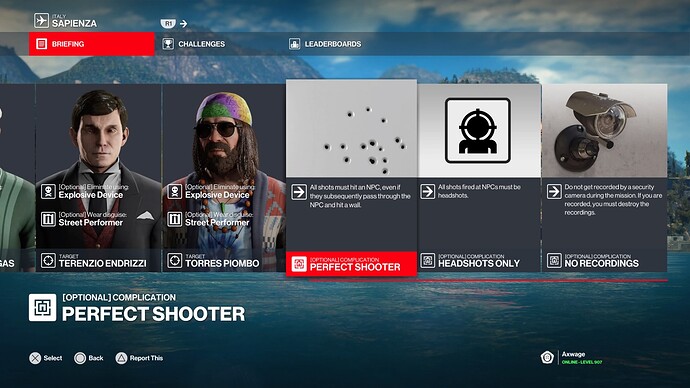 In the deadly game of golf, stroke play is a game format where the winner is the player who has taken the fewest shots.

In the friendly, communal game of Hitman, many players also adhere to rigorous, daily stroke play.

These three unique targets all have their golf clubs nearby, ready for some alone time to practice that good old satisfying stroke play. Dress up as hot as possible in this beautiful Mediterranean sun and show your targets some hot, explosive action.

Featured Contract Image suggestion: I cannot BELIEVE I got this shot using the clunky and slowass screenshot feature on PS4. 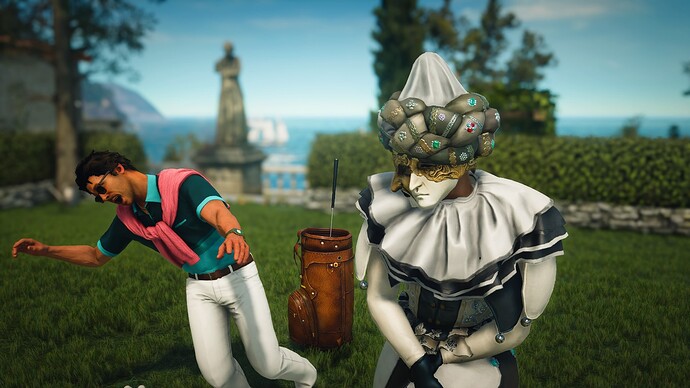 But this is the image I originally had in mind: 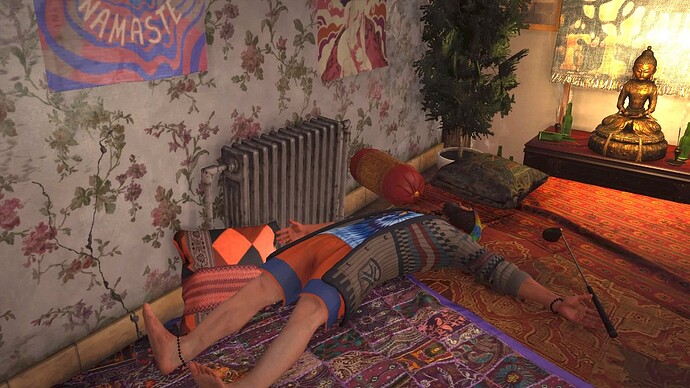 Thanks for playing, friends. 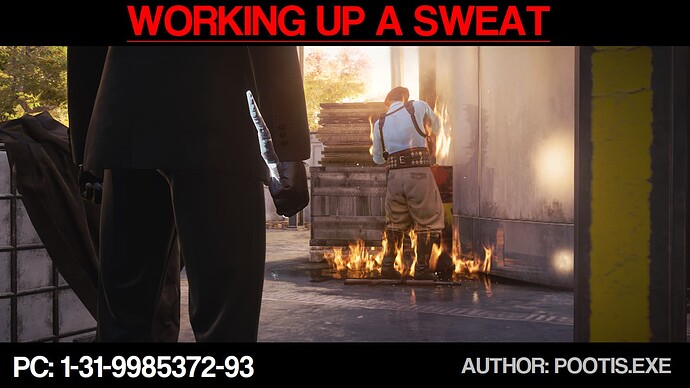 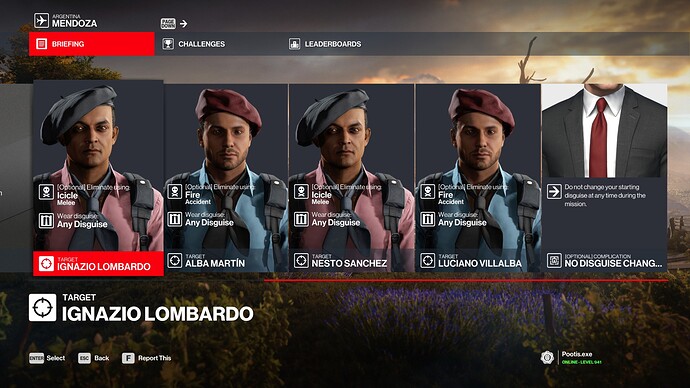 Guard duty is tough when you’re working beneath the harsh Argentinian sun.

Lombardo and Sanchez are hard at work; roasting away in the unforgiving heat. They’re going to need something to help them cool off a bit.

Meanwhile, Martín and Villalba are slacking off. Give them something that’ll light a fire under their feet.

Remember, it’s hot out there; so make sure you do all your sweating inside just the one outfit, okay?

This contract takes some inspiration from Checkerboard by Quine; one of the featured contracts from Hitman 2.

The player is required to eliminate four guards near the sniper lookout in the vineyard. They must eliminate the two ‘lazy’ guards using the nearby oil barrels, but the hard-working guards must be eliminated using an icicle (which can be found in the freezer in the production room).

Additionally, players are also required to remain in their starting disguise for the entirety of the mission. However, they are given the choice of which disguise to choose. The only starting disguise that is permitted to enter both the villa’s vineyard and the production floor is the Gaucho disguise, meaning players who choose this easier route will have to waste time running down to get the icicle. Players who wish to get the fastest times will need to use a disguise that starts them closer to the icicle, and then eliminate the targets while trespassing.

Players also need to keep in mind that Fire eliminations are noisy and will disrupt the patterns of the nearby guards. They must also be careful when firing shots to light the fires as it could potentially send the guards into alert mode; making it more difficult to secure an unnoticed kill with the icicle.

There are no restrictions beyond the ones already mentioned; leaving players with plenty of different approaches to experiment with.

Image Suggestion: Below is my personal favorite from the ‘photoshoot’ that I did. I’ve added some more suggestions in the drop down menu below. Feel free to use whichever you prefer. 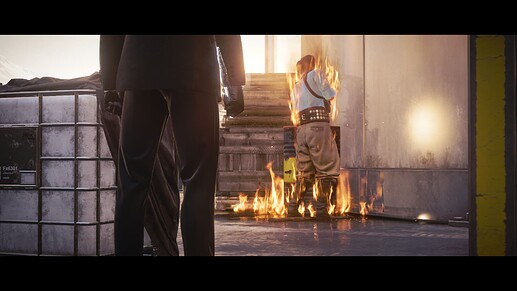 Title: Summer suit(able) suntime!
Contract ID: 3-08-8868547-17
Username: Wigglyweevil211
Location: Bangkok
Platform: Xbox
Brief description: Due to the sun’s heat three people have been stuck indoors, obviously wanting to enjoy the summer sun once more. 47 has decided to take it into his own hands and eliminate these summer lovers with a blood steel cleaver to give them hell quite literally. I found my strategy for this contract interesting as trying to get to the kitchen and get the cleaver then kill a crowded NPC (Holly) with a non accident, then going to the top floor and eliminating the a cleaner up there (near by to others as well) and all this in SASO style. It can be done im sure one HITMAN fan out there will do it in 30 seconds (theres always one person who does.) i hope you like it.
Description: 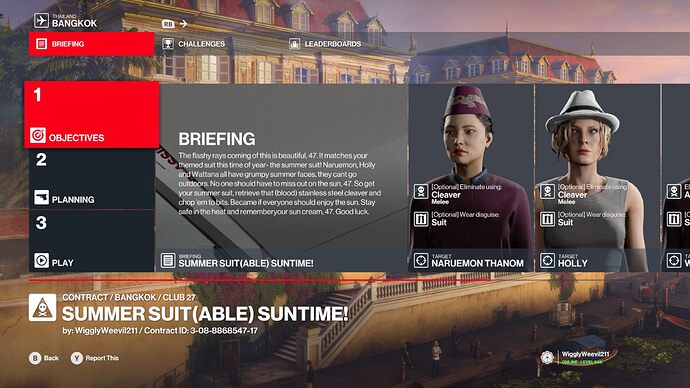 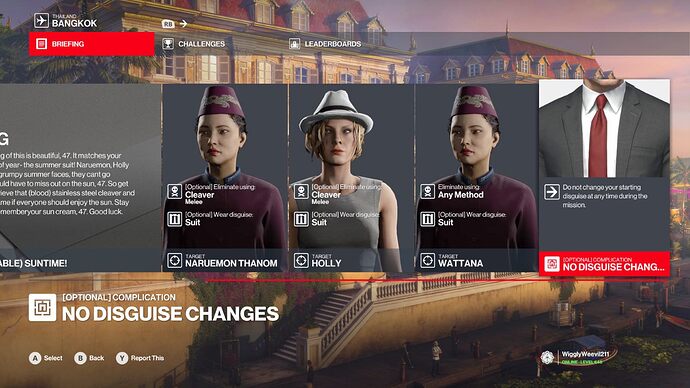 This is a beautifully designed contract.

@Pootis.exe for the future submissions please specify which platform the contract for.
I mean PC has now 3 different places to play and all those contracts are not crossplatform even in this case.
So it just will be easy to identify for what store the contract is

Briefing: Looks like it’s going to be a hot one in Marrakesh, with highs of 113 and lows of 17 degrees Fahrenheit. Let’s hope everyone listening can stay cool on this hot summer’s day!

Brief Description: Explore the underground tunnels and consulate while spreading the heat from outside. 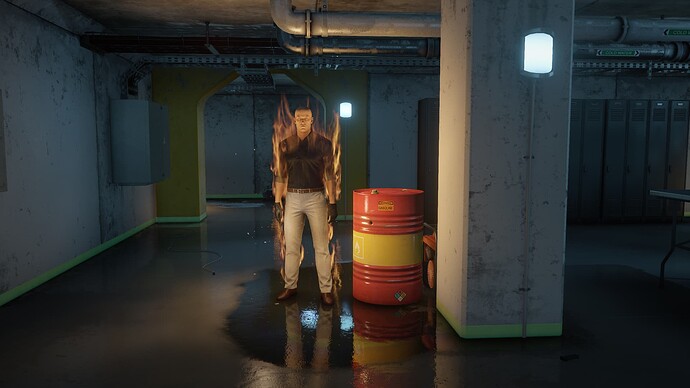 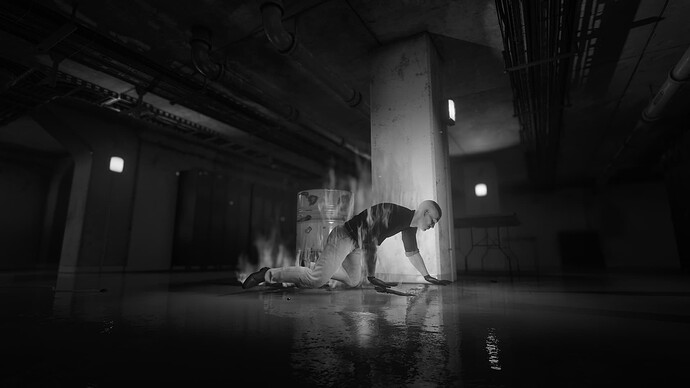 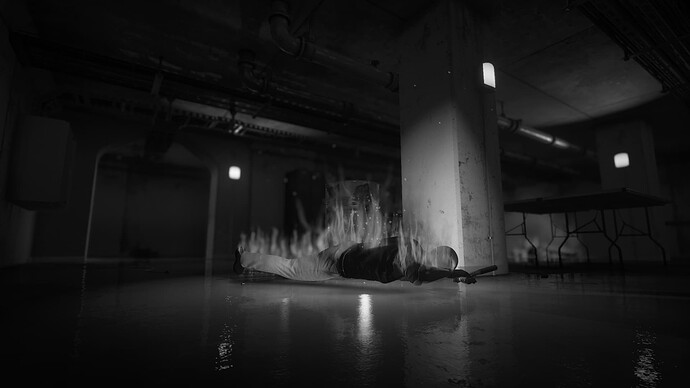 Nice! I was just toying around with this triple kill a few days ago and considered it for Heat Stroke.

Briefing:The weather is getting hot, and the guards want a summer vacation…Why not? 47, go and give them a holiday!

Brief Description:Use a propane bottle… Or any other way you can think of! 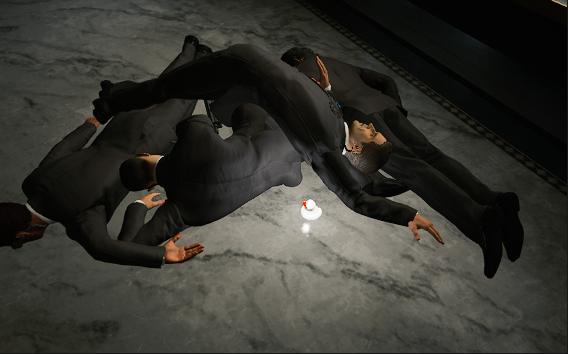 This is the first time I have tried to make such a contract. I know my contracts are boring, but I just want to try.

Ah ok. I assumed PC contracts were cross-platform but I guess not. I’ve edited the submission to specify that it’s on Steam.

Thanx, glad someone else discovered this gem as well!