The Closed Technical Test starts today and we’re super excited! As part of our preparations for the mode, we’ll be holding this Closed Technical Test (CTT) to put our servers under stress, get an early idea of player behavior and do some economy / XP balancing in a real-life scenario on a big scale.

This thread will be all about the CTT. We want to have all feedback gathered in one place.

Please keep this thread only about the CTT

Can’t wait for you to play it! Have fun. 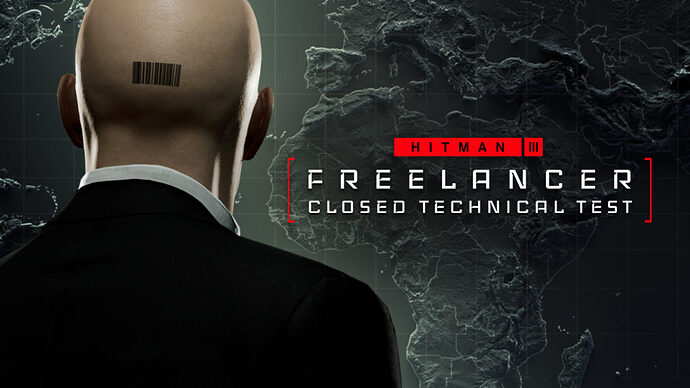 thank you clemens can’t wait to watch people play it

good luck everyone on it

(hopefully only for the ctt)
Lacks VR support 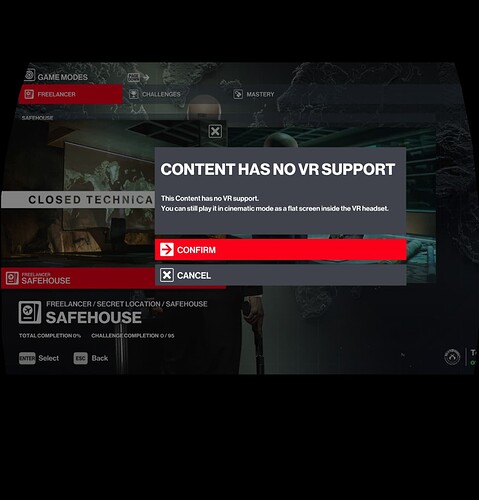 image1238×1291 65.3 KB
Loading cutscenes have a black bar across the whole screen in ultrawide, which looks rather bad

HITMAN3_2022-11-03_15-29-321920×804 57 KB
Safehouse lacks a boxreflectioncache, leading to lighting breaking after loading another level, then loading back to the safehouse.
Intended lighting:

So I died during a showdown, I lost all of my collected tools (explosives, poisons) in the safehouse but kept all of my guns… is that intended behavior?

I tried (iirc) The Gun Runner. The first destination was Sapienza. Looks like the layout is from Master Mode. I got confronted (“Hey, I don’t know you!”) 3 times. I didn’t find an assault rifle and killed a target with an SMG (HX-10, obtained from one of the Lab guards - I didn’t know for sure if it was an Assault Rifle), I didn’t feel like hunting down the correct gun. Got the 3 Shotgun guard kills, left with my suit… Also left the shotgun and SMG by the boat exit.

Since it was in Master Mode I had to really keep an eye on my map and those pesky white dot enforcers, even the yellow suspicion arrow.

The next 2 locations will be Hokkaido, then Mendoza (I believe). That’s the order I want to do them in.

Strange… If Sapienza was at Master Mode level… I’m wondering what ‘More difficult’ would equate to.

This seems to be the roleplaying aspect almost turned up to 11. Pausing only gives you the chance to return to the title screen/main menu. I left the game after returning to the safehouse. I hope it will keep my progress and ready to take on the 2nd (part of the) campaign.

Finished my first ever mission. With all of the optional objectives done. 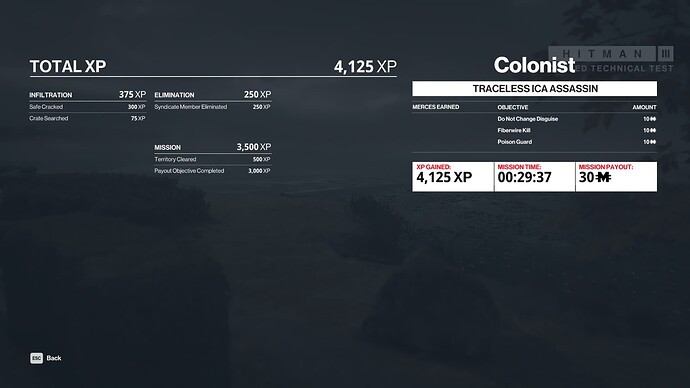 Location was Dartmoor. The target was a maid who entered an empty room alone - easy fiberwire kill (first objective done). I found a stethoscope in my safehouse - this came in handy so it´s good to explore before you embark on a mission

. Suit only was also pretty easy (second objective). Third objective was “Poison Guard” - not really necessary for the mission but I did it anyway. Same for cracking the safe (not necessary for this particular mission).

I took my time and explored the level. I really like the hidden crates containing extra items or Merces. Exploring is rewarding in this mode.

I just wish the objectives corresponded with the main assignment. Why should I spend my time looking for a guard to poison when it´s not necessary? But I guess the objectives are random?

It was OK. Nothing special, nothing terrible.

Based on what Diana says the first time you look at the tools collection, yes, that is intended behavior. Those items are lose-able while the walls of guns are permanent (unless you leave them in a map).

Oh ok! I misunderstood that then 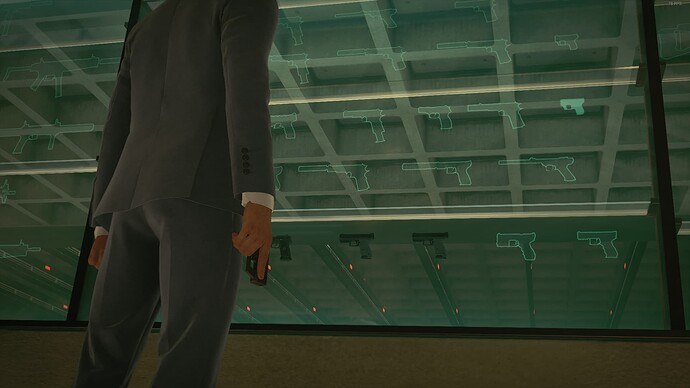 Here’s a quick little first impressions of freelancer after 2 hours of play and 2 syndicates defeated.

First off, let me commend the ioi Developers for not only creating so many new things but developing an entirely new system for gear, a safehouse and other in game things. This is fantastic and they should be applauded for it.

But freelancer itself is very mediocre in my personal opinion, in the 2 hours ive played. My 2 main issues with freelancer are that the gamemode does not incentivize clean play, Silent assassin does not affect your final experience or merces and though there are prestige challenges that reward extra money for silent assassin and silent assassin suit only i do not think it is enough to make the gamemode more interesting and challenging. Because now the dominant strategy for me personally is to grab the best disguise on the map im on, ransack every loot crate, courier and safe and then take out the targets in an sa way because i enjoy that playstyle.

My second main issue with Freelancer is that its very tedious/monotonous. I know its probably the best they could do, but it being a glorified contracts mode with very few new npcs or changes really does not make the best of the new mechanics like lootcrates and shopkeepers. And makes it feel like a contracts mode without all the menuing. 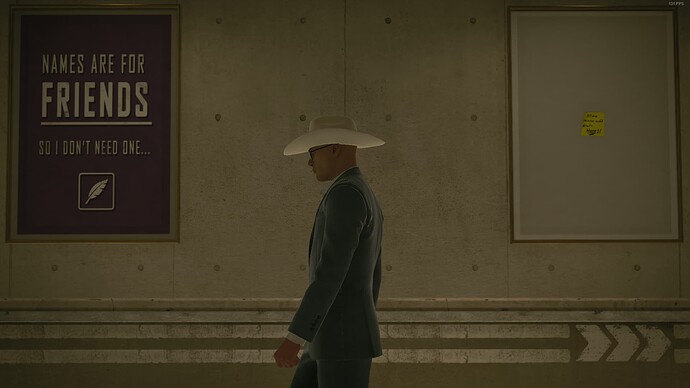 I would say something about the safehouse itself, but as of now iam only mastery 6 which means you’ ve got absolutely nothing to customize or even look around in the safehouse. I do hope that the mastery progression of the safehouse isnt mind-bogglingly slow for the later mastery levels as that would really bring down the mode as a whole.

All in all, after 2 hours I’ve had 2 majors issues with the mode and a minor gripe with the safehouse due to not having unlocked much, i hope i can see more positives the more i play of this mode but as of now this served as a great way to get my expectations tempered for the final release. Though again, massive props to ioi for even creating this game mode when they really didnt have to 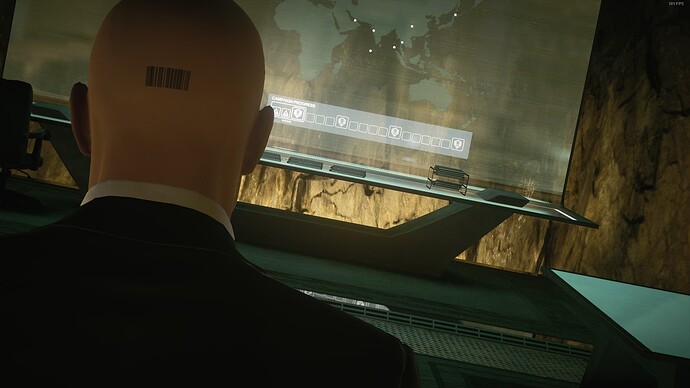 It would be nice to one have the Black Trinity, the one in the cutscene

And two when I die the things I have in those 3 suitcase like vials and crowbar remain there.

Silent assassin does not affect your final experience or merces

I think that’s one of the reasons I’m enjoying it so much! The less emphasis on “perfection” the better for me. And the less said about suit only the better…

Hmm, thats a perspective i didnt think of yea, though for me it makes freelancer so easy its main gameplay loop becomes tedious and boring for other people they may like this approach.

When I realised silent assassin wasn’t a thing I started playing fast & loose but then on the next campaign one of the same locations came up again & it was in an “alerted” state so unless that’s just random I think the incentive to play well is to save yourself a headache later.

2 things about the motivational posters in front of the wardrobe.

1- is it intended that the redecorate prompt only appear when using instinct?

When you’re selecting posters some of them say “(premium)” on the button prompt - what does this mean?

The lack of silent assassin is brilliant to me. The infinite contracts mode is where I feel the mode might not impress me like I thought it would. I actually enjoy the idea of infinite contracts mode as a separate mode, but I wouldve liked better IOI to have made either a bunch of NPCs with different routes that are picked at random, their locations in those routes are random and their next destination in that route is random, or better yet a procedurally generated NPC route and appearance. So lets say you give an NPC three points of interaction - the procedural system will generate those three different points by picking interaction points within the levels. So Target A’s first interaction will be drink wine from this glass in this room, then walk down to this chair and sit in it and then walk up to this balcony and lean on it. Something like that
That being said I can see myself playing and enjoying Freelancer because I enjoy contracts mode and because I want something more loose and lax than the main game that I can play infinitely. Still, it’s not how I would personally approach a roguelike mode. In a perfect word Freelancer would be what I propose and the current system would either be A) another alt game mode, or B) one of many complications in the Freelancer mode, like maybe one type of Syndicate brainwashes people and thus only uses NPCs from the main mission
Edit: i also kinda hoped if you abandoned your suit in a mission youd come back in sort of only your underwear and would have to get a new suit from that hospital room lol

Not sure about the underwear, but leaving your suit in location should definite have the same impact as leaving a gun there, meaning you lose it!
You do gain the clothes you returned with, allowing for example to start in Paris wearing a Mumbai metal worker outfit.

Looking at the footage of the showdown missions is way more up to my speed. Really enjoy the new NPC routes and mechanics, wish they applied more to the other missions. Also the fat theres not a flat pay rate of merces is strange and should be changed