There are many ways to buy Hitman 3, but how confusing is it? (Comment)

1 being least confusing? 1.
I bought it before it was released and then pre-purchased the DLC. That was it. No hassle, no confusion.

Uhhh…it’s not confusing at all. I could buy a physical copy from a store or download a digital one from the Xbox/playstation store.

On a scale of 1 to 10, I’ll give it a 3. It is certainly the least confusing of the trilogy to buy, at the very least.

Here’s the standard base game. Also here’s options for the Deluxe Edition “”“”“content”“”“” and the 7 Deadly Lame Escalations, both of which cost half of the base game for some insane reason. Also, here’s some DLC Access Packs for the previous games if you don’t own them already, that’ll be just 100 dollars, please.

And that’s it. Unlike the episodic structure mess from H1, or H2 with its million editions and DLC that required special spread-sheet guides to know what you had to buy, H3 is pretty straight-forward to follow. the only problem is that it’s all ridiculously overpriced for what you actually get. That’s why I thank Ort-Meyer everyday that Freelancer and Ambrose Island are both free…

Not immensely. I’d put down a 3 due to having to realise that the past games are DLC which are relatively simple to buy.

Thanks. I’m thinking of buying the game during the next sale. I’ve already got Hitman 2 and the Hitman 1 expansion pass.

? How would it be confusing? You press the purchase button?

Haha, nice one. But if you actually are serious, I’m talking about buying the game after having one of the games, such as Hitman 2. It’s like when you don’t know if you should buy the deluxe edition, or just the standard.

Not sure how it’s confusing.

On a scale of Amazon one-click ordering to doing a U.S. tax return? Probably like a 4 at worst, but anything higher than a 2 is unacceptable IMO.

It all depends on your opinion of the game and if you think it’s worth it. 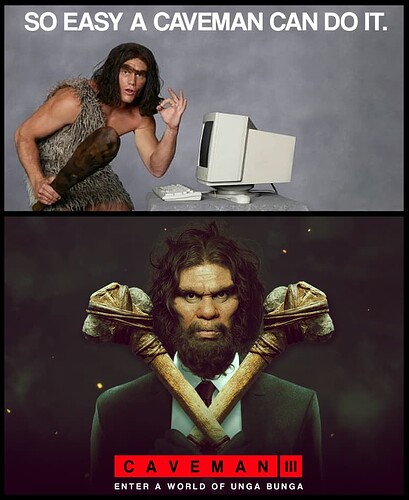 Nah, I got burned on Far Cry Primal…not going for Pre-histman.

It was confusing at launch because it wasn’t clear what came in each edition & whether you’d get the maps from the previous games automatically or if there was some DLC thing you needed but now you have lots of people who can tell you straightforwardly: buy the standard edition & link your ioi account

Was it though? IO spelt it out pretty clearly ahead of the launch imo. The only people that would’ve been confused at launch were the lazy people that were asking other people on reddit/Discord etc instead of just going direct to the source and got a whole bunch of guesses and half truths from people that didn’t even read the information properly themselves.

Personally, I knew exactly what was going on ahead of launch because I read the IO blog…

I’m puzzled by most of the responses here. I could understand if the question was “how confusing is it to buy Hitman 3 for a person who frequents a website called HitmanForum?” Sure, in that case, the answer is that it would probably be quite simple.

But to an outsider who has never played any of the trilogy before, it must feel rather confusing. You might think it’s entirely reasonable to expect them to do some research, consult online guides, perhaps even refer to this handy flowchart… 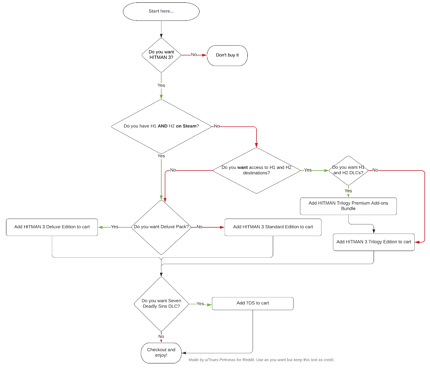 I would argue this level of forethought already constitutes a significant degree of confusion.

Furthermore, do not underestimate the level of knowledge required to be able to answer those questions. For instance, just look at the difference between Hitman 2 Gold and Hitman 3 Deluxe. It’s obvious to us that adding H2 Gold is a no-brainer, whereas H3 Deluxe is not such a tempting proposition. But to arrive at that conclusion with no prior knowledge requires a fair bit of homework.

There’s all sorts of questions like that to consider, and each one takes time to research. I would suggest a “simple” process which requires significant time & effort to understand is not, in fact, quite so simple.

Ok, thanks for all of the replies, I think that I can now successfully buy Hitman 3 without wasting a ton of money. Since I have Hitman 2 and the GOTY Expansion Pass, I’m going to buy Hitman 3 Standard Edition.