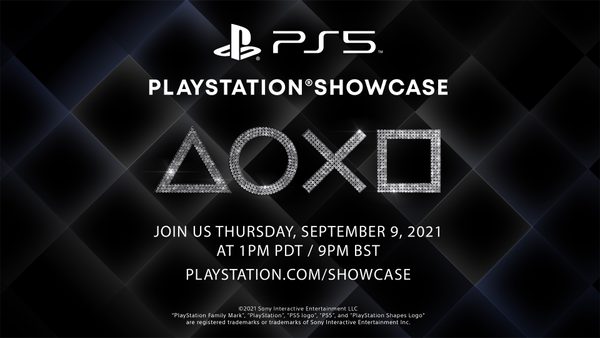 Tune in to see what’s next for PlayStation 5.

You’ve been awfully patient, and we thank you for that. And now we’re looking forward to showing you what we’ve been working on.

Tune in next Thursday, September 9 at 1:00pm Pacific Time / 9:00pm BST / 10:00pm CEST for a look into the future of PS5. The Showcase will weigh in at around 40 minutes and include updates from PlayStation Studios and some of the industry’s most imaginative developers, for games releasing this holiday and beyond. And stick around after the presentation to get more updates from some of the studio teams featured in the Showcase.

One thing to note: PlayStation’s next generation of VR won’t make an appearance this time. But there will still be plenty of great PS5 games from developers large and small. We hope you can join us!

You can watch live on YouTube and Twitch. See you next Thursday!

I’m hoping we get a trailer for GoD Ragnarok.

it will appear according to a reliable leaker https://gamerant.com/god-of-war-ragnarok-playstation-showcase/

I am looking forward to new Gran Turismo 7 announcement. It’s been more than a year since the first trailer dropped and nothing else was released. New footage of gameplay, release date and even information of whether it will be PS5 exclusive or on both PS4/5 consoles will be fine. Here’s the old trailer: And hey, remember back during the same event, this trailer of GTA V Enhanced and Expanded Edition was released and it soon turned disastrous, becoming the most disliked trailer from R*? Well perhaps it’s time to really see what’s truly expanded and enhanced, so maybe I and other players can be convinced to buy the game, again. I am more looking forward to the rumored 3D trilogy remastered, though. I remember this was even the first trailer shown at the event, and an higher up of PlayStation constantly praised how great the GTA franchise is to PS.

Chances are any new GTA announcement will be shown first on Thursday too, I think.

If they work on that I bet they got a bit scared with the Steam Deck announcement. These things are surely neat (for a long time I was waiting to get a certain one but I gave up since they are still in pre production) but I think they can’t pump out the volume needed to be a rival of Switch, Steam Deck and a new Vita.

It generally is a bad time to release hardware.

Agree. It’s not just about the volume, the reputation is also a parameter. Which would look better to a non-tech person , “sony” ps vita/psp(good old times), “steam” deck, “nintendo” switch or somewhat somewhat unknown thingy?

Grand Theft Auto V - Coming to New Generation Consoles - YouTube
I remember this was even the first trailer shown at the event, and an higher up of PlayStation constantly praised how great the GTA franchise is to PS.

Chances are any new GTA announcement will be shown first on Thursday too, I think. All jokes aside, I am curious what the E&E version looks like, although I probably won’t buy it. There were also some rumours about remasters of the original trilogy. It could show up.

As far as Hitman goes, I wouldn’t expect anything at all tbh. We’re still balls deep into the 7DS release schedule.

Steam Deck and a new Vita.

Now I’m no genius, but one has more enticing options for people while the other has Mario with nipples which appeals to a smaller demographic.

I am curious what the E&E version looks like, although I probably won’t buy it.

Higher Frame Rate with 4K resolution with better graphics. It will also have new particle effects like explosions and fire. A few seconds of gameplay was found within a recent PlayStation trailer but it’s nothing crazy because it again is very little. It won’t be up to par with RDR2, but similar to what it GTA 5 is on PC on High Settings

There were also some rumours about remasters of the original trilogy. It could show up.

I said it before and I’ll say it again if this to be true now is the time to do it during this PlayStation State of Play. GTA 3 and it’s Anniversary is next month. If it’s not unveiled now then marketing for it in something like GTA Online would be too late since it would allow limited time offers of some sort.

In a separate post I’m posting this leak here since it will most likely be revealed at the showcase.

I was honestly surprised by a link to Ruten, a Taiwanese auction website. I used to buy stuff there, but I am not sure everything there is legit, though.

I don’t know, it seems a bit funky to me. The cover doesn’t have an actual rating by any authority. It’s also the cover art of the original game. Surely it can be just a placeholder, but the price of NT$788 is strange as well. It’s usually not that cheap, even for a remastered game.

Well anyway, we shall see if the info is legit soon.

All things considered evidence does suggest a remaster would happen given the renewed interest in the series and how they acquired the IP and subsequently renewed licensed music just so they could put it back on digital platforms.

Yup a remaster is happening. Pushsquare posted about it yesterday

Nice! I’ve been meaning to play that game for a while now so the remaster is a great incentive

They’ve had the publishing rights to Alan Wake for over 2 years now. And I’ve been waiting for a multiplatform release ever since… at the very least just a port!

But if it’ll be Remastered and released, that’s great.
My little laptop could mostly hold up running the game at Low some 8-10 years ago. If it gets a facelift and is able to be played on my PS4, I’ll be so darn happy (and probably impressed with the graphics). Finally, a stable version I can get my hands on

The Alan Wake Remastered is an “old” news and leaked through the Epic Games Database, back in June.

Definitely this is a MUST for who never played this game, especially if you never had the game on xbox or pc. Playstation users should be happy now

Anyway still waiting Alan Wake 2. A remaster isn’t there for nothing.

I’m ready IO for some WOA news on September 9

I WANT TO BELIEVE Will it be a worthy show opener, or show closer