Question about the Kalmer

I was looking at the Hitman wiki and saw under Trivia:
Even if anyone sedated with the tranquilizer is found, the “No Bodies Found” point bonus is retained and it does also not break Silent Assassin.

Can anyone independently confirm this? Because this is pretty big deal.

It indeed does work. Bodies found after they’ve been shot with the Kalmer won’t count against your SA rating unless you start dragging them afterwards. 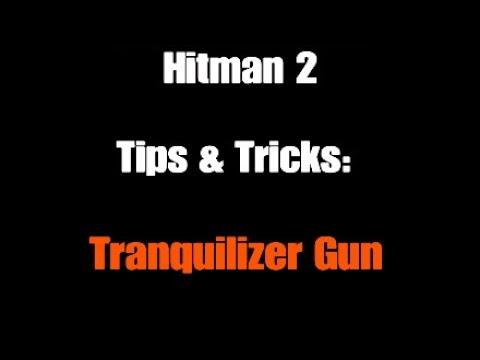 (Please excuse that it’s a Hitman 2 video and not a Hitman 3 one, it works in H3 too)

Yeah, it’s one of those hugely counterintuitive rules that makes a huge difference.

I mean, you can even see the dart sticking out of them! Nobody cares.

The Kalmer is extremely useful due to this reason. It is also very convenient for if you need items to drop from a Non-Target and can’t be bothered to KO them and keep them hidden.

I don’t remember if they did this in H2 but in H3 I hear the NPCs make loud sleeping noises when hit with a Kalmer.

I like it because sleeping on the job and being knocked unconscious should be noticeably different. Just ignore the obvious dart.

I thought I was imagining that! It’s hilarious!

Sedatives are also a rather kind way to get innocent NPCs out of the way.

I would also like an unlockable banana for this purpose.

I do think it’s a little overpowered, but not too bad since you can’t be seen shooting it. I’d probably change it to one shot, or a much longer reload, but whatevs. I usually don’t use it 'cause I’m a “take the default loadout for extra challenge” kinda guy.

So it’s quite a commitment to bring the Kalmer or Sieker.

I think the Kalmer is perfectly balanced in its current state. The weapon only comes with 2 darts (unless you also bring the reskin or Sieker) and takes up a spot in your starting loadout. It’s an interesting tool that opens up smart opportunities and strategies that require planning and skill to carry out. It’s a great addition in the sandbox.

At the very least, it’s a definite improvement over how the Kalmer worked long ago when Hitman 2 launched. Darted bodies, if found, would void Silent Assassin. The gun was completely useless as a result. I’m very thankful IOI listened to the few of us who advocated a change was needed to the Kalmer. It was a year later when the devs changed some things behind the scenes so knockouts caused by accidents and sedated bodies would not void Silent Assassin.

Sieker gave me an easy SASO on Whittleton Creek. Would have been way harder without it, so I love those guns!

Still, it’d be nice if the game officially acknowledged how it works in the item description. You wouldn’t need a wiki or this board to figure it out.

I like it because sleeping on the job and being knocked unconscious should be noticeably different. Just ignore the obvious dart.

Tell that to my boss. Every time I “get knocked unconscious” she is making a fuss about it … sigh

But jokes aside, I did not know this which is why I never used the Kalmer.
Or maybe I did and only forgot. Not sure.

I’ve played a couple contracts before that utilize this trick with the Kalmer. The kill conditions require a disguise from someone you have to knock out, the contract requires all bodies to be hidden before you can leave, and the person whose disguise you need is nowhere near a crate or cupboard to hide their body in. So the solution is to knock them out with the Kalmer, take their disguise, and then have someone else wake them up so you don’t have to hide their body anymore.