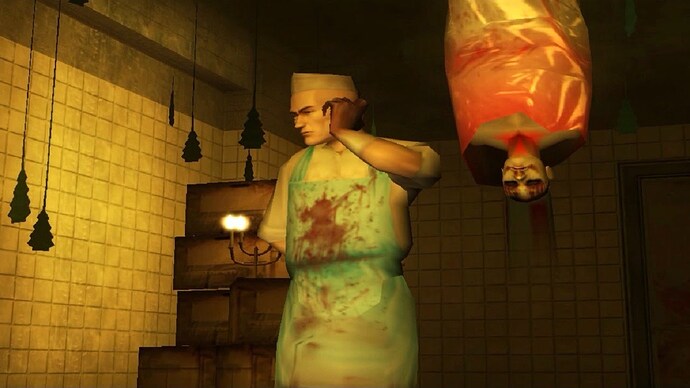 image1280×720 95.7 KB
Our client believes his daughter was kidnapped and possibly killed by self - proclaimed “Meat King” Campbell Sturrock. Assassinate him and his lawyer, Andrei Puschus and get " The Girl".

Sturrock was prosecuted for the kidnapping but despite the overwhelming evidence against him his lawyer got him off through a technicality of Romanian law and some well-placed bribes. They’re having a party to celebrate their courtroom victory tonight, so the security is going to be tight at the plant. Even so, it’s an ideal opportunity to assassinate the targets. The large number of guests and staff at tonight’s party should give you plenty of opportunities to get close to both men.

I absolutely love this mission, perhaps the most out of the entire series. And as much as I love what was done with 47’s character in the most recent trilogy and his apparent new enjoyment of his career, I miss the days of missions like this, where 47 and Diana were so purely, utterly professional and unemotional that even in finding out that their targets did not actually kill the girl, it didn’t matter at all. 47 killed his targets with his typical robotic coldness, and (assuming a player is only following mission objectives and going for SA ranking) didn’t even consider killing the actual murderer… because the client hadn’t made that a stipulation of the contract and paid him to do that!

This was, in my opinion, the most “Hitman” mission that has ever been put forth, even lacking as it is in accident options. A hall of fame entry.

I like this mission, but I feel like there should’ve been more ways to kill Puscus. the only way to reasonably kill him is by shooting him when he looks in the mirror in the bathroom,

Puuut your head on my shooooooulder,
Hold me in your arms

It’s a guilty pleasure of mine.

paul anka put your head on my shoulder

A classic for the ages. It’s going to be my wedding song.

Couldn’t you just sneak into the opium room and kill him while he lays there?

That’s my go-to, usually. Didn’t realize there were many other options (minus speedrunning shenanigans).

I swear every time I play this level I hear the sentence: “Ive hired you on Craigs list” in the background

What things does Malcolm Sturrock say? Is it true that he recites a poet?

What things does Malcolm Sturrock say?

“Gards…GahRRRDS!” moments before he gets a meat hook face-lift.

Amusing how the guards don’t put a stop to the party when they find their boss dead and everything eventually goes back to “business as usual”.

I mean, they already opened the caviar…

Here’s an image pitch idea I had in mind in which 47 is struggling so much to hide the Meat King’s body that he had to ask Diana and Lucas to help him while Olivia stood watch. Diana probably says something along the lines of “Bloody hell, 47! Couldn’t you have made it look like an accident? Something like a chicken bone stuck in his throat for example.”