I wasn’t going to open this thread as soon as now until @Travis_IOI posted some promising stuff about the season:

The Season of Envy is here! New content, a new Elusive Target and a few other surprises are in store. – - -wait, sorry that was too soon! See you again towards the end of September!

a few other surprises are in store 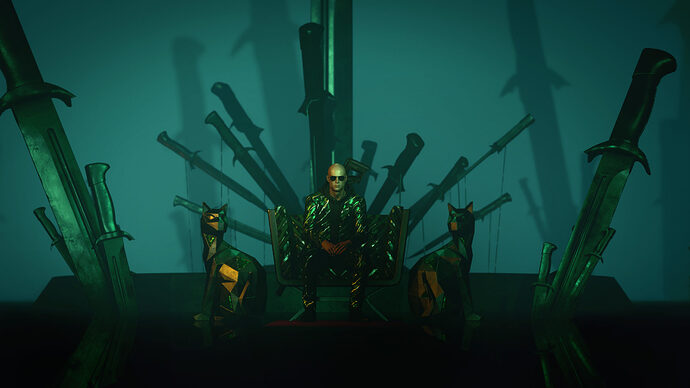 Compete against your ultimate rival and prove you're the best assassin around in HITMAN 3's Season of Envy. 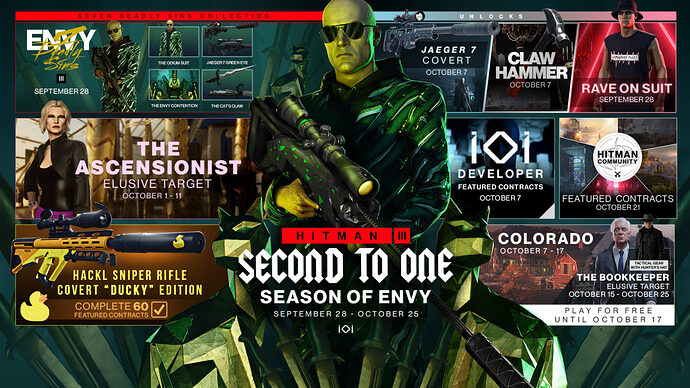 For the differences between Envy and Wrath. I’m about as sharp as a butter knife, but here’s my essay about Envy and Wrath and how they may play out in Hitman.

Envy and Wrath are both about anger at being wronged.

But Envy is more specific, targeting a single person or group of people, and is about wanting what they have.

Wrath is about revenge for some wrong committed on the sinner, more semi-justified.

I expect Envy will be more theft or precise destruction. I imagine Wrath to be more about violence, misanthropy or revenge.

Seeing that we have had ETs in Dartmoor, Berlin and Mendoza, the last two absolutely have to be taking place in Dubai and Chongqing.

So far, we had a murderous art thief, sociopathic hitwoman, a negligent safety inspector, a murderous wedding planner and a celebrity chef and his supplier of fresh corpses.

Fun fact: Google search “sociopathic hitwoman” in quotation marks and the first result should be Joanne Bayswater’s Villains Wiki page. She and Villanelle are the quintessential sociopathic hitwomen.

And so far these new elusive targets have been whiter than a snowstorm, either American or British and, with the exception of our girl Bayswater, men.

So maybe IOI would try and shake it up. I think one, but not both, of the target would be a woman, probably Envy since it’s the penultimate sin.

I think Envy will be something like the vice president of a company, scheming to discredit or kill his boss. He’ll be in Dubai to discuss business with the Sheikh.

Wrath will be something like an infamously temperamental Triad boss.

And the Clemens videos: I think Envy will have him pulling pranks or something on his coworkers and bosses or maybe Square Enix, Ubisoft or EA. Wrath will have him smash stuff with a baseball bat.

I’m really hoping for a Dubai ET in the next season.

If this is the case then wrath’s legacy et would have to be the surgeons bc the farther of the son is wanting revenge and then Colorado’s would be the chameleon? I’m not sure for Colorado’s et

Envy will probably be in Mendoza, seeing as how the preview for it at the end of the Dartmoor Garden Show trailer had 47 in the black & white tuxedo set (a placeholder). The animal for it will be the cat. Wrath will most likely be in the Carpathian Mountains, based on the format of the level (take level 2 of the proloff parable, for instance) and the fact it would be the last season 3 location without a 7DS escalation. Having two in a row and a third overall in Chongqing wouldn’t make sense, but I do agree about the elusive target locations. Wouldn’t it be great if the undying came back again for wrath?

I think Wrath will be in Dubai

Probably far fetched, but my concept for Envy would be 47 competing with another skilled assassin on the field.

As we already have a multiplayer mechanic implemented from Ghost Mode, maybe it could be tweaked in order to make the other assassin an AI instead of Player 2, even if its kills were largely more scripted.
The mechanic to have NPCs being active snipers able to kill is already implemented too (Mumbai, Berlin, Mendoza)

In Hitman 3 alone there are two other assassins, namely The Vulture(Dubai) and Corvo Black (Mendoza), that could be the competitor(s).

Again, it’s far fetched, but the handler’s voice praising other assassins and shaming 47 to do better would be a perfect match to the Envy mission!

To me, Envy is obvious:

That’s more or less what I was thinking.

I can’t see 47 being envious of anyone unless they are being praised by Diana more than he is. Who or what else has he got, really?

It could be suit envy, I suppose, featuring the poorly rendered H2 suits: “Oh, 47, the Constant’s trousers are made from pure Merino wool whilst yours are polyester.”

For Chongqing’s ET, how would they explain why 47 is pottering around the ICA facility when he’s ostensibly still working for them in this timeline? Will Hush and Royce be removed? What about the other scientists and analysts?

Well, 47 knows about the ICA building and is an ICA employee, if not an analyst. Having him visit ostensibly to access some sort of archival record might not be entirely out of the question and would only require certain parts of the facility to be allowed without a disguise. I suppose the question with this is: do ICA employees in general know or know of each other? It could be quite a twist on a typical mission.

The lazy option would be to just have some idiot chef for the ET, or someone staying in one of the apartments, and ignore the whole ICA/Hush situation all together.

Not always. Procurers takes place after the main mission, Death In The Family.

Does it? I thought I saw (and almost got spotted by) Alexa Carlisle.

ETs timeline is currently a nightmare. As @Ibbe said The Procurers seemingly happens after the story mission (Zachary is being prepared to be taken away), but Alexa Carlisle can be found walking around.

As for Envy and what it means, courtesy of TV Tropes

Envy (Latin: Invidia ): Desire for Others’ Successes, as well as Hatred for said Other’s Success and the Desire to Ruin them. Hey, sometimes others get the cool stuff first. Doesn’t stop you from wanting it. Those that act on this tend to be thieves of any stripe (also driven by Greed). Other villains who qualify include The Resenter, the Clingy Jealous Girl or Crazy Jealous Guy, the Fairest of Them All, the Beta Test Baddie (also driven by Pride), the Green-Eyed Monster, the Yandere (also driven by Lust and occasionally Greed) and anyone who murders the hypotenuse or suffers from Tall Poppy Syndrome. Whereas Envy is a desire for what someone else possesses, Jealousy is the fear of losing what you possess. As such, they are easily and often confused for each other. Given the context, either can accurately refer to almost anything — a bauble, money, significant other, or baseball card collection. Taking pleasure at the pain or misfortune of another person is called Schadenfreude and is a demonstration of Envy. Envy is usually associated with snakes, dogs or goats and the color green. The punishment in Hell for committing this sin is to be put in ice-cold water. The patron demon of Envy is either Leviathan or Belial. Opposite of Kindness .

I think they’re just in a different timeline, don’t look too much into it, your head will explode

How I see ETs in the timeline is this: 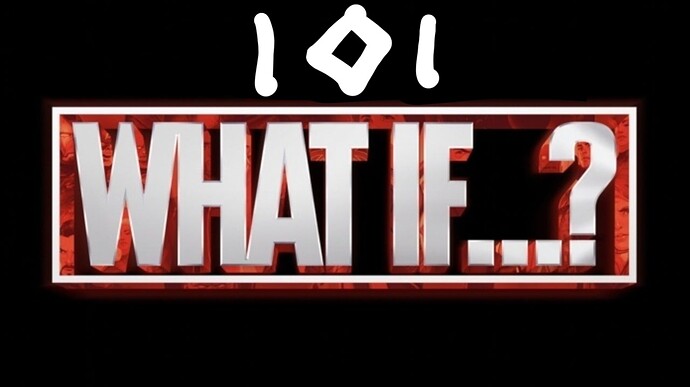 47 just happens to have a different contract at the time of the main mission taking place.

Thanks for the (sensible) chuckle.

It’s loose canon, the same as the old trilogy with Smith and all the other references. It’s as if the missions happened but not the main story plot. The same as a certain spy franchise. It’s also the best and fun canon type.

No please. Not the chameleon. He’s so boring. Please, the bookkeeper. He has a nice route. Big potential with him cuz it’s open kill options where as the former is accident (or poison) only.

That would be it, if this turns out to be exactly the same as the season of gluttony. If IOI are kind to us (and Travis’ little hint comes to fruition) we might also get:

This is all that’s been part of Hitman 3’s roadmaps so far, no new maps, special assignments, sniper maps or anything crazy. Who knows, it might be something interesting, but for now, this is all I’m expecting.