After everyone’s opinions since 7ds I don’t think anyone at IOI reads any hmf post, tweet reply, reddit comment or discord message at this point, so let’s just hope that tomorrow ‘The Collector’ turns into The Blackhat and we can have the much cooler Oliviroadmap

As for the contracts, Berlin is getting one featured contract while every other mission gets 6/7, which is really disappointing. Why have they got no love for Berlin!

so I just read the featured contracts proposal, as well as Travis’ reply so please ignore ‘‘After…’’ to ‘’…point’’. I would delete it but it got quoted

Just gotta have a look on the roadm… season rather.

Well, very few things. With three things we already knew (Greed escalation, The collector and the Berlin Egg Hunt) that take a great part of this season’s content. A little bit disappointed

. To be honest, I would expect a little more because of the additional week for the season format compared to the monthly roadmap

However, looking back to previous roadmaps from H2. For the first five months, we mostly get one (sometimes two) escalation contracts, one or two ET, featured contracts, one challenges pack and that’s mostly all (with additional few unlocks).
Instead of challenge pack, we get (paid

In conclusion, the expected content looks like what we got for the first H2 roadmaps. I won’t say I’m disappointed of the post-launch content. I will conclude when the H3 cycle will be finished. Let’s just hope that paid contents are very good and the amount content will increase over the future seasons. Time will tell.

At this point if i were an IO employee and i read these things, i’d probably cry myself to sleep after gorging on ice cream.

I actually enjoy the contracts that push the boundaries of what’s possible in the game. It’s pretty fun figuring out the different puzzles involved to solve these contracts. Might I interest you in “The Jeremy Blackout Privilege MK III” ?

The problem is the contract you referenced is designed that way. There is no indication that any of the Sponsored Contracts were designed with 5-star SA rating in mind. And seeing Easy Allies’s stream of there contracts raises doubt in my mind.

As I stated in the Featured Contract thread,

There have been FCs contracts in the past that have been difficult and stir up conversation, but SA was always achievable through patience, effort, and sharing strategies. Yes, there have been some sour grapes (why shouldn’t one feel a sense of pride in their submission), but ultimately the FCs were selected by Clemens.

The issue with the Sponsored Contracts is that it strongly appears that 5, and 5 contracts alone were submitted by each group, with no curation by Clemens. I am going off of the fact the Minmax submissions were sequentially numbered.

Challenging contracts from the community will always have mixed reactions, but care was always taken in their creation. You can’t please everyone, but some form of quality control/quality assurance with the contract greatly helps.

I have the Claw Hammer, Got it with the port over. Didn’t know there were issues of it not working for some.

I don’t think it was a issue with the transfer progress, but people can’t unlock specific items due to the lack of challenge/unlock method for said items. 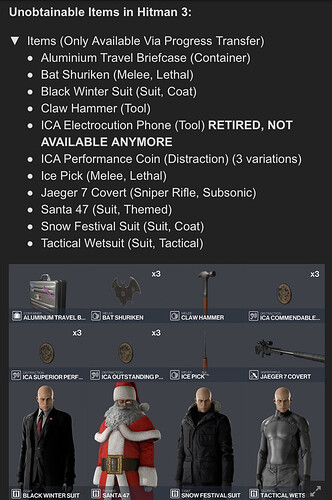 I just had to check myself as I almost never use it. It’s there correctly for me.

Damn, that roadmap is depressing. Why’d they even make us wait till the 8th when a lot of content was stuff from last month? And the 7DS continues to seem not worth much if Greed is just that lame escalation.

Really boring this month. Two Elusive Targets are okey, but thats it. No new rewards, just one Escalation. I am not a fan of FCs.

IOI are now independent and they pay for their own marketing now.

Gaming websites and You Tubers are free advertising.

If you are IO, it makes complete sense to have gaming websites or youtubers create feature contracts, to extend their advertising reach, especially in the first few months after release.

IOI know that their community of fans are loyal, and the loyal ones will create their own contracts, featured and advertised amongst the community without being designated by IOI as official “Feature Contracts”.

It shouldn’t be considered a slight to the community who can continue to submit their own contracts. IOI had solicited community-curated contracts before, and they likely or maybe will do so again. It will appear more special for IOI to restart community-curated feature contracts down the road, and not exactly fair to IOI that everything that they tried before is precedence setting for what they should always provide every monthly roadmap in the future.

They should just expand the ‘content creation’ functions, let us limit loadouts, enforce loadouts, starting points and various other things. I think if they opened up ‘escalation creation’ the community could come up with some pretty sweet stuff. Imagine the potential if pc players had full access to item placement and options to choose where to put enforcers.

No need to even let them share it straight away, it could be sent to a small team for approval or tweaks , community and developers working in tandem.

wish they released a tease for the rest of the sins to know what to expect for people who might think of buying it.

Now I see why it’s called season of greed

A bit of a let down and considering now we have to wait till mid May probably for the next roadmap, it’s nice that the Elusive Targets are so close though, i wish they would just put a new one out every 2 weeks

The Collector no reward confirmed…

Might be added retroactively.
But I doubt as well

The Collector no reward confirmed…

You expected a reward? Don’t be so greedy.

I was 95% sure and am still disappointed ngl