Here’s a place to share quotes with the rest of the forum. Any kind of quotes; famous quotes, quotes that should be famous, forgotten quotes, funny quotes, a quote from your personal life that you feel others should know, even an estimated price quote if you’re feeling particularly silly.

Didn’t see a thread like this anywhere with the search function, so if there is one already and I missed it, my apologies and can you please direct me to it.

Personally, when it comes to rights, I think one of two things is true: I think either we have unlimited rights, or we have no rights at all. Personally, I lean toward unlimited rights. I feel, for instance, that I have the right to do anything I please. But, if I do something you don’t like, I think you have the right to kill me. So where are you going to find a fairer fucking deal than that? So the next time some asshole says to you “I have a right to my opinion,” you say “Oh yeah? Well, I have a right to my opinion, and my opinion is you have no right to your opinion,” then shoot the fuck and walk away.

George Carlin, It’s Bad For Ya

What the fuck did you just fucking say about me, you little bitch? I’ll have you know I graduated top of my class in the Navy Seals, and I’ve been involved in numerous secret raids on Al-Quaeda, and I have over 300 confirmed kills. I am trained in gorilla warfare and I’m the top sniper in the entire US armed forces. You are nothing to me but just another target. I will wipe you the fuck out with precision the likes of which has never been seen before on this Earth, mark my fucking words. You think you can get away with saying that shit to me over the Internet? Think again, fucker. As we speak I am contacting my secret network of spies across the USA and your IP is being traced right now so you better prepare for the storm, maggot. The storm that wipes out the pathetic little thing you call your life. You’re fucking dead, kid. I can be anywhere, anytime, and I can kill you in over seven hundred ways, and that’s just with my bare hands. Not only am I extensively trained in unarmed combat, but I have access to the entire arsenal of the United States Marine Corps and I will use it to its full extent to wipe your miserable ass off the face of the continent, you little shit. If only you could have known what unholy retribution your little “clever” comment was about to bring down upon you, maybe you would have held your fucking tongue. But you couldn’t, you didn’t, and now you’re paying the price, you goddamn idiot. I will shit fury all over you and you will drown in it. You’re fucking dead, kiddo.

You know who it is.

Actually, no, I have no clue who that is. Please tell me it’s a fictional quote and not a real world one.

Yeah, I’m wondering who wrote it too, and if it’s not fictional then hopefully that person got fired.

It is the navy seals copypasta. 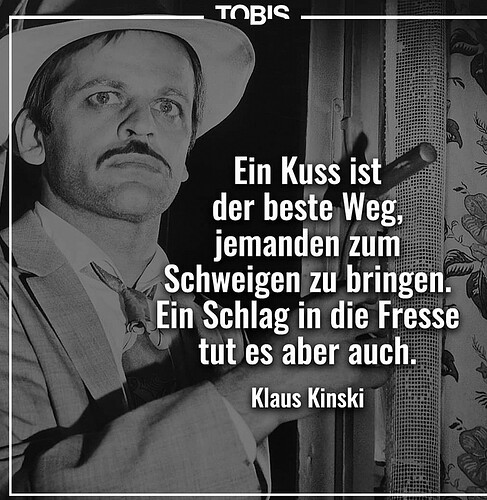 German Actor and Sociopath Klaus Kinski said “The best way to shut someone up is a Kiss. A punch to Face will do just fine too, tho.”

“The sun smiles at you with eternal malice. There is power in your misery.” - Cruelty Squad

“Until now, we have dwelt on the past
But before we arrive at the last,
Here’s a dozen quick takes, about rascals and rakes,
From our reprobate present day cast.

Ted Cruz, that lardaceous baboon,
Is the Maestro of inopportune.
With his state in deep freeze, this titan of sleaze
Took his family off to Cancun.

Giuliani, a freak among freaks,
Tends to blunder whenever he speaks.
But his clumsiest mess, was in front of the press:
Just For Men trickled down both his cheeks.

Joel Greenberg, and buddy Matt Gaetz,
Share several libidinous traits.
When both of them score, they tend to ignore
The age of consent of their mates.

Each McConnell political act,
Has a physiologic impact.
For Mitch, legislation connotes constipation,
Of the nation’s intestinal tract.

From these verses, you might be inclined,
To consider each target maligned.
But compared to their smears, of the recent few years,
My words have been overly kind.”

If he weren’t dead, I’d tell Hawking to go fuck himself.