Hello! Sorry for the absurd amount of questions, but I would be extremely grateful if someone could help me out with something. As you know, quite a few missions in Silent Assassin are situated in non-english speaking countries, therefore the context and meaning of most NPC voice lines and dialogues are lost to anyone who doesn’t speak languages like Maylasian or Persian. The examples include an Italian cook in Giuseppe’s residence who talks to herself, a heated argument that Colonel Amin has with the vendors on the bazaar and a scripted conversation that two guards have in Ahmed Zahir’s house after you take him down silently. In the Hitman Contracts BETA Images and discussion, someone has mentioned that even though Lee Hong and Zun’s conversation has no subtitles in the game, they can be found in the files. Could you please find out if there’s something similar in Silent Assassin, i. e. a script of voice lines for different NPCs that can either be translated later or have already been translated by the developers in the game’s files, or could you translate a few prominent guard/civillian/target dialogues like the ones I have mentioned above?

Listen, if you provide me clips for the ones in Italian, I can translate them directly. I speak it natively and have been playing SA since '06. As far as I know, there is nothing in the game files or in the wiki with translations. Sorry for the week-long delay, I don’t use the forum much anymore.

Hey there! Don’t worry about the delay, it’s not a big deal. Here’s a link to my channel (Steven SeBoom Boom - YouTube), there are two videos with the Italian speech (Don Giuliani starts speaking at 2:28 in the “Don Giuseppe Playing Golf”). I’ve also discovered an unused conversation buried in the game files that I believe was supposed to be a dialogue between Vito (Giuseppe’s brother) and Gucci (his son) whick implies that the female chef in the kitchen might be Don Giuliani’s wife/mother. She’s referred to as “Mama” in the audio files.

I speak Russian so if you record a video of Russian dialogue, i can transcribe it.

Thanks for suggestion, but I speak Russian myself, so that’s unnecessary. As a matter of fact, if someone needed transcriptions of the Russian dialogue from Silent Assassin/radio announcements from Bjarkov’s Bomb, I would happily translate it for them.

Lol, I should have known judging by your nickname

A little bit of an “easter egg” for the fellow speakers:D

Someone might need to double-check this but I believe you can dig through localisation files of each level (there are programs you can download online for this purpose) and find a translated version of most lines said by people within them. Same goes for Hitman Contracts.

I remember the cook in Anathema actually being Giuseppe’s mom, not some random mafia servant. She occasionally grumbles about the mafiosos.

Yeah, I’ve managed to translate some of the cook’s lines myself. In the unused dialogue between Vito (Giuseppe’s brother) and Gucci (Giuseppe’s son), Vito refers to her as “Mama Giuliani”, which adds even more credit to this claim. Also, she mentions Vito really liking her lasagna and drinking a lot of red wine on occasion.

Regarding the localisation files, do you know any programs capable of extracting them? I already know about the Hitman Audio Tool, but it only offers audio files in their original languages. Is there someone on this forum who mentioned these programs/left links to them in the past?

Fairly easy to figure out how it works.

I believe every level has the files readily available in the game folder, just need to search for them. This program merely extracts what’s within those files.

Thanks for the program! I’ve checked it out, but whenever I paste the code (loctool.exe c mainmenu.xml mainmenu.loc) into the command line, it says it couldn’t find the file, although I’ve installed the whole thing.

I do remember it being very finnicky about that but I managed to make it work through some wizardry that I can’t seem to recall. The answer wasn’t that complex though.

I’m unlikely to get to my PC before tomorrow though but I’ll make sure to try and sort it out again and tell you what the issue is if you don’t figure it out beforehand.

LocToolbadtutorial1400×400 11.6 KB
Had more problems than expected, program didn’t even want to start via conventional means so I had to improvise. Here’s what I typed to turn a LOC file into an XML file. You first have to extract the LOC file from the level’s zip found inside the scenes folder in the game’s directory.

As for Murder at the Bazaar, I cannot find this “heated argument” between the target and a shopkeeper but I did find the guard conversation

Perhaps this 2nd photo? It seems more meant to be directed at 47 though, not a dialogue between two NPCs. 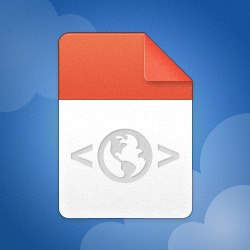 MediaFire is a simple to use free service that lets you put all your photos, documents, music, and video in a single place so you can access them anywhere and share them everywhere.

Here’s the file, check if you can download it.

I honestly can’t thank you enough for your contributions and overall help, it’s immeasurable! I’ve downloaded the file and was able to view it, but when I type the path into the command console to run the loctool, it says something to the effect of ‘C:\Users(My Name)’ is not recognized as an internal or external command, operable program or batch file.

Shit, I’ve just found the correct pathway to the loctool, but, unfortunately, the app simply cannot run on my system, it seems to be too old… 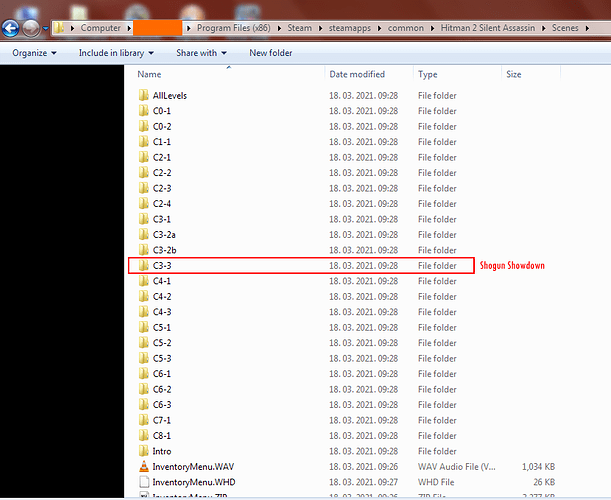 1831×679 83 KB
First go to your Hitman 2 game directory and then the Scenes folder. This is mine. Open up for example C3-3 which is Shogun Showdown.

3792×336 53.9 KB
Extract the LOC file somewhere and rename it. In my case, I extracted it to the same folder where my loctool.exe is and renamed it to ShogunShowdown.LOC 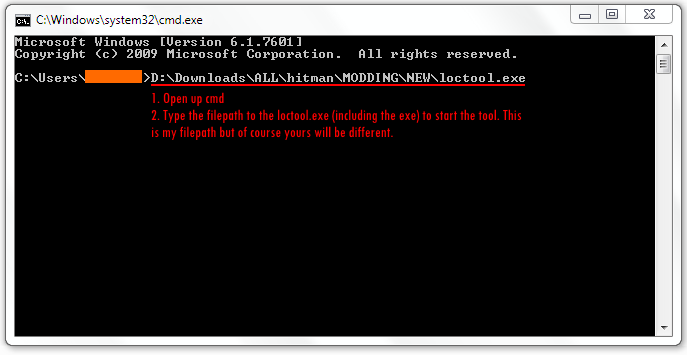 Open up cmd and do as told in the image. Type the filepath to where your loctool.exe is so you can start the program. Include the exe in what you type.

51600×355 11.6 KB
The program should start inside the CMD. First, type the same thing again (filepath to the loctool.exe and include the exe) then “x” to tell the program what to do (in this case convert LOC to xml).
After “x” type the filepath to where your renamed LOC file is and include the name of the file itself. Mine is, like I’ve shown, in the same folder as the loctool. Make a space and then type the filepath to where you want the xml file to be, along with the name you want for it. Once that’s done, press Enter

The xml file will appear where you typed it to appear. In my case, I wanted it to appear in the same folder as the loctool.exe and the LOC file.

71359×606 75.4 KB
Voilà! Most LOC files are identical on the upper halves so you have to scroll down near the bottom to see what’s unique for that level.

You can repeat this process for any SA, C or BM level.

Once again, I never expected anyone to invest so much time into helping a random moron on the internet, I’m immensely grateful for all the help you’ve given me, but it seems like I’ve ran into the ultimate obstacle, and I’m pretty sure it’s kind of insurmountable - when I type in the pathway to the loctool, the pop up informs me that my system cannot run the app, since it seems to be too old to work on the modern systems. I’m not sure if there’s any way to remedy that…

I’m willing to provide you with any xml files you might want to take a look at. I already have most of them from Contracts but there are few from SA and BM aswell.

If it’s not difficult or time consuming, could you please provide me with the xmls from all the Hong-Kong missions from Contracts, Romanian missions (Asylum Aftermath and Meat King’s Party), Rendezvous at Rotterdam and Traditions of the Trade (Contracts). Regarding Silent Assassin, I would be really interested in Anathema, Kirov Park Meeting, St. Petersburg Stakeout, Invitation to a Party, Tracking Hayamoto, Graveyard Shift and Tunnel Rat. Thanks in advance, and if there’s anything I can help you with, just ask!