There’s been a small thing about the inventory that’s been bugging me for a while now. When we look through the weapons list to choose which one to bring with us, a vital info isnt shown… and that’s the magazine capacity of gun and the total ammo they have.

), Guns should show their ammo in the ssame corner. See the mockup I made for exemple. 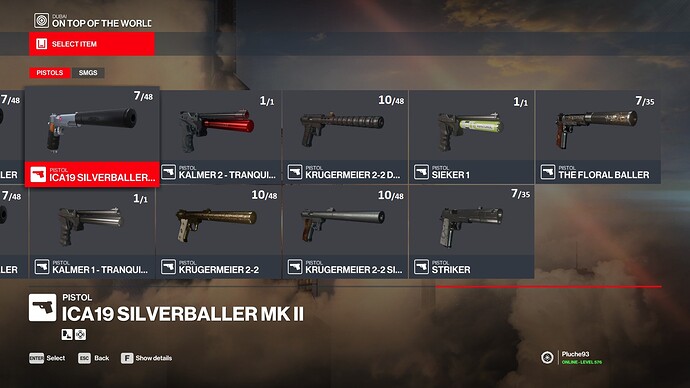 I feel this would help differentiate weapons such as the floral baller having only 35 bullets while the Silverballer has 48. It would also help new player understand that the Kalmer is special and only has 1/1.

Would also be quite usefull while looking at the guns in freelancer before going on a mission since they have 999 bullets while in the safehouse!

While on the subject maybe it could also bring a rebalancing of the guns to make some of them more unique, like a gun having bigger magazine for example.

Anyway, I feel it would be easy to add and quite useful. What are your thoughts?

(sorry if my english isn’t perfect, I dont speak it everyday

That’s a great idea and I’d love to see it implemented. Shouldn’t think it would be that tricky to do either from a dev perspective, it’s not like those numbers aren’t known/in-play behind the scenes.

Interesting idea, but i don’t really see the potential. I think that most of the players already know the difference between the ammo of a tranquillizer and the ammo of a normal pistol. I also think that this would make the weapon category a bit messy, with all the numbers on screen.