I’m going to be crazy.

I own Hitman 2 on Steam and Hitman 3 on Epic Games.
I spent some time trying to merge the two accounts on my ioi account, which I finally managed to do. Even with that, none of Hitman 2’s missions were unlocked on the 3 and no progress was imported.
Then I come across a box on Hitman 3 that tells me that maybe I can transfer my progress from the old games.

I tell myself that this is what I was looking for, so I start to make the transfer.
Magic, it took away my entire progression from Hitman 3, replaced ONLY by that of 2, without giving me access to the mission of Hitman 2.

(I bought the game two days after release, so like everyone else, I think I have the access pass, right?)
On top of that, the support for IOI is incomprehensible.

Thanks for reading me.

There is no update on when h2 access pass will be free also it was mentioned during the carryover would reset all h3 progress. 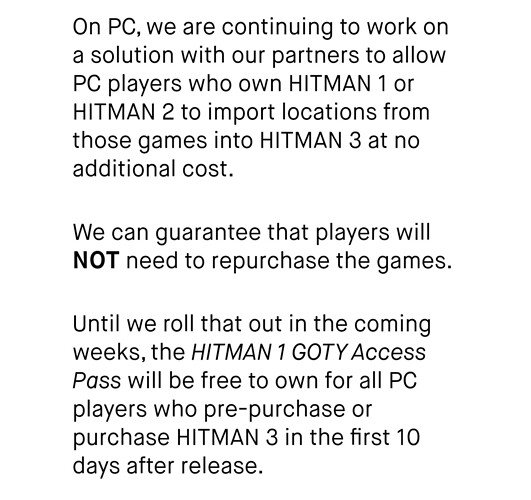 Thanks a lot for your answer,

I had not seen this information, incredible choice not to allow free links between games, and wonderful choice to go on an Epic Games exclusive, I really like Hitman 3, but not at all these choices.

At least they announced they will give us all Hitman 2, even if it’s after a delay. The progression carry over sounds like a pain but at least it was available. I liked that I could ignore it, gives me a fresh reason to replay maps. Anyway… not defending stuff, it should be easier, but at least it’ll get there in the end.

I don’t really mind the Epic client, seems about the same as Steam to me. Granted I don’t really use Steam’s social features so that’s probably why.

Thank you for your answer.

It’s true, but in the meantime they let us flounder and it confuses a lot of things, I almost bought the access passes for a while, not understanding any of this.

But as you said, finally replay the maps is not disturbing in Hitman, it’s more the wasted time that I spent trying to reconnect all my accounts and make the links between the games to zero results that bother me, not really the progression of H3.

And I liked Steam because my previous Hitmans were on it, I liked having everything nearby and not having to wander from one launcher to another.

I’ve always used GOG whenever I could because of no DRM, so I guess I’m used to multiple stores. I get that it stinks for Steam fans though, I can understand that. I don’t think the Epic Store is going anywhere though, for better or worse.