I am on PS4 and haven’t been able to connect since launch this is truly the biggest blunder I could’ve expected and I actually pre-ordered this unplayable scrapheap. Nice

Hello! I was playing the Chongquing level yesterday afternoon on PC (Hungary) when the server went offline and I can’t go online since. Is there any way to contach support? That server status page shows online status.

Bump? I’m utterly unable to connect and I’ve been trying for about 2 hours (worked fine about 8 hours ago). hitmanstat.us says there are outages everywhere, but they’re mostly on PS and it claims the PC servers are up.

IOI, I’ve been largely indifferent to always-online in the past (mostly due to ignorance, tbh), but this entire shitshow of a launch should tell you that this trilogy needs to be offline-compatible.

Similar situation here. The game disconnected while I played and now won’t go back online:

Me too. I was playing just fine for most of Wednesday and part of yesterday and then last night, boom, offline and been that way ever since.

Doesn’t help, Sorry. Apparently PC Severs are fine all the time, when there’re clearly not.

The error I’m getting is: 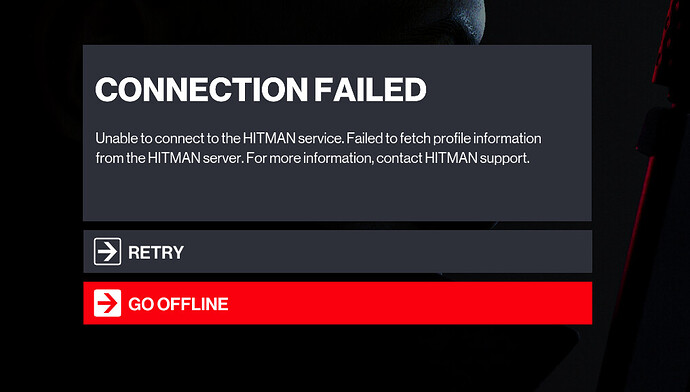 For whatever it’s worth, it feels to me like this is a profile corruption problem and not a server online/offline problem. Other players are able to play, and creating a brand new profile has apparently worked for some people. Don’t know how/why the profiles are corrupted, but that seems to be the issue. Now if IOI would fix it, that would be great.

Apparently it’s happening for both PC (me and others) as well as PlayStation players. I don’t know if I’ve seen any Xbox players reporting this yet though.

The FAQ in the launch guide is now updated with a statement that they’re trying to fix the issue (for PS players at least - no mention of the PC side). HITMAN 3 - Player Guide - IO Interactive

So we really do just have to sit around and wait for IOI to come up with a solution for it.

There’s no point in playing because none of the progress I’m making is saved and creating a new profile would eliminate the point of generating any in the first place.

That’s where I’m at for now too. I was trying to get through one of the escalations. Until this is fixed I guess i’ll just wait.

Epic Games is now downloading 470 MB for me. Nothing listed on Patch Notes HITMAN 3 - IO Interactive. I guess it is the patch listed for yesterday?

They had posted on Twitter or somewhere that they were going to fix the issue with deluxe content not appearing properly on the 22nd (today). It is probably just that. Although if we can’t get into the game, that content doesn’t matter as much…

Been like this all day, was right in the middle of the last mission as well. Agree with likely profile issue.
Though I wish IO Interactive would least acknowledge the problem officially on their Twitter or Website.

If memory serves that part of the deluxe content should appear on the rewards and bonuses tab on https://account.ioi.dk/ when they’ve got that fixed.

Guess I’m going to bed. At least I was able to wander around these amazing environments… unable to do anything.