So the pre launch guide says new rating system on playstation is the reason that preoder is not available in Asia but the game is available.when it is out.
Does it support the languages of those region? Also, there isnt a way to get the oreorder bonus trinity pack in those region?

Ppl on Twitter asked them about it and they just told the guy to f off, and now we know it’s because they knew they won’t offer preorder for SEA PSN, and there’s no reason to offer the bonuses then.

Or maybe they’ll offer us the Trinity Pack for $20, seeing how they’re desperate for cash by making PC users to buy Hitman 2 again even if they own it already.

hmm, they actually said f off to their potential customers!?

Of course not, but the recent announcement isn’t very satisfying either. You know, things like we Asian PS players don’t get to pre-order, PC players have to pay again to gain access to H2 maps, etc.

Does it support the languages of those region?

I did hear a rumor about Chinese will be supported by the end of the month. You may check this post to know further:

Localization for Russia and the CIS Hitman 3 (2021)

In China Taobao, which was web shop like ebuy. A PS physical seller said the Hitman 3 will update the Chinese after the game release 2 weeks. [1]

Unless it’s not a photoshop-fake, I’ve seen a screenshot of them telling so some time ago.
Happened on reddit, I believe

not quite, but they never answered that Josh guy on Twitter if they’ll find a way to offer Asia PSN users the Trinity Pack and PS4 theme because they never had the chance to preorder, and Josh just kept asking, and they finally replied and said stop “SHOUTING” at them.

Now we know the reason is because they don’t want this to be noticed by anyone so they can protect their reputation. Didn’t work out so well now since they still shoot themselves in the foot.

cuz they’ve been trying to hide the fact they never planned to give South East Asia PSN users the preorder bonuses(Trinity Pack + PS4 theme), but thanks to Josh they finally had to mention it in the pre launch blog post.

Judging from how they’ve been lying this whole time, big chance they will be secretly telling ppl on Jan 20th, that they decided not to release it on South East Asia PSN due to various circumstances out of their control. 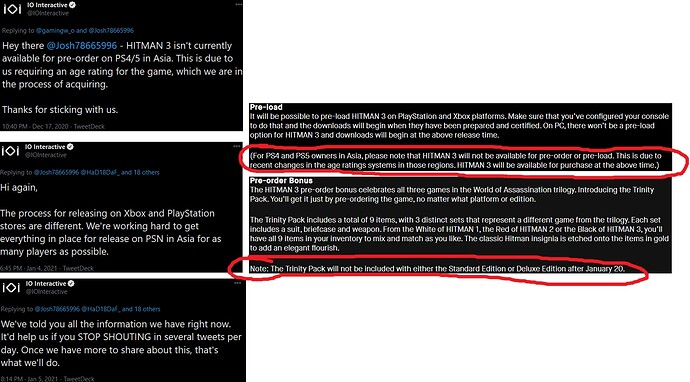 So the embargo is up and also someone on the net got thier copies earlier. Are there any update information regarding the supported languages?