"the Classics"-progress throughout the trilogy

Let’s compare, agents!
As you can see from my overview, I am not particularly fond of the Hitman 2 maps. However, Miami is probably the easiest “the Classics” on the entire trilogy.

How is your progress coming along? What’s your most wanted “classic”-item? What is your most typical load-out?

Do you require help, from the likes of say, MrFreeze2244?

For me, my most wanted classic-item is the Classic All-Black Suit. It used to be the ICA Woodsman Rifle Covert, but then I reached Mastery 20 on Chongqing (How good is that Leviathan rifle?!!)

I’ve gotten some help from MrFreeze, a brilliant SA/SO-presenter. But I have also done some of the missions solo. The question-marks in the spreadsheet are suggestive as to whats next, in order to unlock all the classic-items. 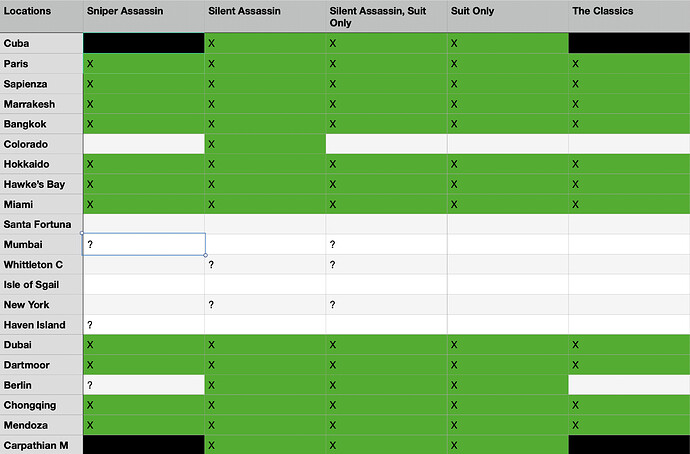 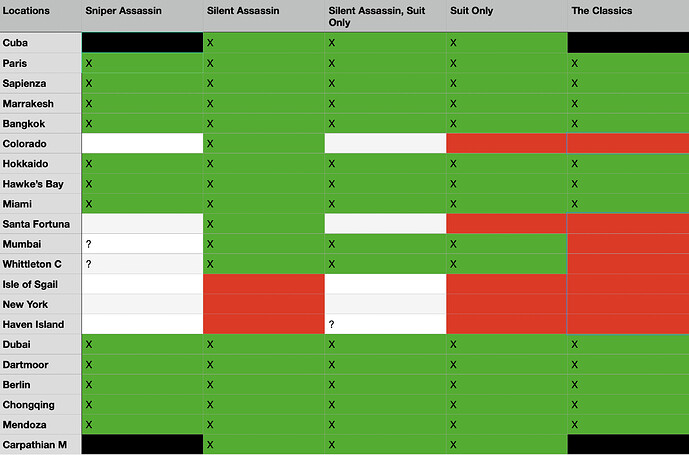 Updated after I managed to snag SA/SO on both Whittleton Creek and Santa Fortuna.

Now I only need one more SASO, and two more Sniper Assassin, and “the Classics”-challenges are completed as to the rewards provided.

So my options are shown in white, reds are put away (for now), and green are the ones I’ve completed. And I am going to need some easy suggestions as to which of these I’m going to do, in order to get the Classic All-Black Suit & ICA Woodsman Rifle Covert.

So, post your progress, and pretty please, give me some suggestions!

I had all classics done in Hitman 2 for all maps, and the biggest pain in the butt by FAR was master SASO in “Embrace of the Serpent.” Good lord was that an endless grind.

Well luckily, IO removed the difficulty-requirement, so that I was able to do it as well. And I have to thank MrFreeze2244 for helping me achieve it in the end.

I’m not much of a Silent Assassin. I’ve been able to do a few runs solo on Hitman 3. But on Hitman 2 I had nothing to show off in regards of Classics-challenges.

Any suggestions on which of the maps are the easiest to achieve this on?

Of the ones you have left, I’d say New York. Sniper is easy, you can get her at the entrance of the level after getting the data and then just immediately leave. As for suit only, there are pretty clear routes in your suit and the vault is easy with the chloroform opportunity.

I remember Haven and Sgail bring a pain.

I only see one problem though. I have to carry the data-core in the open, to be able to have my sniper with me in the suit-case; or I have to sniper-rifle on my back, and data-core in the briefcase, in either case; I’ll draw a hell lot of attention! (Will I not?)

I believe I carried the core to the entrance and left it there while I went back and got my rifle. You could also get the three backup discs instead. Sniper doesn’t require suit only so it’s easy to do this.

If you want to do SASO and sniper at the same time it would require more effort. I’d probably sneak to her office and take out her guards as they are made available, then snipe her close range in the back room and leave the weapon. Never did this though, just spitballing.

This is a personal thing, but “the classics” are the first thing I do for every map before moving on. For me, it really helps me to “learn the map” especially to understand what is “trespassing” and what is not. As for using outside help (like Mr. Freeze or other Youtubers), this isn’t something I do as I want to accomplish the SA/SO on my own.

Yeah I’ll look at a video if I’m completely stumped for a long time, but otherwise the fun is figuring it out yourself. I save the classics 'til later though, when I know the map. Well, I did them early in Hitman 3 actually because SASO was a lot easier this time around, but in H1 and H2 I needed to know the maps more.

Thanks for the tip mate, decided to have a go at it myself. It took me some time, but darn it I made it! Classic All-Black Suit achieved!

The sniper-rifle can wait. I’ve got a better one already unlocked…

Okay, yeah, never mind! I did that one too! 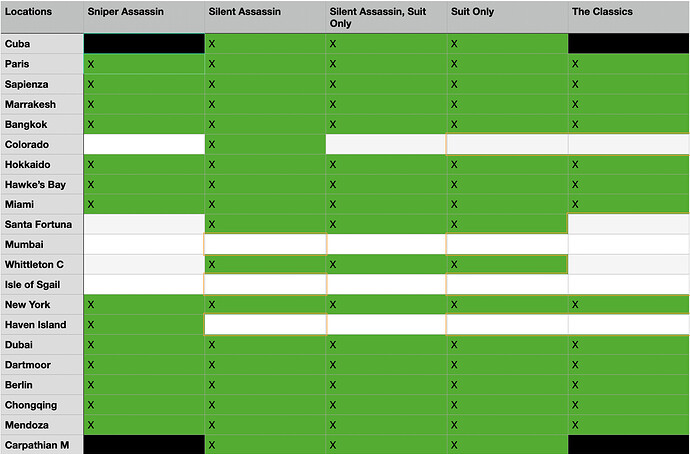