As for meeting for a pizza, dunno, 47 always scolded Diana and pretty much everyone else who met him in person since it would be too dangerous for them.

That was grumpy young 47. The new one is happy to meet at airports and honestly I’m sure he would have been happy to meet in public earlier if it included free pizza.

It may be highly inappropiate to focus to much on Diana’s appearances. So I’ll say this: The artwork Diana is spectacular!

Mendoza is my most played H3 map because of those LEGS

I wonder when they really started to care?

We see them meet for the first time in the training level. Diana is curious about him (“What did it feel like, taking lives?”) and she knows she’s got something good on her hands. (“I told you he had talent.”) So she watches her agent to be fly through every training scenario they throw at him as Soders gets more and more creeped out (“Power like that with no moral restraint?”) and desperate to flush him out of the system and move on. But our girl’s not about to give up on someone that talented (and good looking) without a fight. So she helps him win.

And now, for the first time that he can remember, 47’s got himself at least an ally, if not a friend, so he lets his guard down just a tiny bit and gives her some personal information, his name. He goes back into the world and resolves to let her find him his purpose and that’s all well and good until she unwittingly reintroduces him to his torturer. Understandably, from our omniscient POV, he’s traumatized to hell and back, freaks out and disappears for 2 years.

But from Diana’s perspective, she’s just lost everything she staked her professional reputation on and a fairly close personal relationship (with Soders) on so she’s understandably un-fucking-impressed when he calls her up out of the blue wanting a goddamn favour to find a friend. 47 made a friend?? But she’s not about to waste a good thing when it waltzes back into her life, no matter how entitled he seems. So she puts him to work rebuilding her standing within the Agency and, in the process, drives him to see that he’s meant to be a killer, no matter what else he may want.

Then BM happens and we get to see him grieving the loss of a normal life the only way he knows how - by being fucking furious with everyone and everything connected to the assassin life. From his perspective, and possibly rightly so, she’s making him be something he doesn’t really want to be. That’s not a great position to be friendly or unguarded around someone. He acts out, tries to put distance between them (“I’m sorry to hear that. Where’s my money?”) but at the same time, he can’t help but trust her. She’s the only friend he’s got now so of course she can get in his personal space when he’s agitated. Of course she can touch his Silverballers without arousing suspicion. And she uses that trust to “kill” him. Even after seeing why she did it, I think that was a serious blow to their relationship.

And then she betrays his trust again by not including him in her plans to rescue Victoria. He was in danger, cut off completely from his one contact and his employer almost destroyed without so much as a hint at why. That’s it, he’s done. He can pull the trigger and get her out of his life permanently. Totally. No hesitation. It just takes him a couple of times to get dressed, undressed again, and then finally to leave his motel room and make his way to her, all the while numbly telling himself “this is what I do.”

But he can’t do it! He needs to know, so he kneels on broken glass to hold her hand and comfort her as she tells him that she, effectively, did it for him. With Tetra clearance, she was finally able to read his file and to see that Travis was doing it to someone else so she snapped. I genuinely think this was the one trauma she couldn’t “rapidly metabolize” because, as much as she’d used 47, she also fallen quite deeply in love by that point. She acted rashly, killing the newly rebuilt ICA again, and lost the ability to contact 47 until it was too late. Why did she have a letter ready to go? I think she knew he would come for her like a target.

But she was never just another target. He nearly kills himself as the grief and the guilt threaten to overtake him. But he can’t do it, can’t ignore what is possibly her last request. He’s not great at it, makes a lot of dumb mistakes without her there to guide him, but eventually they make it. And so does she. He kills Travis for putting them all through this and, in so doing, kills a lot of the bullshit he’d been carrying around since leaving Gontranno.

Now, where do they stand? He watches her from afar, through his scope at the end of Absolution, no doubt meaning to protect them without forcing her to look at him. But then we get the Legacy cutscene.

The only other person in the world who knows him is back. Grey has been watching him for years, seeing how close they’ve become. They’ve gone from email briefings, to meeting in confessionals to openly sitting next to each other in public. It wouldn’t take a genius to figure out that there’s something there. You can tell by the careful way Grey asks “Does your Handler?” that he knows Diana is special to 47. And just look at the way he watches her leave, and then lowers his head like he’s been rejected. 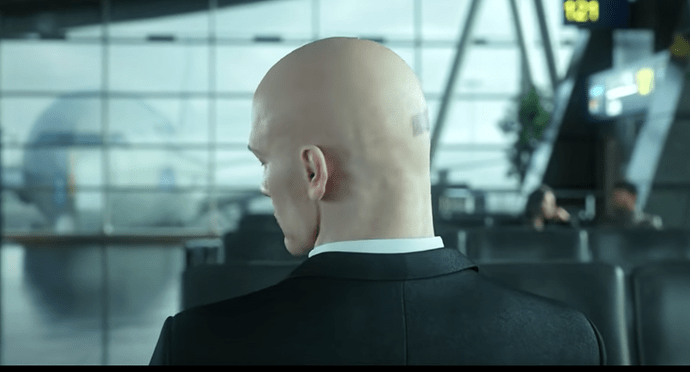 He wants her to turn around, to regret leaving him as much as he regrets having to let her go.

But it’s not until he gives himself away after Bangkok that she realizes it. He doesn’t care about politics but he cares about her tones. For someone as tightly repressed as 47, that’s a huge admission. She picks up on it right away. And what does she do with that information?

From there on out, it’s nothing but extended family vacations, working together to Bring Them All Down and finally giving him the freedom to choose, to be her equal so they can become the World’s Most Terrifying Power Couple Here to Ruin Your Day.

3 posts were removed from this thread because I am not interested in it becoming forum members asking other members to engage in basic courtesy. If you liked the first of the removed posts, or you’re confused why this happened - I strongly recommend you read the Civilized Conversation Primer.

Then BM happens and we get to see him grieving the loss of a normal life the only way he knows how - by being fucking furious with everyone and everything connected to the assassin life.

I just wanted to say that this is the best explanation as to why 47 acts very differently in BM that I’ve heard.

That’s a really nice write-up @Bourbon! I’m on board!

I think there are three Dianas. The one pre-2012, Absolution, and the WOA Diana. I prefer the new Diana the most because she has more personality than in the previous games.

Diana… aka Jane Perry’s voice is… to die for

An odd question: does anyone else feel that Diana’s black gown in Mendoza doesn’t go particularly well with her hair? Navy, to my eye, would have been far more flattering.

Black is more classic though. It’s considered more neutral since very few skin tones or hair colours don’t look good in it and the affair was fairly formal.

This is more or less the correct place for this.
Jane Perry is now on a website called ‘Cameo’, which seems to mean that she makes personalised videos for a very reasonable charge. I imagine some of us may want personalised Diana videos!

hoping these are seen as wholesome and not weird.

i got an app that does smiles and paid for it for a month so i’m having fun with it. anyway, it would have been nice to see diana laugh in mendoza. i guess it would have been out of character for this part in the story, but it’s nice to imagine her letting loose once in a while 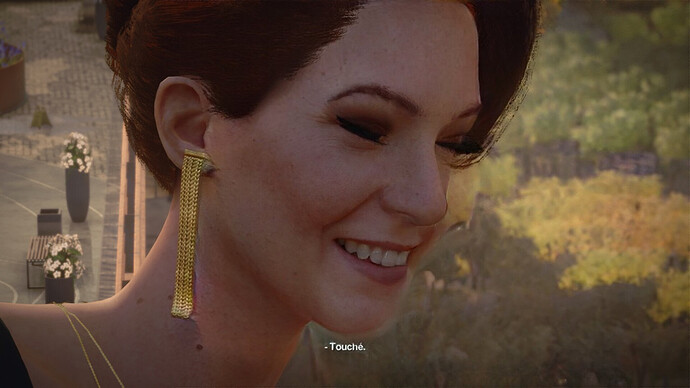 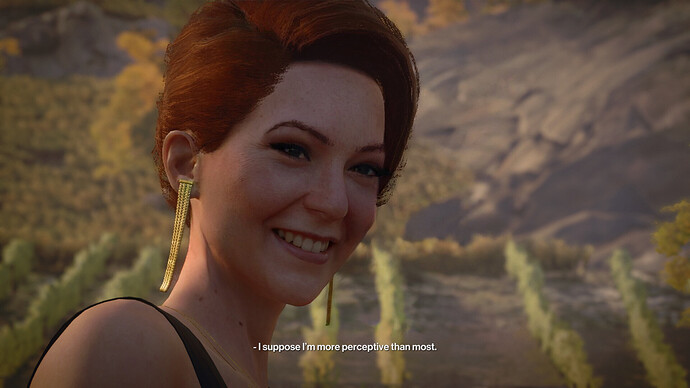 This must be a rather good app: the smile looks so natural! Sometimes people post pictures of 47 with a crazed, obviously faked grin plastered across his face!

Well shit, I guess I have to change my caption now.

I’m a pale imitation of your last partner, I know

Even demons respect our Queen