A thread to discuss and post about the legendary GTA series in its entirety, whether it´s the top-down originals, the 3D trilogy (and its spinoffs), or the HD era games. Share your opinions, memories, tips and experiences, post news, articles, videos, etc.

Ah GTA, played it ever since I started going to NetCafes back in ~2003. Whenever I didn’t feel like playing Counter-Strike, I’d be playing Vice City. I wouldn’t do missions or anything, just mess around the city and use all the cheats that I’ve learned of. Sometimes a passerby would ask me if I want to see a neat cheat and he’d type it and my car would start flying. Good times. I also remember checking GTA 3 during that period but it didn’t click with me, too drab I guess.

Around 2005 me and my hombres were all excited about San Andreas, were kinda pissed that it came one year later than the PS2 version. A friend managed to get it (pirated) on 4 / 5 CDs from his teacher but one of the files on one of the discs was corrupted

. Managed to play it afterwards. 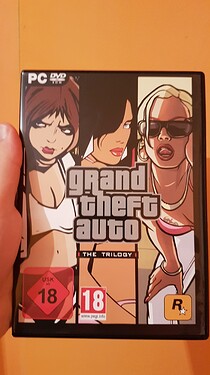 GTA… I remember an era back in 2009-12 when San Andreas was in every PC, even clericals had it. I was around 5 the first time I played it, and ever since it’s a wonderful memory in the corner of my mind. I wouldn’t have done missions of course, just “go, kill, drive, fly, cheat, repeat”.

I always enjoyed GTA, especially Vice City/San Andreas/IV, though the longest fun for me was when I learned of the multiplayer mods of San Andreas and the community of it. There was a roleplay server I was active on for ages where you could join different fractions (police, the gangs, army, etc), do fitting jobs, and the whole server evolved into it’s own ecosystem. Really cool and not comparable to what the official online mode is these days. I even had my first programming experiences there when I attempted to make a more realistic weather addition to it.

I also enjoyed GTAV single player but did not stick to it for long. The multiplayer there is just so random and the players are not mature enough for me to enjoy it more. That, the milking of existing titles and how Take2 is fighting the modding scene makes it feel like it is a new age in the series I am no longer a part of.

I would have to go back to university in the 90s and the original top-down GTA for my introduction to the series. I still have that game and the London expansion. I skipped over 2 for some reason, though I would get it years later.

For the GTA III games, I have both the PC versions and the Xbox versions. Yes, even the launch PC version of Sam Andreas that can be modded for Hot Coffee. It was funny and memorable for 5 minutes, but not that great, maybe because I was almost 30 so stuff like that wasn’t forbidden to me.

IV and V have been console only for me. It came down to spending and constantly upgrading PCs or a flat cost for a similar experience on console. Also, I do a lot with computers for work and a console is a more relaxing break.

This is nice! Since we are going into memory lanes here (no, not the bowling alley

Let’s get started with VCS:
I got VCS on PS2 was because I thought it being the last game of 3D era, it would be the most advance. Well it turned out not being as much advanced as SA, but it still left me with good gaming experiences. But man, the game has an interesting group of characters like Reni, and taking part in Phil Collins’ live concert was unforgettable! It was also the first time I played a game with shooting mechanic, so it was pretty hard for me too.

IV & EFLC:
I was astonished by IV’s very realistic looking, despite my PC was shit and I couldn’t pass the sequence of Niko climbing the heli in the final mission (hope this doesn’t spoil someone who hasn’t played

). But this game remains my favorite of the series, and it’s not just for detailed car lists and manufacturers. Liberty City is a vividly living place with many places to go and people to meet. And contrary to the most, I enjoy hanging out with friends in this game. I think it’s these minigames like QUB3D that added to the depth and variety of the game. EFLC is pretty good too! With added vehicles, weapons, and connected stories. The game feels pretty complete and fun to play!

V & Online:
I have to be honest, I had many expectations of what the online could become. I used to be an active player of both SP and online. Character switching during missions was a creative mechanic of the game. Despite many critiqued the game being too short story-wise, I think the game offers many distraction and minigames for all kinds of players, like off-road racing and hunting.

Online, on the other hand, I used to be an active player of it after its launch on PS4. I logged on and checked out every new single content that each update introduced. I can even admit with shame that I once purchased the expansive shark card MTX just to buy one single supercar. Man, maybe I was at fault of helping R* turning the game into its current state. The game actually still has plenty of contents, but my aging PS4 Slim couldn’t quite handle it well, so I no longer play it. Still though, I keep tracking news and announcement about the series.

III & SA:
I only returned to 3D era once I wanted to try something new (to me personally), so I tried out the classic. I like III a lot. It reminded me of IV plenty, and that’s not just about being both set in fictional NYC. The game is pretty basic, there’s no fancy stuff they added for SA like jetpack or casino. But I like it for its contemporary setting of LC and the dark toned story.

I then got SA with Rockstar Launcher giving the game away for free. I never finished the game, but the most things I learned about the game was from YT, either in forms of YTP memes or speedrunning techniques. Maybe I will return to play it sometimes. Of course being a RSL edition I have to bear with deleted songs, but I think it’s still a better deal than the recent DE.

I loved GTA1 and 2, i played it a lot together with my best buddy from school - like really together, on one keyboard, one would walk and the other shoot and change weapons and stuff

I remember when my buddy showed me GTA 3 in a Games Magazine, i was really pissed that it changed the style of gameplay

So i ignored the Game completely until about a year after Vice City released. I’ve played 3 once or so and ignored San Andreas because i didn’t liked the setting.

I’ve bought 4 but the controls, especially the driving, were terrible, so I’ve never played it through.

V was pretty good, but i thought it would have been a better experience if you just could choose one Character and stick with him til the end.

All in all this series has its ups and downs, i wont buy the Trilogy or any re-releases - maybe if we can get 1+2 in an HD version i would buy that.

EDIT: I’ve never played GTA London, i simply didn’t knew anyone who had the game

I remember playing GTA 1 and 2 around the time that those were offered for free by R* but since I was too young and not a proper GAMER, I didn’t put too much effort into learning the ropes to play them properly. I remember the fart button though

So can we ask when people think the new one might be coming out?

Why should they make a new when they can still milk V? I’ve once read it’s the single most sold piece of entertainment, or was, at one point?

As long there is new hardware being made, there will be new versions of V and Skyrim.

Fuckin Fans can fix this shit themselves!

EDIT: its beyond me how a company like Bethesda is still around. People give IO shit for Absolution to this day, despite it was a solid working game

Seriously though, yea GTA V made over 6 billion dollars. COD as a franchise has made more than GTA but for a single entry nothing is even close.

Well if the recent rumours are anything to go by, probably not anytime soon…

(but if they gave me RDR1 for the PC in the meantime, the waiting would be a whole lot easier 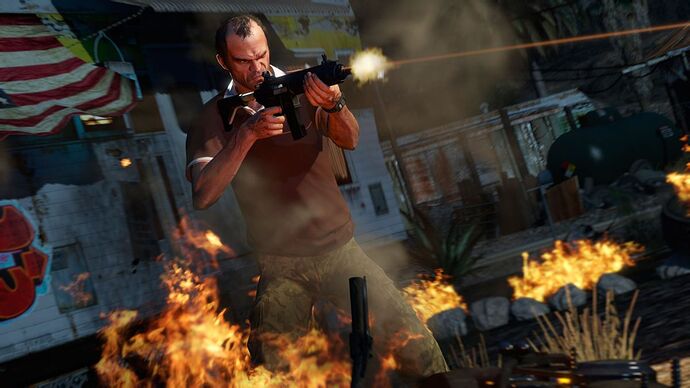 GTA 6 "is Rockstar's most chaotic project since its creation" according to...

So, about that one big feature I’ve been hearing people praising the Definitive Edition outside of graphics, the weapon wheel. Pssst… 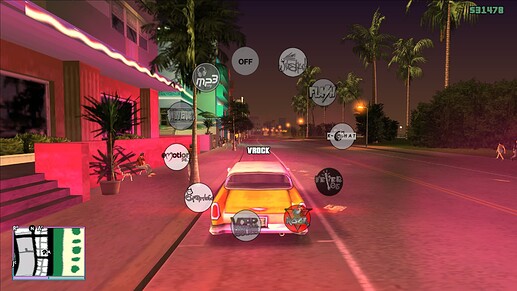 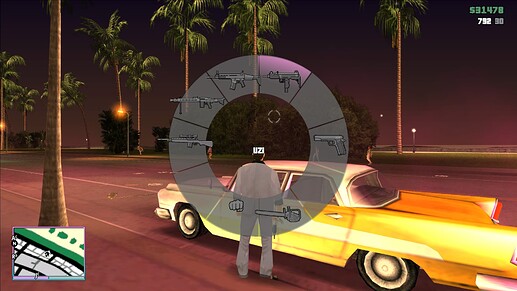 Does the anniversary Version also have the same bugs the original had?

All of them and then some

Yea I heard it will be a while. I hope it’s good when it arrives. Like really good.

For those that are playing the Definitive Edition of San Andreas, modders have you covered when it comes to the awful rain effect I stick with the III era, with the exception of IV because it’s interesting enough, but I can’t join in on any others after that. I have so many games, so many franchises, many of them still not complete, I’ll never find the time to play any more in the GTA franchise unless I literally become wealthy enough in a short period to never need to work again and spend the rest of my time playing.

Having said that, I still have never finished San Andreas or Liberty City Stories, but I have finished III and Vice City (with cheats), and Vice City Stories (without cheats), and definitely love the VC games the most; I love that location. I still can’t quite decide if I prefer VC or VCS more, but currently leaning more toward VCS.

I still maintain, no matter what RockStar says, that Vic from VCS is NOT the brother of Lance’s who was shot and killed at the beginning of VC. Never mind not sounding like him, he doesn’t look or act like him, and the way VCS ends makes it supremely unlikely that he would turn around and re-enter the drug business with a new personality in only 2 years. Maybe they started out intending it to be Vic when they began making VCS, but by the time they actually did it, it is no longer about what they intended. The brother who died was Pete, and that’s the end of it.

As for the new “Definitive” Edition, I’ll stick to the originals, much like the first two Arkham games, thank you. How hard is it to make something high-def without completely redoing it? Don’t bother if you can’t achieve that.