This Holiday Season: What have you received/given away?

Christmas is upon us, or whatever tradition you may follow (or if you don’t follow any at all!)

This time of year, people give gifts to others and receive some in return.
What did you give to someone this holiday season, and what have you received in turn?

My family and I will be moving on to the unwrapping later this morning, but for me, this year I’ve given out donations on behalf of my family members and will give my sister a Supernatural-inspired (the TV show) cookbook.

It’s been a most profitable Christmas

I got four 4K Blu-rays, Bladerunner, The Shining, The Lost World and Joker.

Two bottles of booze, one Whisky and one Cognac/Brandy.

A t-shirt with the JP logo in Japanese and t-shirt.

1.5 Kg of Raisins ( still don’t quite understand why)

The Danish version of Cards against humanity.
And last but not least a gift card for H&M. 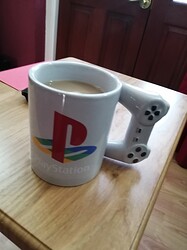 This cup is much bigger than it looks

Christmas for me this year is alone. As depressing as it sounds this is the way. I’ll be having a small gathering next week with my parents and siblings, but that’s it. Tomorrow I’ll be doing something with a friends and New Years Eve I’ll probably make dinner and have 3 friends over who have been good little social distancers.

As for today, I’ll surely be playing a lot of video games.

Sort of a holiday and New Years resolution. I decided to sign up to become a blood donor. Got some material things which are great too.

I received a new mouse pad, some PC cleaning supplies, some cute socks, honey, tobacco, tongs and several other small stuff which I’m all happy with.

I gave some incense to my mom, a good lighter to my dad, wool socks for my sister, candy for my niece and a couple of angel figurines to my grandmothers.

I gotta say, it was a really good Christmas, had some sushi on Eve and some steak today which were all delicious. It’s been great.

Sort of a holiday and New Years resolution. I decided to sign up to become a blood donor. Got some material things which are great too.

I tried to become a blood donor years ago but they couldn’t find a vein in either of my arms. When I had to go to hospital earlier this year, they ended up having to take the blood from my right hand. Hoping when I get older the veins in my arms will become easier to access. It’s great that you’ve decided to become one.

Anyway, on topic. What I ended up giving people:
Imgur Secret Santa: Captain America socks, World’s Smallest Toolbox, The Killing Joke book, Star Trek DS9: The Never Ending Sacrifice book, Richard Osman’s House of Games book, Infinity Guantlet: A Love Letter Game.
Dad: AC/DC’s new album, Thornton’s chocolate Santa. I usually got Dad at least 4 different DVDs for Christmas but he insisited I only bought him the new album. I’m going to buy him the Star Trek: Picard DVD as soon as it comes out in January though.
Dad’s partner: 3 boxes of Thornton’s.
Friend #1: £50 donation to Edinburgh’s Dog and Cat Home.
Friend #2: DVD of The Wizard of Oz and Bill and Ted’s Excellent Adventure.
Friend #3: Bottle of Edinburgh Gin.
Uncle: Alice in Wonderland postcards and a DVD of The Lighthouse.
Cousin: PS4 copy of the Final Fantasy VII Remake.

What I got:
Imgur Secret Santa: 8 fancy tea bags, a few chocolates, James Bond piano music sheets, Sapiens: A Graphic History book, Love Letter game.
£20 Amazon gift card
£20 in cash (from a friend who I agreed not to exchange presents with, but then hides this in her card, so I feel slightly annoyed since I didn’t get her anything.)
Joe 90 Blu-Ray
Fireball XL5 DVD
2 new t-shirts
Some Kind of Hero book
Essential Status Quo CD
Rock and Roll compilation CD
The Wonderful 101 Remastered Switch game

This year was a good, fine Christmas.

Ah, there’s also a mystery gift from my sister that isn’t arriving until Monday. No clue what it is.

First, around 5 days ago I got the dlcs for Hitman 2 for PS4. I’ve been waiting for a discount since the original price in the local PS store was too much compared to that of the game itself.
Just today, I also got all the old games for PC. And I’m gonna be picking up H3 Deluxe when it comes out as well. Overall, I’m really glad to be excited about playing games again since I took a few breaks this and last year, so I haven’t played at all since the last week(-end? not sure) of August and before that since around April and before that since the previous summer, I think. That’s also the reason I decided to come back to the forum and I might not stay long after the H3 release because I have a difficult semester coming but who knows

So I won’t be going to my parents to celebrate a late Christmas. With that being said my Dad and Sister came down to collect their gifts. I’ll rip the bandaid off quick, I didn’t really get anything for Christmas. I’m not upset by it. I did give a lot this Christmas which at its core is what matters.

My cousins who are really young for context sake I’m 20 and they are not even double digits. I got them stuff they wanted.

I gave my Grandmother who I look after a new Keurig Coffee maker since she needed a new one. I ended up giving that to her early.

My Twin Sister all she wanted was a blanket without the felt on the inside. While it was a task to get I did fine one like that.

My Father got a Xbox Series X, it would of been in preorder purgatory, but I paid it off for him, he got it early when I picked up mine.

My Brother, I’ve been keeping his phone on for him.

My extended family got cards with gift cards in them for places like Hardware Stores and Target. It’s simple and they can use it on what ever.

I got my wife a pair of Italian leather gloves. They are gun holster tan in colour and man! are they sharp looking. They are super soft too. She gets an expensive addition to her jewellery collection each year, but this year I could have skipped it bc she loved the gloves so much. I got her some other stuff too but nothing note worthy.

For my father (who is the hardest person to shop for on the planet; he doesn’t like anything and if he does like something he already has it and/or I can not afford it) I got a piece of furniture for his new house in Florida. He picked it out. I finally broke down and let him tell me what he wanted bc between birthdays and Christmas I’m 2 for 36 with surprises. He gets a golf course gift certificate each year on father day bc I can’t handle being 0/3 every year

. Maybe I am even even only 1/36 bc one year I told my sister that I finally thought I had a good gift for Dad and I know she let it slip that I was excited, so he could have been pretending to like it. Anyway he likes it so that’s good.

I got my sister a weighted blanket that she had been talking about and my wife picked out some other stuff for her but I didn’t pay attention to what it was.

Mom didn’t want anything this year, which is out of character for her. I knew she needed a new printer/scanner though so that’s what she got.

I got some good stuff in return (especially from the wife who did a fantastic job picking gifts this year) but the best part of the holidays is the giving part.