To all Splinter Cell fans here on this forum, we need your help

Hello everyone.
I know some of you Hitman fans also are Splinter Cell fans, I myself am a long-time fan of these two franchises.
With the help of other Splinter Cell fans from the official Ubisoft forums, we wrote an open letter about the future of the franchise and we are now seeking for a maximum support from as many Splinter Cell fans as possible before sending it to Ubisoft.

If you’d like to support a return to form with strong emphasis on stealth and the idea of creating a positive and constructive collaboration between Ubisoft and us (like IO Interactive did with Hitman in 2016), come over to SC subreddit and drop a comment so we can add your username to the list of supporters. Or post your username here on this thread and we’ll add it.

Here’s the reddit post talking about it in more detail, you’ll find the link to read the full letter: 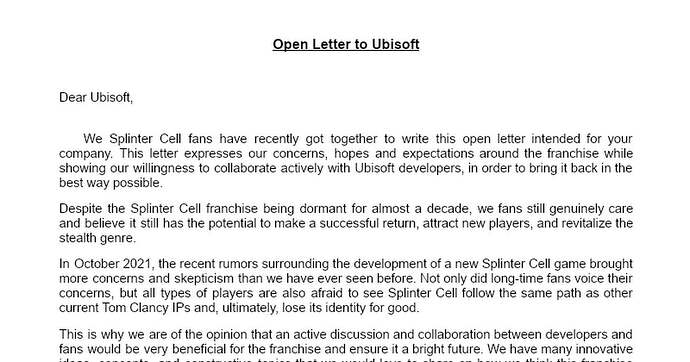 And if you know any people who is a Splinter Cell fan and would support this letter then please send them the link and ask them to send their usernames.
Thank you all

But I don’t trust Ubisoft as far as I can fucking throw them to make a new one.

Have you played Breakpoint? 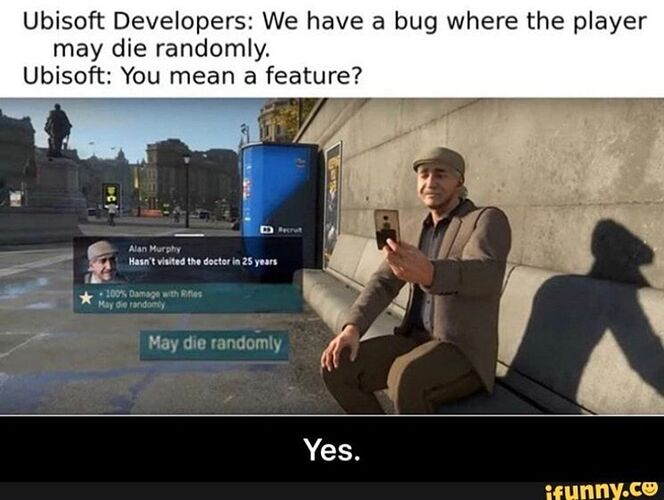 Yeah I don’t trust Ubisoft as well. They keep making those same boring games with no originality for years now. Hopefully they will wake up and see the amazing potential of their franchises and stop with these open-world and F2P trends.

No I didn’t play Breakpoint. I know the game has been updated a lot since its release and praised by many players now. But I’ve seen videos of it and it doesn’t look interesting to me.

As pointed in the letter, I prefer slow-paced methodical experiences with a strong emphasis on realism when it comes to Tom Clancy stealth and tactical games.

I wish I could get another SC game in my lifetime but I’ve settled on Blacklist being the last one and I’m okay with that.

I’d rather that than a butchered version that’ll scar the legacy.

Yeah. I didn’t like Conviction and Blacklist that much as Splinter Cell games but they’re still good games.
Ubisoft of today would be able to release a terrible game but paradoxically they still have a lot of talented people in their studios, with some of them who worked on Chaos Theory. They just need to give more creative freedom to their teams and to give Splinter Cell to devs who love and understand what stealth is about.

By the way you want me to sign you in the letter ? Or maybe you already did it through Reddit ?

Thanks for bringing this to my attention.
I will read the letter and respond in the reddit thread.

You’re welcome. Thanks for taking the time to read the letter.

Read and signed (kindly confirm if I´m indeed there). Thanks for taking the initiative on this, although I´m not sure how open will Ubi be to the proposal…

Even if the next game is “only” a remake of SC1, I hope it will stay true to the original and be successful enough to pave the way to an actual new game. And if that happens, my greatest hope would be for them to retcon the last three games and pick up after CT with the main characters (Sam + Grim) actually behaving like themselves and Lambert alive and kicking and a good (geo)political/spy thriller story to boot.

Thank you very much for signing the letter and for your kind words. We are aware of the fact that Ubisoft will probably not care and not listen to us, but at least we will try. We have to make our voice heard, it’s now or never. And hopefully Ubisoft will understand that it’s a great opportunity for them to restore their image and finally get back on making great games.

And as you read in the letter, we also hope for the series to go back to its roots, in terms of gameplay and in terms of story with that realistic techno-thriller aspect. I completely agree with your point of view because I think this is where the series has the greatest untapped potential.

Let’s hope for the best, I will keep this thread updated if we get an answer from Ubisoft.

I sent the open letter in the course of last week and Chris Auty , who is the creative director of the remake at Ubisoft Toronto, kindly replied to my message. Here’s his reply (he authorized me to post his reply on the forums):

It is completely understandable that they still need time to focus on the team first before considering what we fans have to say and expect, but at least now we know for sure that they have read the letter. Hopefully they will decide to turn towards us early in the development process and create a real productive collaboration that would go way further and way deeper than assigning us a community developer. Let’s remain cautious but reading his words, it seems that they’re taking this remake seriously and really care about what the community is saying.

Now all we have to do is wait…

I’ve been lurking this thread for a good while (including the reddit threads and within the subreddit), and for the first time I am surprised at the collaborative effort you’re putting through. It’s not much, but there’s something so zen about pushing through an arduous attempt at a response that developers are otherwise somewhat quiet at this sort of thing. And I don’t usually like to sign petitions myself as I personally think they end up being a waste of time, but the end goal being fulfilled was unexpected of me.

Thanks for keeping the torchlight open and posting updates about the open letter.

As I said on reddit, I was lucky to be able to reach out to the creative director, he seems to be an open and chill guy. I really hope this is the starting point of a good collaboration between them and us and one of the sources that will bring a positive revival for the franchise.

However the end goal is not completely fulfilled yet, the road is still long and we’ll see if they keep their words. But be assured that I’ll make my best to remind them that we want our voice to be heard ^^

You’re welcome, thank you for your kind words and your support