Minor actor spoiler: Robert Englund, famous for being Freddy Krueger has a starring role in this Season too you’ll see later, so the homage goes on multiple layers.

I got half way through the last season of Peaky Blinders. It’s still good. I’m excited to see how they wrap it all up. My only complaint in Season 6 is that they should have just called the Joe Kennedy fill in “Joe Kennedy,” but whatever.

Vecna is Freddy but mixed with Voldemort. Two of my childhood fears combined lol.

I’m having a blast with Ms. Marvel so far and I got to say that the trailer did not do the show any favors. While it’s generally pretty lighthearted, and may skew a bit younger, it’s nowhere near as childish and juvenile as seemingly advertised. The way it’s shot and framed reminds me a lot of the comics, particularly its use of the background. I wasn’t sure about its explanation for the source of her powers (even though I understand why it needed to be changed) but the second episode alleviated some of that apprehension. Also, some scenes (like one involving a drastically scaled up Mjölnir and another depicting a possibly “too soon?” Endgame Black Widow homage) that were so unexpected and/or well executed that they were genuinely hilarious. Last but not least, Iman Vellani is fantastic in the title role; the whole cast is great and each brings something different to the table but Vellani has to play up quite a few over the top, farcical scenes while maintaining believability and she toes the line every time. I look forward to her future in the MCU.

All in all, this is a relatively easygoing and optimistic (not everything needs to be doom and gloom, especially these days) look at a young woman growing up Muslim* in America who also happens to have superpowers. I have absolutely no idea why the trailer came across as so immature but I think this meme my sister found perfectly sums up the show proper: 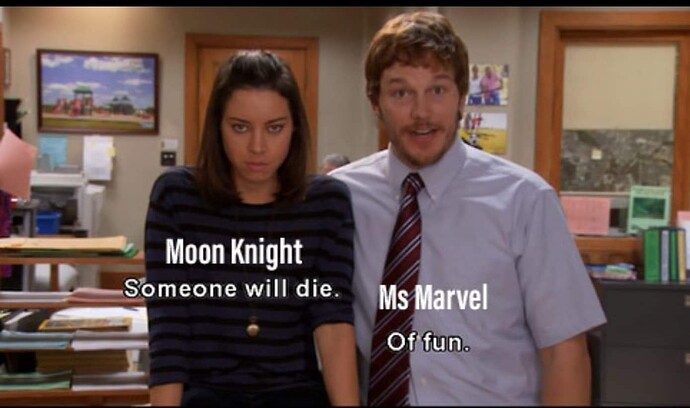 *NOTE: I, as a white male, do not feel qualified to comment on the accuracy or authenticity of the experiences of the female main character or the depictions of her minority culture. I’ll leave that to the experts on social media.

Just finished what’s been released so far for Stranger Things 4, and I gotta say, I guessed the big twist a full episode ahead of the end. My wife listened, thought I was onto something, asked her sister who has seen it all if I was right, and she said no. Turns out she just didn’t want the surprise ruined for us and lied; I was directly on the money across the board. I guessed all about the identity of the orderly who helped Eleven; who he was then, who he had been, who he became, and all the reasons why. Didn’t take away from the shock, however, of seeing my exact prediction play out precisely as if I had written the episode. Can’t wait for the rest.

As for what I’d say is a major con this season: returning characters given very little context.

I get this show was written and filmed in the middle of/tail-end of a serious pandemic. However it feels like a few integral plot points this time around needed specific knowledge of who previous characters were – problem is, for us Real Life People, it’s been over 3 years since the last season came out, even more than the first one, too.

Much of the tension this season comes from Fuches digging up Barry’s old hits and turning his victims against him. But a lot of those victims and victims’ names feel lost on me, which I only received context for afterwards in discussion threads or episode recaps.
Now, maybe each episode has a recap beforehand that clears things up, in that case it’s my fault, because the method I’m watching these with, doesn’t have one.

But I guess that’s a good case to rewatch Seasons 1&2 again, which is nice – I just hope they can maybe give a bit more context in the future to account for such a long time off the air.

And I Started Ms. Marvel today.

It’s a nice first episode. I’m not very familiar with the character, but I think Iman Vellani plays an Avengers super-fan Kamala Khan very well, probably because she literally is one.
A lot of scenes feel very natural and realistic in dialogue, I think partly because the actors aren’t articulating all the time? Maybe it’s my TV sound setup, but I found some words or sentences in conversations to be very quiet. Bit strange but I think it added a nice touch to a grounded story so far.

The show is fun and cute as a young-adult coming-of-age series. Something about the trailers made it feel a bit childish, but here it feels more teen-oriented, struggling with issues of future planning, expectations, rebellious teen nature, stuff like that.
There’s lots of style too in its artsy, paper-cut, presentation of Kamala’s creative, day-dreamy brain. The visual effects team are doing a great job. Feels very Scott-Pilgrim like, too, with the added unique cinematography and editing. This one shot following Kamala as she lies in bed, but the camera flips all the way around too was neat.
The nonchalance of untranslated Urdu language peppered in the script is a unique touch I feel. I don’t understand it, but I can sort of get it through context clues which is nice.

I really like the end-credits sequence too. Most of the other series has been “CGI Showcase Reel #25” for each character. But this one is a nice “Real New Jersey with CGI Avengers Graffiti”. Got some really good music too.
There’s also a mid-credits scene at the end of EP1. That’s new for a Marvel Series. They always hold those till the last episode.

I think the trailer did the show dirty; it’s like it was advertising something completely different.

And I love the visual effects! They remind me of how the comics used the backgrounds of many panels (particularly in earlier issues).

I’ve been meaning to start Barry; kudos on finishing season 3 (I was only vaguely aware there were 2…

But! Speaking of finishing things: the Obi-Wan Kenobi finale was great. The show itself was good* but the last two episodes took it to another level. You’ve got some (minor) contrivances but from restoring canon to epic fights to satisfying
resolutions to fun cameos, Parts V and VI had a little of everything.

Random notes: Ian McDiarmid is low key the MVP of Star Wars, I was genuinely concerned Reva was going to lose to Owen and Beru, Liam Neeson is a such a troll

, Vader and Obi-Wan’s last encounter was emotional and incredible, Ewan McGregor brings so much to the role, and the set up is there for a second season but assuming that’s the ending it’s pretty perfect (leaving the future (where Leia remembers Obi-Wan successfully helping her, Ewan McGregor becomes Alec Guinness, and Luke vaguely recalls that one time a crazy hermit gave him a toy) implied).

So, as another step into ever evolving weeb spiral (don’t tell @MrOchoa) I’ve been watching Black Butler which uh, is A Lot To Unpack, thanks to the sheer number of grown men who really want this boy’s hole soul but it’s weirdly compelling too? Like, yeah there’s a lot going on with the grown ups but the servants are there as comedy relief and he has a super loyal Indian friend and his demon butler who geniuinely seem to care about him for reasons yet to be revealed. It’s cute and I’ve heard it makes puritans really upset so I’m in man

Watched the first couple episodes of Gods Favourite Idiot with Melissa McCarthy and her husband (whatever his name is). The first episode was absolutely hysterical and the next one was funny and then they just fall off a cliff.

First two were funny enough that I would say watch it and quit it even though you’ll never know what happens in the end. We stopped after episode 4 and we’re totally fine not knowing what happens.

Even if you watch the rest, you still won’t know what happens at the end…

When I start a TV series or movie and can’t finish it, because it’s trash, I read up on it to see how it ends. I can’t just outright drop something, even if it’s complete garbage, and NOT know how it ends.

The only way I can not finish a series is if I didn’t want to see it in the first place, and didn’t like anything I saw when I started anyway.

So far, the only one to meet this standard is The Office. I only started watching it because people said I reminded them of Dwight and I wanted to see if it was true, I wasn’t really interested in watching for it’s own sake, and the character of Michael Scott was just so infuriating that I had to stop a few episodes before the end of the first season. Just couldn’t take it.

Anything else, even if I didn’t want to see it, but I ended up likening it, and then stopped liking it if it turned bad, I still have to follow through to the end.

I’m like that for like a day or two, but if I hold off then I find it’s easier to brain dump the entire experience from my memory. Also this only applies to dramatic stuff. Funny stuff I don’t remember what happens even if I love it. For example I have seen Ricky Bobby at least 3 times and I have no idea who wins the final race of the movie. I just remember they crash and get out of the cars and run to the finish line

I had to stop a few episodes before the end of the first season.

Mid-season 2 to mid-season 6 are among the best comedy I have ever watched but season 1 is so bad (and offensive even for the early 2000s) that I genuinely don’t know how it got renewed.

yeah @Heisenberg I respect your opinion and all, so I’m ok with you stopping there.

…It’s just that the show really starts to find its stride and style in Season 2 & onwards. Season 1 borrowed a lot of its jokes (word-for-word even) from its UK counterpart. A comedy style that’s more offensive, awkward, sexual? than USA sensibilities.
So I agree with @Krikkit2021 that Season 1 isn’t a very good impression on the show as a whole.

Personally I sort-of enjoyed season 1 despite its off-putting nature, since it was interesting enough to see how closely they adapted the events/jokes of the UK series.

I’ve heard it gets better, and I think I will go back someday, but I’ll have to summon up the stomach acid to get through season 1 and right now that’s not a priority for me.

To be fair, everybody was right: I am like Dwight.

Oh, and I misspoke earlier: The Office is not the only show I started and stopped, having not wanted to see it anyway and not liking what I did see. The other one to hold that honor is Game of Thrones. I watched the first episode and noped the fuck out. When the very first episode of a series shows a brother and sister fucking each other… yeah, I’ll stick to all the murder and attempted rape of The Walking Dead, thank you very much. Incest is a step too far, for me.

To be fair, everybody was right: I am like Dwight 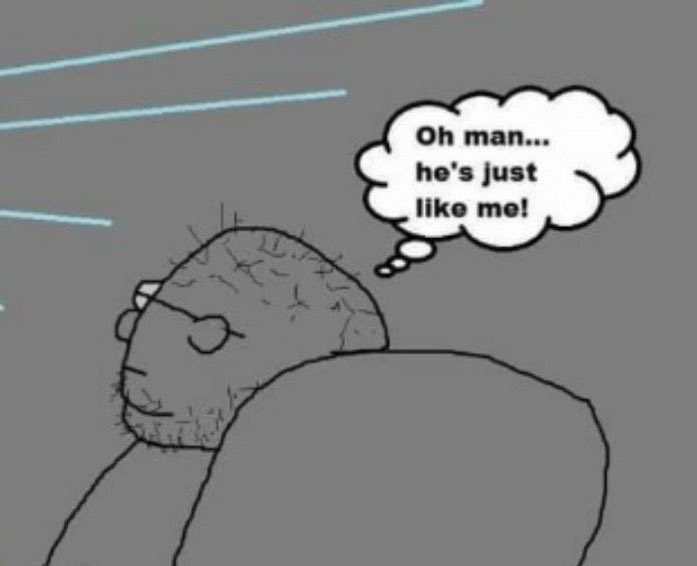 I watched part of one single episode of that show and wrote off the entire series. I haven’t regretted it either. I regularly drop shows after having seen only one or two episodes.