IOInteractive just released an update saying that PC users will not need to repurchase Hitman 1 or Hitman 2 if they’ve already bought them. They are working on a solution to import the locations from H1/H2 into Hitman 3.

On PC, we are continuing to work on a solution with our partners to allow PC players who own HITMAN 1 or HITMAN 2 to import locations from those games into HITMAN 3 at no
additional cost.

Until we roll that out in the coming weeks, the HITMAN 1 GOTY Access Pass will be free to own for all PC players who pre-purchase or purchase HITMAN 3 in the first 10 days after release. 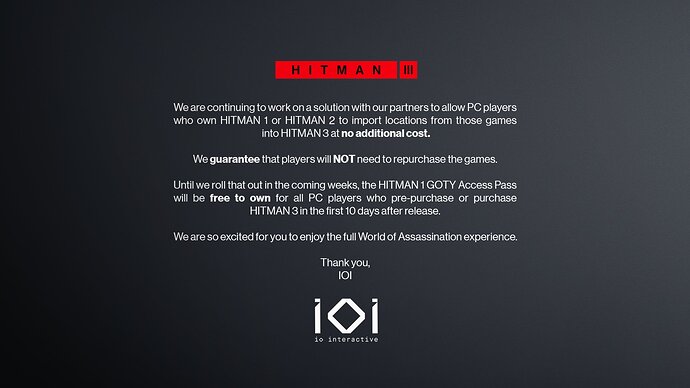 it was a wild 24h ride with you guys thank you

Its good they are doing that. But still don’t like the idea of waiting a few weeks. Given I do want to do a complete campaign run. Still least being looked at.

Wonder if they will be try do the check on Mastery Tracks from players who are importing progress. I.E Isle of Sgail got a few unlocks bought Hitman 2. Got unlocks in the DLC bought the gold edition/expansion pass? Just a guess

I’m so so happy to hear this.

That’s good for IOI to finally adress this bad situation at 3 days of the launch. However i’m afraid that the damage has been done already, as lots of people refunded their preorder from EGS

That’s too bad tho that PC players get neglected so much in those new HITMAN games, almost considered as second-zone customers

However still looking forward for the Steam release in 2022.

You should still be able to do your H2 progress transfer straight away at launch, although the H2 levels themselves won’t be available in H3 for a couple of weeks while IOI liaise with Epic/Steam et al. 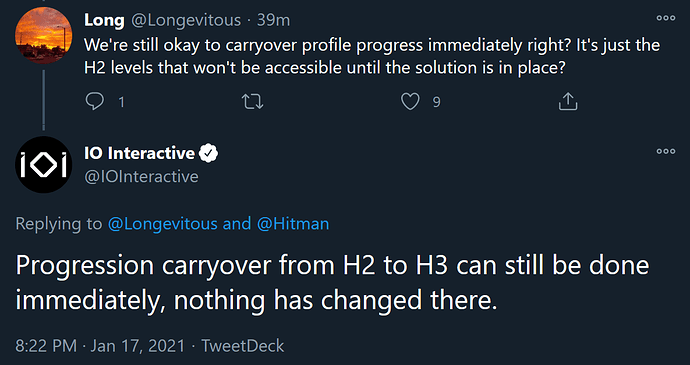 How to force companies:

It was a rough journey but we finally did it boys. Its certainly better to wait for a solution rather than rebuying as we’ll be playing the heck out of H3 while they find a solution anyways.

Smh… Travis knew I was asking about this months ago. I tagged him at least twice about this.

So NOW it is escalated to a plan of action. Geez.

Why corporations (including the one I work in) routinely walk right off the cliff for things I pointed out is beyond my understanding. Hahaha.

In fact if both Passes were free (or released versions of H1 and H2 were free) as part of the original H3 launch we wouldn’t have this problem.

Yeah but now you get to say: “Thanks IOI. I can wait for your solution. In the meantime, you can also wait for my purchase. We’ll have an exchange when you’re ready.”

Thanks IOI. I can wait for your solution. In the meantime, you can also wait for my purchase. We’ll have an exchange when you’re ready.

Honestly if it were Epic saying “we guarantee players will not need to repurchase the games” then I wouldn’t believe or trust them. But this is IO, who I like enough to give the benefit of the doubt to.

Sounds good, but at the risk of sounding nitpicky or greedy, I hope we won’t have to do the data transfer to get Hitman 2 for free on Epic. Hopefully just tying it to the IOI account should be enough to prove that I own Hitman 2.

Wonder what will happen to players who still only own the Silver edition of Hitman 2? Apparently in the old post, they were only going to do Hitman 2 Access Pass and a Hitman 2 Gold Access Pass. Will Silver edition players basically get a free upgrade to Gold in the process? I’m not Silver for the record, but just a curious thought.

In fact if both Passes were free (or released versions of H1 and H2 were free) as part of the original H3 launch we wouldn’t have this problem.

There still would be the issue of players buying Hitman 3 after the offer expires, despite owning the previous games on Steam. Besides IOI and Epic would lose potential H2 money from newcomers to the trilogy.
The current time-limited deals are fine as long as game transfer is possible. I personally don’t want to be given away something I’ve already bought.

So it looks like there is full item transfer and full transfer of Hitman 1 levels. And Hitman 2 will come “in the coming weeks.” Not the end of the world but they really threw a curveball here.

Well if there was a way to negotiate a “forever” arrangement… The simple solution is that the H1 and H2 Access Passes become a non-exclusive release : So they launch also on STEAM - tomorrow.

Because Access Pass process works “in-game”. You should be able to download and activate STEAM H1 and H2 Access Passes after buying H3 from Epic Games Store.

STEAM will of course honor your previous H1 and H2 purchase if you have them so your Access Passes become free.

By letter of the deal, HITMAN 3 can remain 1 year exclusive on Epic for the meantime.

Well, this is all cute and everything, but if the solution involves tying my Steam and EGS accounts, then I´m probbaly not doing it. And there´s still no info on future H3 (EGS) to H3 (Steam) progress transfer, so until we hear about that, I ain´t transferring my progress either

Yeah but if H1 and H2 Access Passes launch on STEAM immediately, the only place where your data would merge would be within HITMAN 3 and IOI servers.

That said, I think if IOI went to STEAM today to negotiate the release of the Access Passes on STEAM (but not HITMAN 3), Valve would interpret that as: “You just want us to help Epic sell H3 and put out this fire you started.”

This probably would mean IOI need to shell out some money to Valve as “compensation for H3 sales lost ‘forever’ by launching the Access Passes on STEAM”. That would be IOI’s loss to absorb.

Epic will have none of it. Or technically IOI would have to give up some of what it gained from Epic’s deal to Valve.

Money in, money out. Ironically this would be easier if Access Pass was negotiated with Valve at an earlier time (since IOI could have negotiated with Epic for X$ it will keep +Y$ it knows it will wave as candy for Steam to release only the Access Passes) whereas today they would be doing it now against the backdrop of HITMAN Steam owners rioting around IOI and Epic having already finished negotiations long ago.