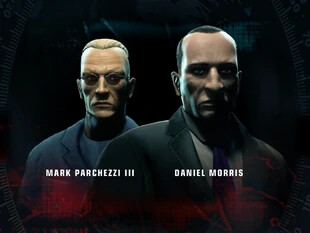 Briefing:
Listen up, 47. The President of the United States is about to be assassinated. You’d expect the CIA, FBI, or Secret Service to prevent the assassination, but we can’t rely on them. We can’t rely on them because the man behind the assassination is the acting Vice-President. The same shadowy group that had him appointed to the Vice-Presidency wants to put him into the Oval Office. They’ve got pull at every domestic agency.

The assassins are probably already in position, in the White House. Unless you can stop them, the President will almost certainly be assassinated as soon as he returns from Los Angeles. Your target is the notorious assassin Mark Parchezzi III and the Vice-President himself.

I love non-political games like this one where you break into the white house and kill the vice president.

That’s the First Lady not his wife.

I love the rain in this mission. The only BM mission with rain and it executes it very well. It’s so calming watching the rain pooring from the windows while in the dark corridor.

I hate this Mission with a Passion, the Bureau Part of the White House is annoying, i dont like the Marines walking so slowly and dont get me started on the Confrontation with the Albino, that was a bigger disappointment than the entirety of Absolution.

Loved putting the explosives in the women’s briefcase and then getting caught at the metal detector machine.

Well lemme nerd it up, the guards are perorming a type of ceremony called the changing pf the guard that usally royal guardsmen do. but yeah i agree that teh burea of the white house is way to big.

A ton of Easter eggs and hidden stuff in the level. Loved trying to lob my briefcase over the fence near the coach stop… and throwing it over the detector

Is there a sausage anywhere on this level? Would like to kill that stupied dog using poison.

How is it that Hitman Blood Money wasn’t recalled to remove this particular mission in response to January 6th?

Now that the dust has settled, how did they get away with this? I can’t imagine any game doing this today.

… Because hitman blood money was released 16 years ago. This is a ridiculous question

Because back then game devs had balls