We need an artbook of the WoA

Before anything, look at this. 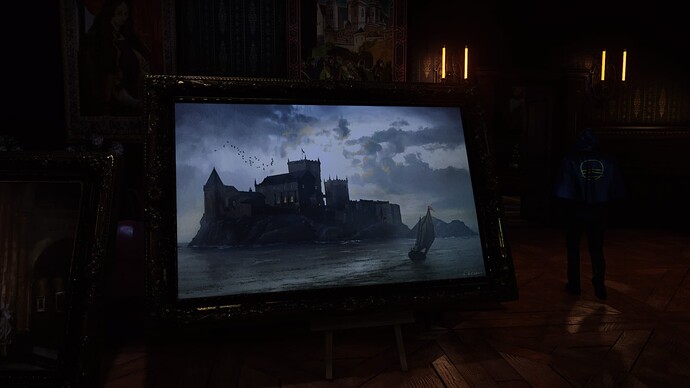 This artwork looks incredible. We all know what and where this painting is located. But i’d like to know more of how the developers came up with it. It’s a big stretch of course but the love is palpable.

I am in awe of how refined the details in the game are. From fake logos* (i think they’re called fogo?), multiple designs, rendition of preexisting paintings, to fake artworks, posters, pamphlets etc. within the game, all of them make the game so good.
But there is the bigger picture of course: the character and level designs, the cinematic qualities, soundtrack. I cannot imagine the work behind all this, how it comes from scraps of papers, sketches, computer-engineered tryouts, patterns, research for historical and visual accuracies and how they built it up video game wise.

IOI delivered two artbooks as far as i know: a condensed red-covered book for the release of H1 and a digital artbook for H3.I currently don’t own the H1 collector. As a book lover, a physical release of an artbook allows me to enjoy beautiful pages of visuals, essays, descriptions (why not dream of a character book?!). It gives a vision of the work behind the World of Assassination, granted it’s not possible to put everything in it

. But it would represent a great gift to us fans.
I’m aware it has a cost to produce a book of this sort but the tendency for collectibles make me ask: is it possible to print such providential artifact (pun intended)? What do you think?

I like ALL the dark, almost horror-like paintings in Alma’s beach house in Hawke’s Bay and Athena’s office in NY. Reminds me of the painting of Pyramid Head in Silent Hill 2, style wise.

I could be wrong, but maybe the reason (or A reason) they haven"t put out something more robust is because almost all the artists at ioi have Artstation pages (plus other sites) with A LOT of concept art, level designs, lighting, etc.

With so much free art available they might think it would be hard to charge for it. Just a guess, who knows!?

I’ve discovered Simon Lindwall’s page recently and while i’m definitely more into drawing than digital, there is something about his style that i like a lot. I had no idea you could find much more on Artstation.
I’m aware it could be handy to produce an official artbook mainly because of the adventurous development of the games - another reason to hate copyright ownership. But i still think something can be done even if it’s obvious that artists have the right to display their portfolios online.

I’ll go check on Reynard’s art collection, i see it but don’t visualise it. Connections between the locations are cool to do: Dawood Rangan’s paintings very similar to Tyson Williams’s.
I’m obsessed with the painting of Castle of Sgail though

I am convinced that one day, soon enough, there will be a book release about the Hitman franchise. Every video game franchise got their own, so why not our favourite bold assassin?!