What makes an interesting target?

Just wanted to know what HITMAN Forum thinks of this

For me personally I find targets who are easy to sympathise and relatable as interesting targets. They would challenge the narrative into why 47 is instructed to kill them in the first place. Ultimately they all fall under the relation that they’ve worked with Providence before, but that can be out of the question for ones who are socially connected to us.

Other cases like Athena Savalas can have the opposite effect as most ordinary people can’t relate to corporate evil overlords. That makes us hungry to discover who they are, and hate them even more because of it. That’s also edge case from target to target, and probably why Ken “The Brick” Morgan is a boring target.

In pretty general terms there are three aspects for me:

-Route across the level.
-Interactions with the stage and it’s inhabitants.
-The target’s information: backstory, personality and looks.

I agree with most of your points, great read! (Would have liked if not for the dailylimit) However I disagree with this one:

A unique voice actor/actress is also a must

I personally disagree with this point. IOI can use the same voice actors/actresses as long as their voices are unique from other NPC’S/Targets. Kerry Shale is the voice actor for Ort-Meyer, Pablo Ochoa, Arkadij Jegorov, and Carl Ingram (according to IMDB) yet each of his roles feel unique and memorable. You wouldn’t confuse Ort-Meyer with Pablo Ochoa. So as long as they have a unique voice they do not have to have a different voice actor/actress.

A unique voice actor/actress is also a must

Novikov does one better than this - he has two voice actors.

Wow, I never knew he did all of these! Thanks for letting me know.

There are still some bad examples though, like the Penelope Graves, Ljudmilla Vetrova and Imogen Royce trio. These are 3 of the most bland characters in the trilogy imo, Royce to a lesser extent. The first two are not memorable in the slightest.

I suppose a reused VA can definitely still work, so long as they can bring life to the character, and the writing team give them a chance for life in the first place

Wow, I never knew he did all of these! Thanks for letting me know.

Just goes to show how good he truly is.

There are still some bad examples though, like the Penelope Graves, Ljudmilla Vetrova and Imogen Royce trio.

I very much agree (although I haven’t played Haven yet, so I can’t say anything about Vetrova).

A good question/topic! I might give a more elaborate answer later when I think it through a little, though my opinion is pretty much identical with @SilentWraith ´s (aside from maybe the interesting appearance, which I don´t find all that necessary, and the voice - a unique one helps, but it´s more about the performance).

I just wanted to note:

What should IOI do to avoid another Ken “The Brick” Morgan?

Ken Morgan’s are so boring all I remember is drowning in a toilet and the tuk tuk explosion, both are hardly interesting or unique

It´s interesting how relative our perception of an interesting target is. People will almost always bring up Ken Morgan as a prototype example of a bad target in the trilogy. And yet, his kill opportunities (however bland they are) are still more interesting and his route more manipulable (you can divert him to three different parts of the hotel) than those of Ezra Berg (who just has is A to B and back route no matter what), who is generally considered a more interesting target just because of his look and backstory, and yet I find him equally or even more tedious to deal with than Morgan.

There are still some bad examples though, like the Penelope Graves, Ljudmilla Vetrova and Imogen Royce trio. These are 3 of the most bland characters in the trilogy imo, Royce to a lesser extent. The first two are not memorable in the slightest.

(the VA´s performance is good, don´t get me wrong - she just has one of those voices that make me tick for no reason)
And I think you´re not giving Vetrova enough credit. She´s arguably the most fleshed out of the Haven targets and you learn quite a bit about her (and how to feel about her) when you listen to all her possible dialogues and phone conversations.

A reason to want to kill them! Everyone loves killing Dawood Rangan and Rico Delgado because of their massive ego. Targets like Penelope Graves and Andrea Martinez are extremely shallow in this regard

Same with Martinez. I wouldn´t say she´s extremely shallow. Hearing her chats with the foreman about how they are misleading the locals plus the way she talks to you as the shaman, compared to the praisal she gives after the ritual to placate the workers, just wonderfully show what a bi*ch she is and that cementing her legacy (pun totally intended) in the village is well deserved. One of my favourite bits is how she calls the village San Fortuna instead of Santa Fortuna during the statue unveiling. Although a native Spanish speaker would (probably) never make that kind of mistake, it just shows how little she cares about the village and people living there, not even bothering to get the name right, while boasting the opposite in her PR mode.

But yes, Dawood and Rico are a whole different level.

In my opnion, the Bio of a Target is actually it’s most important thing, even more though than there routine, even though it is still very much important. The famous Ken Morgan lacks both of these Things and even though he played a minor role in Mendoza again, it’s Nothing that couldn’t have been done in another way.

It’s also my favorite Part when desiging my ET Mods. Speaking of those, I’m mostly trying to find balance between “Evil” Targets like Darius Wainwright, a former Sexual Offender, Targets who just do/did something imoral like ‘Mrs. Newland’ who helps Criminals to disapear and even tragic Targets to some extend like Derek Endura, who betrayed his Employer to finance his Cigarette Addiction.

In my opnion, the Bio of a Target is actually it’s most important thing

I would be inclined to agree, but it´s a bit of a double-edged sword… When the bio is interesting, I get hyped about the target, but I need that bio to be somewhat reflected/referenced in the mission itself in the dialogues and target´s behaviour. Hush for example has an extremely interesting bio, but it´s left basically unutilized in the game and his kill opportunities and route are far from exciting.

Q: What makes an interesting target?

A: Must be a gangster and Bollywood producer.

I think this is why I love Mark Faba so much, he ticks all of these boxes perfectly. Its definitely his lore and voice actor tho that makes him so much more iconic than other targets

Q: What makes an interesting target? a great protagonist?

A: Must be a gangster and Bollywood producer.

I think this is why I love Mark Faba so much, he ticks all of these boxes perfectly. Its definitely his lore and voice actor tho that makes him so much more iconic than other targets

And this is why we need him permanently in the game!

Yes, General Zaydan, one of the Hitman franchise’s most iconic targets.

Personally I like targets with shorter loops that can easily lead them to good places for kills, unless they’re Ken Morgan.

I like the Marrakesh targets having short loops through their respective fortresses, but I also like that they can be made to go to very different areas. I like Berlin’s targets for this reason and I love Ezra for this. They’re simple but very exploitable. There isn’t too much down time.

There is something fun about the simplicity of targets living lives on a 2 minute loop between like 2 rooms. If it wasn’t A New Life wouldn’t be the fan favourite it is now.

And this is why we need him permanently in the game!

Yes, that’s for sure and Hush is defenitly an Example on how not to do it, so I’m not a huge Fan of Chongqing’s Targets anyway.

You must be this interesting to enter: 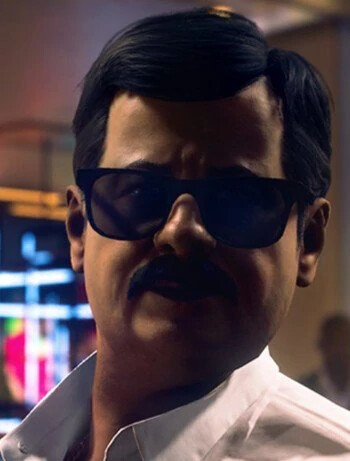