What's the plan for future Elusives?

I started Hitman with '16. I bought in at Sapienza. My first Elusive was the Prince.

I was there across most Elusives. I remember the Marrakesh launch and writing up a big ol’ Reddit post going over the issues with it. Colorado and how people loved it ( at the time ). Hokkaido and how neat it was with it’s no bringing anything in until 20.

The launch of the various DLC, Patient Zero, and the various thank you programs. I got my Outstanding Performance Coin on I think the Fugitive, as I’m pretty sure it was Hokkaido.

By the time 2 dropped, I had all the H1 suits, and the Appraiser got me to 15/5 on Elusive/SA Elusive. I got my Undying/Revolutionary in the bag. And then there was that massive gap from January on where I basically…fell off. I had all the Elusive stuff, I just needed a Mumbai and Whittleton, and by the time they added the Censor I had long since moved on to other stuff.

3 being Epic Exclusive kinda just was the final nail in the coffin, and I put off buying Hitman 3 until a few days ago during this $25 sale. Only to find that the save transfer feature didn’t work, and my save is corrupted forever.

Honestly it’s not the end of the world. I can theoretically get most of that back. I’m actually eager to start fresh on the various levels. But I’m curious what IOI is actually planning to do with Elusives and the prior content going forward. “You had to be there” only holds so much water. You’ve got people who started Hitman 1 on console and now play on PC. People who went from Xbox to Playstation. People like me whose save file was corrupted somewhere on the way. People who never had a chance to get stuff like the Outstanding Coins because the game didn’t come out in their country until after the promotion was done.

I’ve heard on Reddit that IOI plans to release more Elusives. Apparently, a mix of Hitman 1 and 2 Elusives. But how many. For how long. Do they plan to rerelease the Coin/Black Winter Suit? Apparently, Travis was saying he’s looking into getting the Miami suit released in some other fashion then the Undying Elusive since that won’t be coming back. Can we get some words on the rest of this stuff?

I assume I’ll be fine, because I bet they keep doing Elusives to December and probably do a batch of Elusives in December again. I got SA on Bookkeeper and Fugitive, and I’ll probably be fine on Iconoclast. So I’ll be 12 away and 2-3 SAs away from being done. And I guess another Paris/Sapienza ( probably not a problem, there are multiple of both ), Marrakesh/Bangkok ( maybe a problem ), and then a Santa Fortuna, Whittleton Creek, and Sgail from being caught up. And it’s annoying that I have zero idea that I’ll actually be able to accomplish that.

Do they plan to rerelease the Coin/Black Winter Suit?

No, according to Travis’ post, those items will remain exclusive to players who unlocked them and made progression carryover from H2.

I can understand the performance coins and the black winter suit, but I really don’t get not bringing back the Aluminum Travel Briefcase since it’s not an early adopter reward like the others

It was something from those that played H1, then returned for H2 so I would put it in the “early adopter/loyalty reward” category tbh. 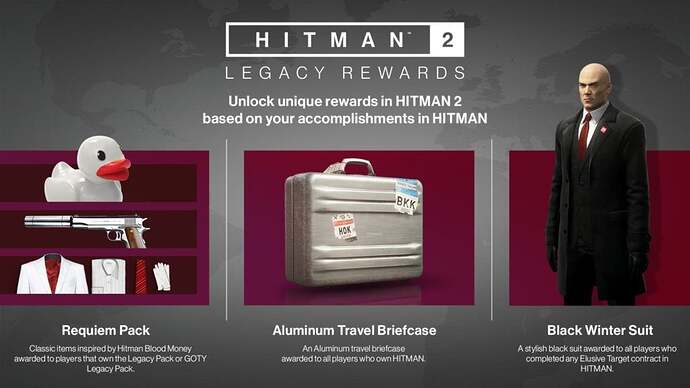 Yeah, but in December 2020 I played Hitman 2016 for all of 10 minutes before switching over to the legacy pack in Hitman 2 and still got the travel briefcase for my “loyalty”. I don’t know if new players can still unlock it, but its timeframe to obtain was much less restrictive than the other rewards. I don’t get why it can’t be awarded in the same manner in Hitman 3, especially since it’s the icon for every Versatile Assassin challenge.

Even though H2016 has been given away for free on various platforms, you still need to own both the game and H2 to unlock the briefcase. So it’s certainly some degree of loyalty. I’d say it’s an additional item that was rewarded in the same fashion of free legacy pack for returning players.

it’s the icon for every Versatile Assassin challenge.

There’s exclusive items shown in many places in the game, like the ICA19 Chrome in the post-Mendoza cutscene. It’s probably just for the UI design sake.

I believe that players who waited for the Steam version to be released and those who purchased the game in the Trilogy have missed the opportunity to play many Elusive targets.
It is good to take care of past users, but I hope that not only players who have already purchased the game, but also those who are going to purchase the game will be given the opportunity to play it and, more importantly, to get the suit.
I also hope that after the final update, the single elite targets that appeared in HITMAN (2016) and HITMAN2 (2018), not as an arcade, will be changed so that they can be fully enjoyed in HITMAN3 as many times and at any time.

Unless IOI plan to reveal more suits to unlock with new Elusive Targets, I think the reoccurring activation of current Elusive Targets will continue for the rest of the year, possibly leading into 2023 as well with the new Freelancer mode arriving.

Personally, I wish they’d release one more new Elusive Target for each map, one who is able to move all around the map. Most of them, and Paris, Bangkok, and Santa Fortuna are particularly guilty of this, remained in one area and rarely moved around. And while some did a little bit of traveling (The Chef moved between floors in Paris, the Twin traveled the streets of Sapienza, the Bookkeeper walked around half of the farm, etc.), they still remained in a limited area.

I would like one ET in each map, who has reason to travel freakin’ everywhere in that map. They’d stay in each area for a while, giving the player time to find them and strategize, but after a while, they move along to another area of the map. This would be particularly challenging in Mumbai, as they’d be traveling the streets and chawls, the train yard and laundry, Rangan’s building and the Crows’ hideout. Give us new ones, IOI, one for each, and go whole-hog with it.

Birdie and Lenny from Hitman Absolution would make perfect elusive targets. I’m guessing Berlin at least for Birdie with him being on the rooftop of the biker hangout. Both that location and the radio tower should be guarded. The radio tower key should be in a guard’s possession not hiding under a brick. 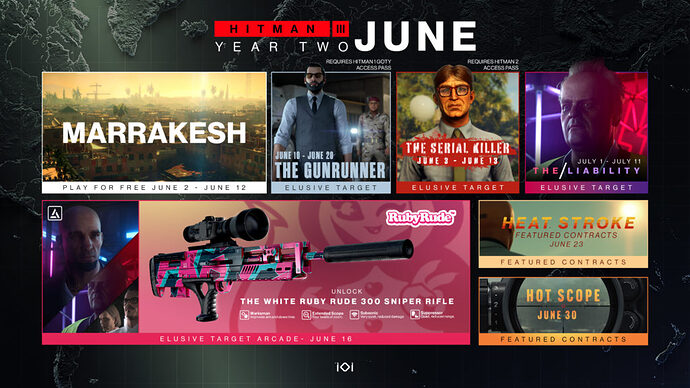 Check out the June roadmap.

Recycled elusive targets, being honest, we are at the death of ETs, all we’ll get now are ETAs or some bullshit stuff

Did anyone really expect new ETs though? They never mentioned it in the Year 2 Reveal, so not sure why anyone would’ve thought we would get any new ones.

I didn’t and don’t really expect new ETs, but they still would be a welcome addition to add more variety to the ET Arcade and IO had really hit their stride with the later Hitman 3 ETs, especially the Ascensionist. There are many underutilized areas in Hitman 3 maps (and the legacy maps) which could benefit from having an additional ET.

I think it’s definitively a bit of a letdown that we only got 7 new elusive targets in Hitman 3, which sure, is the same number as Hitman 2, but at least Hitman 2 had the special assignments , Sniper Assassin Mode and two extra story missions/locations. Hitman 1 had 26 elusive targets. So it is a bit underwhelming. There’s so many underused portions in these maps that could be so well used by elusive target missions!

I can understand why people would be thinking “it would be cool to get more” and have some disappointment upon realising that it most likely won’t be happening. I just don’t get where anyone got the expectation that there would be more.

Because IOI said there’d be a change to the ET formula and we didn’t see that with the first seven, so we were expecting more to come after the ones associated with the 7 Deadly Sins we’re finished that would live up to that promise.

Mind you, this was before we knew Arcade mode, Freelancer, and Year 2 ET releases were coming. Freelancer alone kinda makes ETs redundant.