Where is Deluxe Edition downloadable bonuses?

Where can I find Deluxe Edition downloads - Soundtrack and Artbook - on PC? Checked game files and “Documents”. No bonuses found.
Or should these bonuses be on the IOI account page? So there are only costumes and the first part of the comic, nothing more.

I think you’ll get them through the IOI account page (like the costumes and comic book), but they aren’t available yet.

Which is a shame because I really want that soundtrack.

But still, no one can even roughly say when bonus materials will appear? Because the servers and the transfer of progress seem to have already fully worked.

it’s still a mess. Give it about a couple weeks.

I downloaded them but they‘re not showing up – not before carrying over my progress and not after (I re-installed the add-on, too).

I do have the special introductions from the developer though. So I think nothing went wrong with my pre-order. I pre-ordered the Standard Edition first, refunded it and got the Deluxe Edition instead (after figuring out that the soundtrack is for ALL three games).
I am on Xbox btw.

The deluxe outfits are awarded when you start the corresponding Escalations. (One in Dubai, one in Chongqing and one in Dartmoor, if memory serves.) The briefcases and guns are awarded by completing them.

Ahhh, thanks! I‘ll check it out ASAP.

Bringing this up because i have a problem. I used my code of the deluxe edition yesterday and so far i see nothing, i mean no new escalation, no costumes. I tried through the Store, updating the game, logging on/off, etc. Is there a way to be sure deluxe edition has been granted into my game? I’ll check the rewards in Dubai, Chongqing and Dartmoor tomorrow. Thank you.

I used my code of the deluxe edition yesterday and so far i see nothing, i mean no new escalation, no costumes. I tried through the Store, updating the game, logging on/off, etc.

Is there a way to be sure deluxe edition has been granted into my game? 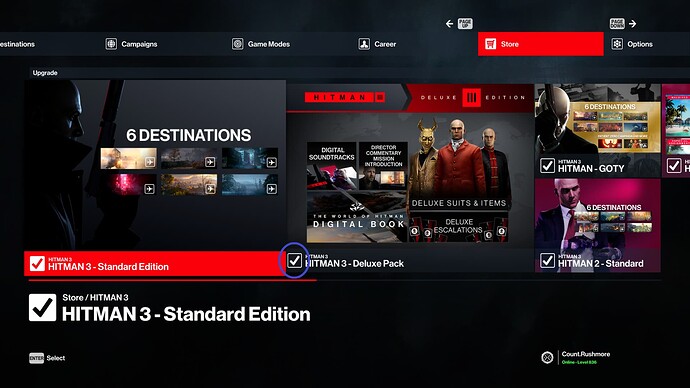 Thank you @Ibbe and @Count.Rushmore. I noticed both the star proving the ownership and the Escalation Mission in Dubai as well as the Dartmoor’s. I guess the yellow star means Deluxe. Can’t figure which one of the escalation mission is the one that rewards you with the chinese costume though. I suppose it’s in Chongqing, but there is no actual visual.

It is in Chongqing. Look for The Lee Hong Derivation. The suit should unlock when you start the escalation.

Any issues just log it via the player support section.

I have them all! Thank you all for your help!