Why, for the third game running, does IO insist on featuring the Kotti Paradigm, the worst escalation in the game bar none?

It’s terrible. I don’t know how anyone’s supposed to work it out without a tutorial, and even following one it’s so easy to mess up at the last minute and ruin your SA.

But if you don’t like it then you don’t have to play it, no one is forcing you

That’s just an inherent risk of escalations and contracts

to not piss off @TheKotti

I shed man-tears doing that one in H2016. It’s such a trap for beginners that just started playing the game and jump straight on the escalations. There should be a difficulty warning for all of them, I say. 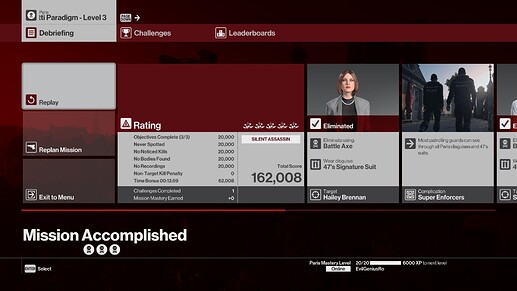 There are much worse escalations out there.

Honestly with just how much shit was included in 2016 (hope you like invisible landlines and lasers) it was one of the more okay ones from the first game.

That isn’t to say it’s good, just that things were less consistent earlier.

also the worst one is the one with those mines.

The red menu is bringing me tears.

It’s been so long

I used to love the UI, now I look back on it the same way you do awkward photos of yourself as a teenager

it being hard doesnt make it bad

I forgot about the Duke Nukem style trip laser bombs. I hated those! But they taught me early on that you could shoot the recording device for cameras. Paris 2016. Some stupid escalation that (I think) was trying to get you to go all the way around and I thought “maybe you can just shoot the TiVo box” and you could!!!

The Kotti Paradigm is just very well known since the beginning and is extremely hard. I think for that it deserves it’s spot.

I always wished instead of “if you do a vault or climb you will fail” it was “the button to perform an agility move will not work.” I kept accidentally vaulting over something I could easily have gone around.

Yeah that would be a good thing, also I’d like that complication to exist in contract mode. Among many other things.

Honestly, I do reckon contracts improvements is on IO’s to-do-list. It’s just behind Ochoa’s C47 remaster

The red menu is bringing me tears.

It’s been so long

I have H1 disc with the old version and updates on PS doesn’t effect the disc. So I can play the old way by removing the update whenever I want.
It really gives a great first-time-play impression.

So this thread made me go and replay the escalation, and I’d say it’s not too bad if you take it at a steady pace. The final target is perhaps a poor choice tho as she’s already heavily guarded and you have to follow a very linear path to get to her

The Mallory Misfortune can get absolutely fucked! It needs to be nuked from orbit, not brought back into HITMAN 3. There’s a very good reason it didn’t re-appear in H2; it needs to stay dead!

Takes a while to figure out a route on the later levels but it’s certainly not the worst one.

The escalation in Miami where you have to pacify a couple of joggers with a soda can is pretty dull.

I’m still waiting “The Hamartia Compulsion” to come back