Why I haven't played Hitman 3!

The reason why I haven’t played Hitman 3 yet, is because of bad customer service from the Square-Enix Store.

I pre-ordered the game on the 9th of Dec. from the Square-Enix Store. I get an email the 3rd of Jan. informing me that they will soon be preparing my order for shipment and in preparation they will begin charging for pre-orders on the 6th of Jan. and to make sure I have enough funds to be able to pay, because if not, they will be cancelling my order. I then get an order complete email from them on the 6th of Jan. saying my order was complete and they have charged my credit card for the amount, so I assume that it is ready to be delivered so that I will have it on or around the 20th, which was the release date.

On the 20th of Jan. I get an email with my pre-order code. As I haven’t received my game on the 20th, I take it as having been delayed in transit. After a couple of days, I start to wonder where it is. But before I go and make a ruckus about it, I check the website for the delivery times, which said to allow for 3-7 working days.

I then contact costumer support on the 3rd of Feb. to inform them that I haven’t received my copy of the game yet. They then reply the next day with an apology and that they will investigate the matter and get back to me.

A week passes (12th of Feb.) and I reply back asking for an update. I also inform them that because they made a charge of €0 to my credit card when i put in the pre-order back in Dec. which caused my bank to lock my card, because of suspicious activity, that it might have something to do with it, but it’s not likely since they charged my card fine in Jan.
I also attach images from my Square-Enix account of my order (which I’ll also put here) 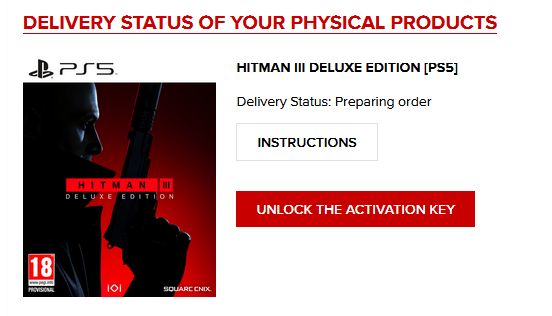 Hitman Purchase History1502×492 27 KB
Which clearly shows that they were apparently still preparing my order.

They then reply back that I am right, that the delay is way too long and that they have contacted the team again to provide an answer asap. They also note that they would like to offer some sort of compensation for the delay.

Another week passes (22nd of Feb.) and I’m replying a little firmer that I would like to know what is going on with my order.

As I don’t get a reply back and as yet another week goes by (this now being the 1st of Mar.) I decide to make a new support request hoping to get another support person, since the last one didn’t communicate that well. I write out all that has happened up until this point, sort of like I’m doing here.

Another person replies back and again says sorry, they have been overwhelmed lately. They then give me an answer that it looks like my order hasn’t shipped because of a technical issue in their warehouse and they have requested that my order be shipped as soon as possible.

I then reply back that, that is great and all, but now I can buy the game for €20 less and get it in a couple of weeks (since they were sold out everywhere), so I ask for compensation in the form of €20 returned to my card and they still delivering the game, or else I’ll just want them to refund my everything, so I can order it cheaper elsewhere.

They then reply that they have gone ahead and cancelled my order and refunded me my money.

I then order it at another place that I have bought with before and today (13th of Mar.) I’ve finally gotten my game.

This whole ordeal have just put a bad taste in my mouth regarding the Square-Enix Store, but I guess you should stick to the tried and true stores since they know what they are doing as that is their business, instead of these publisher stores, which apparently doesn’t know how to run a store.
(PS: I also had bad experience with the Ubisoft Store)

Sorry to hear you had such a long delay of laying your hands on the game, but at the same time it’s great that you have your game by now. I hope you’ll enjoy it despite of bad experience with getting it.
Also to be honest I’m bit surprised that SE agreed to refund that simple.
But everything is well that ends well, right?

Yeah, I’m just saddened that I have had to wait 1½ month to be able to play the game. But again this is mostly because I am old school and like to own physical copies of my games.
I even got a PS5 at the beginning of Dec. which is why I pre-ordered the PS5 version of the game.
Sometimes I just feel like, because I have a lot of patience, that I’m taken advantage of.
But yeah, all is well, as at least I have a PS5 before many others.

See it that way: Because you had to wait longer in the beginning you are now not constantly waiting for content drops like most of us.

That’s right, although I had hoped to play before missing the first elusive target, but I can hope that they’ll be back in a year or 2.

Not a console guy but it’s funny how official stores often have worse service than others. You’d think companies would want to incentivize you to give them 100% of the profits on their store, but instead they push people to third-parties. Same thing is true in PC digital stores, it’s far easier and better to just use Steam, GOG or Epic.

Wait, Square-Enix is still affiliated with Hitman? Then what the h*ll was Squexit all about?

It was distributed by Square Enix in Europe, Middle East, Africa and Australasia.