The WoA trilogy has now explained that 47 killed Diana’s parents, how he did it, and that he did it before they were both recruited by the ICA

But unless I missed something, I don’t understand exactly why. Who were they, who did they wrong, what did they do, and who got 47 to do it, seeing as this evidently precedes any game event (apart from C:47s first training level)?

If there’s no actual answer to this, I will accept speculation and theories

Blue Seed Pharmaceuticals released chemicals in the water supply that killed Diana’s brother. Her father then sued the company repeatedly and did all he could to hold them responsible. The company hired freelance 47 to take out her dad, mom just happened to get in the car too early.

mom just happened to get in the car too early.

He was young and barely trained, lol

Nah it’s cause Blue Seed wanted a loud message, the collateral damage was ok. (Kinda like when 47 killed Richard Armstrong’s bodyguards cause the client wanted to send a message). 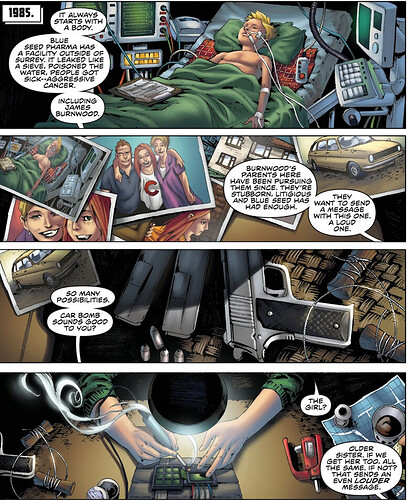 Diana’s father also mentions having a source who, if he checks out, could blow the whole thing wide open.

I think this was when 47 was at the institute right? I was a little confused by the comic but I think he did this hit with 6. So was he freelance or was it that the institute/Providence contracted him out to Blue Seed?

I am not sure. Let’s just say he was still in the indys, hadn’t yet made it to the major league

Why the Parents? Because Drama, that’s why.