Will Sony buy Project 007 as a PlayStation exclusive?

Sony Interactive Entertainment has a team of Sony exclusive developers which it supports in making highly polished, narrative-driven single-player experiences: Naughty Dog (Last of Us), Guerilla Games (Horizon Zero Dawn), Insomniac (Spiderman), Santa Monica Studios (God of War) etc. They are probably looking at adding to their roster of Playstation exclusives to compete with Microsoft.

I can see Sony Interactive Entertainment trying to buy up IO Interactive, or to make Project 007, a third party exclusive seller for their PS5 console.

Project 007 would be a cheap purchase for Sony Interactive Entertainment in a bid to compete with XBox in selling future consoles, just as Spiderman, God of War, Horizon Zero Dawn and UnCharted were/are console seller titles for Sony.

IOI has had a previous relationship with Sony in their PSVR exclusive deal with Hitman VR, and the Playstation exclusive “Sarajevo Six” missions for Hitman2016.

The advantage of being purchased or having a deal with Sony Interactive Entertainment or Microsoft is that you don’t have to worry as much about the cash crunch as an independent developer.

You lose some independence, and ability to make money on all platforms, but the advantages of being a console exclusive developer in some cases outweigh the disadvantages.

Obviously there were more disadvantages than advantages to IO Interactive’s relationship with its previous owner, Square Eniix.

It may be different with Sony Interactive Entertainment, where the long term investment could be a better partnership, where IOI gets long term financial stability and Sony grabs a key seller of their future console.

This is just speculation.

I’d hope they’d have enough sense, as a developer that generally has quite a good relationship with its fans, to know that doing something like this would do significant damage to their reputation.

is the extra money worth it? maybe, we know they’re no stranger to making exclusivity deals for a bit of extra cash. but I think even for them this would be going a bit too far

I can see Sony Interactive Entertainment trying to buy up IO Interactive, or to make Project 007, a third party exclusive seller for their PS5 console.

I cannot. IO has gone through a massive hassle buying back their own independence and despite that they’ve actually managed to acquire one the most famous media IPs to make a new game.

I can’t see any reason they’d want to sell right now, even for a fair amount of money. Things only seem to be on the rise for them right now

I think that proposals and discussions have already likely happened between Sony and IOI at a management level.

I don’t think that many think less of Insomniac Games or Guerilla Games for being a Sony exclusive developer.

The video game industry is a business, and a very expensive business to produce, with projections of sales that are greater than blockbuster movies now.

It isn’t just IOI, but all video game companies have to find the tens to (often > hundred now) of millions of US dollars of capital up front to produce a AAA video game. The cycle is not easy, because one video game with poor sales can kill a company, as IOI knows from experience.

I think if this 007 project were to be a Playstation exclusive, we’d have heard of it at the time of announcement.

Would be pretty interesting to see Bethesda’s Indiana Jones project (most likely an Xbox exclusive now) vs IO’s Bond on the PS, but I think IOI would really like to stay independent. (There’s a possibility Sony buys a time-limited exclusive deal for the game, but I don’t think that’ll happen.)

There is the other question to of how much control EON has over their game. The only way to know for sure would be to read the contract but they may have the right to nix a part of the game they don’t like or require the game to take a certain direction story wise ect. Relevant to this, they may have the final say on any platform exclusivity deal. The ultimate goal is to generate income, but 007 is a large brand so EON may not want the game company making this kind of choice without their say-so.

Goldeneye the game introduced a whole new group of kids to James Bond. Some had seen the movie first but some saw the movie bc they played the game. This game could do the same type of thing and the more platforms you are on the more kids will play you.

Yes, given that (EON) Barbara Broccoli and family keep a tight reins on the James Bond 007 IP, I assume that their agreement with IOI includes what game platform Project 007 is published on.

Of course, IOI is paying a lot of money in royalties to EON to use the James Bond IP. IOI is starting with big royalty payments to pay EON, regardless of sales of Project 007. It isn’t like Hitman where IOI owns the IP.

To make up for the high costs of production of Project 007 it isn’t unreasonable to project that IOI would look to partners/investors to ensure that Project 007 is profitable.

Hitman where IOI owns the IP.

IO doesn’t own it. It was or still is under an exclusive license from SE for some (unknown to us) period of time.

Firstly, when the Project was revealed it would of been explicitly said, fortunately we have this anecdote from the blog post about it.

Project 007 will be powered by IO Interactive’s proprietary Glacier technology and will be made for modern systems and platforms. 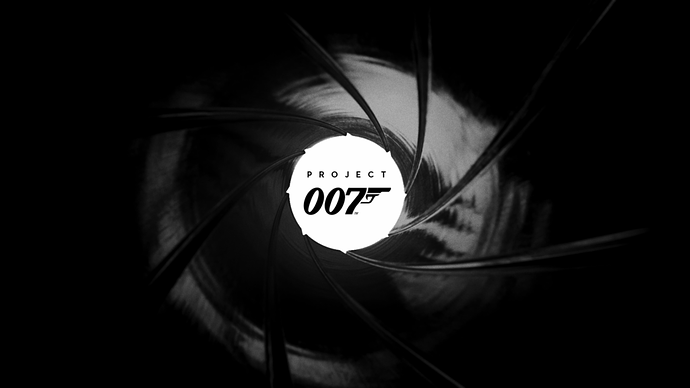 Project 007 is a brand new James Bond video game with a wholly original story to be developed and published by IOInteractive.

IOI has the video game license currently for James Bond and the only possible way for any form of exclusivity to come out of it is if Sony, IO, and EON/Broccoli.

These conversations would of happened by now and simply as I said above would of been revealed during its initial reveal.

True. They do currently pay royalties to Square Enix, but they do have proprietary rights to use and profit off of the license.

I have no idea what the deal looks like. I imagine it’s a % of gross sales or a flat fee per unit shipped. Like anything else in life that requires a contract, those things can be very straight forward or infinitely complex.

It is still early in the development of Project 007, and like any video game project, it may never come to fruition.

There are input cost and time to complete the project, and as with any project, there are projections and estimates, but more unknowns at this point than what is known.

It seems that if an exclusive deal was made, it may have been set out from the beginning. Or a financing deal may crystalize down the road when the scope, costs and time are known for the project.

Your not hedging your bets here: “straight forward” to “infinitely complex” covers the gambit.

I took my guess (% of sales). It’s all just fun speculation though.

IO doesn’t own it. It was or still is under an exclusive license from SE for some (unknown to us) period of time.

Not true. They kept the Hitman IP as part of their management buyout

Crucially, we will keep all of the rights to the Hitman IP…

As of today, we have complete control over the direction for our studio and the Hitman IP – we’re about to forge our own future

They kept the rights by way of exclusive license. It’s why the little tiny print legalise screen at the start of the game changed to include “or under license.”

Do you have a source for that? Everything I can find states IO owns the rights

) it will say “…HITMAN, The HITMAN logo and WORLD OF ASSASSINATION are trademarks or registered trademarks owned by or exclusively licensed to IO Interactive A/S…”

Also you can view a list of SE trademarks, copyrights, patents at the USPTO site here.
https://uspto.report/company/Square-Enix-L-T-D

Yeah, so the credits say “owned by” so that’s not conclusive either way. And the SE Hitman trademark is from 2018… when they did own it. That’s not solid proof they still own it now

Anyways, this is off topic. So I’ll agree to disagree on this one

IOI was or is paying royalties to Square Enix. It may not longer be the case though.