Will we get "Hitman 3 year 2" monthly roadmaps?

Hi there fellas! I really felt the need for starting this thread, cause im not understanding why after a week we aren’t getting any monthly roadmap for example, from 21st Jannuary to 21st February where we see what is coming every week. Do the roadmap are dead for year two, do we get just a year roadmap further, or what? Please, @Clemens_IOI @Travis_IOI could/can you tell us something about it?

No info arrived yet.
I personally doubt it if you ask me

I imagine the earliest we would see one if next week if IOI decides to return to a monthly roadmap after doing the seasonal roadmaps. This would be in-line with a year ago after launch.

After the release on January 20th 2021, we had a monthly roadmap announced on February 4th.
Perhaps, it will be the same. 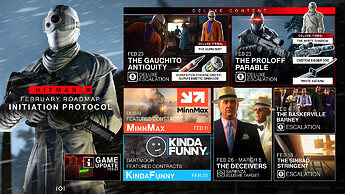 Surprised they haven’t said either way. If we do get them though, it will likely be mostly featured contracts and elusive reruns.

Well one thing is sure there’s still a weekly content, last week Arcade and this week the heartbreaker #2… so… maybe we get it on February directly.

I would be very surprised if we dont get roadmaps. Year 2 to me sounds like a continuation of things we did get before. Plus its the most convenient way of informing players whats coming next.

Since it’s only the last 2 weeks of January, it makes sense IOI would probably want to start a new roadmap at the start of the next month. The Heartbreaker is doing another ET round then, so that lines up.

And as @Force_Obscure so smartly shown, they did that same thing last year. So we can probably expect a usual roadmap around then.

Anyone remember when they stopped doing roadmaps for H2?

That was about a year and a half after initial launch, I think.

Those “Year 2” roadmaps were ET reruns and Featured/Curated Contracts if I’m not mistaken, as well.

This was the last Roadmap of Hitman 2, as archived by @Swangtheugly 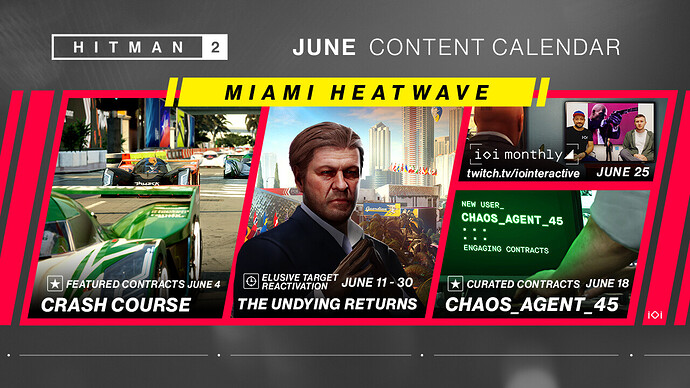 Pretty sure this month also ended with the reveal of Hitman 3, so that was cool!

The next ET (Heartbreaker) seems to be a new batch of ET, as it is called ET #2 and it is present twice in the ET folder in Hitman menu. During the short reactivation of H3 ET in December 2021, they were not doubled in the ET folder.

Sounds like Heartbreaker #2 would initiate a new run of ET, available for everybody, even those who completed or failed the first time.
Moreover, the Heartbreaker #2 is planned in 6 days, circa 4th February.

Thus, Heartbreaker #2 would likely be the lead figure of the first 2022 roadmap.

Thus, Heartbreaker #2 would likely be the lead figure of the first 2022 roadmap.

A thread entitled “Hitman’s Valentine’s Day” gave me an idea:
Like the previous roadmap where the ETs were somehow connected to the main raodmap’s theme (Gluttony and the Food critic), it’d be very likely the case for the first roadmap. The Heartbreaker would be the lead figure of the February roadmap with the theme “Valentine’s Day”.

The potential ET that could fit with the Valentine’s theme are:

does anyone really care about roadmaps anymore? I get the sense IOI, and it’s devs are winding down, burning out, and getting tired of Hitman. The Rocky escalation map and freelance escalation mode will be the final nail in 47’s coffin, until the next game in 2027.

does anyone really care about roadmaps anymore? I get the sense IOI, and it’s devs are winding down, burning out, and getting tired of Hitman. The Rocky escalation map and freelance escalation mode will be the final nail in 47’s coffin, until the next game in 2027.

The monthly roadmaps made sense when there were future releases of Hitman seasons to attract new and returning players. They aren’t burned out or getting tired of Hitman. IOI have mostly reached a ceiling of what they can make out of the Hitman Trilogy. They need to invest in their new IP, such as Project 007 where their big money future is, with the high profile franchise. If they had extra resources, they would continue to milk more out of Hitman. It is just a changing priorities for IOI.