Would there be a chance to use Diana as the main character?

I like this character more and more. If there’s a campaign that the player needs to control Diana to finish some missions, that’ll be awesome.

Or she could just do everything well like 47, it’s another fun.

There is a mod for the pc version of Hitman 3 that allows you to “wear” Diana’s disguise. I think it’s this one: 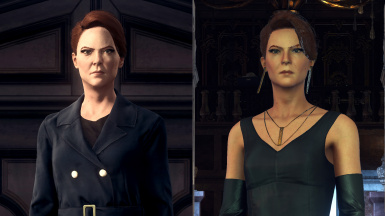 But it’s gone once you switch to another disguise, still better than nothing if you really want a playable Diana.

Thanks! That’s nice! I’ll definitely try it. Just don’t know if it’ll ruin the version checking by EpicGame platform, though.

Anyway, what I’m expecting is not just to see the look. I want some stories and missions especially for Diana. And the restrictions can be part of the fun, because it’ll drive the player to adjust the strategy.

This has kinda been discussed before. Not specifically Diana but just playing as a female character. The main issue with the game is that now you would need female guards and a well thought out placement of them to keep the game playable as both 47 or Diana.

Would every strategy be playable as either character or would some be limited based on your character? Unless you mean one level where you can play a Diana but not as 47? The latter might be easier to implement and I think would be a lot of fun as a one time only thing.

The main issue with the game is that now you would need female guards and a well thought out placement of them to keep the game playable as both 47 or Diana.

Why would you need female guards?

I suppose you don’t if 1) Diana can’t take a guards costume, or 2) the game magically makes the guy guards (who seem to all be 47s size) clothing fit her.

Absolution had larger males than 47 (specifically the some Chicago PD officers) and also female guards and 47 couldn’t take either of their costumes.

She is almost as tall as 47 but the tailoring of the shirts could be an issue. Maybe if there was a boss disguise like the hotel manager in Bangkok, Diana could take that and just walk around like she owns the place, with a handful of long time employees as enforcers.

Yea that idea works but it changes the game play. It reminds me of game boy game called fortified zone. There was a boy and a girl as playable characters and each had a unique advantage* over the other. I would suggest that if Diana can’t impersonate a guard that she have some other advantage. This is just my opinion, but rather than that I would simply prefer to have female guards and have Diana be able to use the disguise system in the same way as 47 or, as I suggested above, maybe just one level where you play as Diana but can’t play it as 47.

So I was side tracked by the costume thing, but I’m not sure why you have these restrictions? Ladies can shoot rifles, knock out people with their fists and climb.

If you played as Diana, I’d expect a pretty significant change in gameplay and objectives, as she is ultimately a handler and not an assassin.
Using stealth, as well as some persuasive dialogue options to get by things, in order to gain intel for an upcoming hit, while not attracting any suspicion or future missions would be compromised. With this, there’d be no violence/KOs, unless you’re successfully offing someone and hiding their body (not just in a crate) but even then you’re causing potential issues for a hit

That’s kinda why I liked the one level idea better. Back up against a wall and I’m sure she can handle herself. Many levels as her? It doesn’t really fit the story. Before WOA I kinda wanted a level where you either played as smith or maybe even just briefly played as smith (like if he had to complete some task to help 47), but by the same thought process I would not want to play as smith for an entire game.

So I was side tracked by the costume thing, but I’m not sure why you have these restrictions? Ladies can shoot rifles, knock out people with their fists and climb.

Indeed ladies can do that but with proper training. Actually not all men can do these without training. 47 could do them all because he’d been trained since he was a kid. I admit that I don’t know too much about Diana’s background, but I assume she’s not an assassin type.

Since my first idea is to provide 1 or 2 levels for Diana’s story, it’ll be on the perfect balance to keep some restrictions, to fit her profile and to set up a new strategy of gameplay.

Why would you need female guards?

I guess he’s thinking about guards disguises for Diana, to keep the whole gameplay almost the same. But I think it’s no problem. Diana with a male disguise just causes additional suspicious factor - got easier to be compromised, which makes the game fun.

Wo, that reminds my the scene in Metal Gear Solid 1, when Snake saw the weird walking of a “male” soldier by the way how the butt moves.

I kinda get the making the game more difficult aspect but I can promise you it’s 100x easier to be accurate with a rifle than it is with a pistol, and climbing and throwing a punch are easier with practice, but both can be done without.

Anyway ultimately, yes! I would be in for a level where we play as Diana next time around no matter how all these details gets sorted (=

Seriously, do you guys think that there might be a little love between Diana and 47? A part of me sensed it from Hitman™ 3.

I really hope they don’t go down that path. Little suggestions and undertones are fair, but I’d hate it if they whittled Diana down into ‘47s bit of crumpet’ Their relationship is ultimately professional and they have a good dynamic, and it’d be a huge disservice to her character to have it just evolve into a romance like the media loves to do whenever they have a male character and a female character who interact

I really hope they don’t go down that path.

Can’t agree more. Just keep it in that way and it’s perfect. Otherwise it goes to some boring TV play, like, GOT.

The thing is, you can’t just let certain hero to really have relationships with a woman. He can have emotions, but it shouldn’t go deeper. Or it’ll ruin the character setting. James Bond tried once, to marry one woman, then she has to die.

There’s similar setting in the 47 movie. 47 has something on that girl, but he kept it in that way, as she is something that he cherishes in the world. He would eliminate anyone who attempts to harm her, which is similar to what he does for Diana in the game.

Their relationship is ultimately professional and they have a good dynamic, and it’d be a huge disservice to her character to have it just evolve into a romance like the media loves to do whenever they have a male character and a female character who interact

Hard disagree. The typical romantic set up in American media involves some immature douchebag bumbling his way into a position the female lead is usually far more qualified for, all the while portraying her genuine and understandable irritation with him as her denying her feelings or needing to be “dethawed”

And that’s if the writers put any effort into it at all. A lot of “romances” are just man and woman stand next to each other and then cut to them kissing with no build up or explanation of why they even like each other.

Our writers are different. Look at the way they portrayed Diana in the WOA trilogy. She’s smart, willing to play dirty and, most importantly, she’s in physical danger exactly once and it’s completely optional. Do you know how many stories don’t even start out with that as a foundation for their female characters? She has been directing 47’s professional life for 20 years. She was the one who had to decide to stop using him, to let him exercise his free will. He never would have left her on his own. If anything, 47 has been Diana’s little bit of crumpet!

I think you misunderstood what I was getting at. It’s exactly because the writers have portrayed Diana well which is why I would object to a romantic relationship. There’s a lot of depth to her, showing that she is capable and smart. She doesn’t need that element to her relationship with 47 because it’s already handled well, and romance would just be some predictable arc that you’d expect in a fanfic.

A male and female character should be able to have an interesting dynamic without sex getting thrown into the mix. IO have made it work so far, so I don’t see why they’d have to resort to that tired old trope.