Would you be interested in a HD trilogy remaster?

Hitman General
Danger_dog_guy_7 August 24, 2022, 12:48pm #1
Would you be interested in a Hitman trilogy remaster for current/next gen? 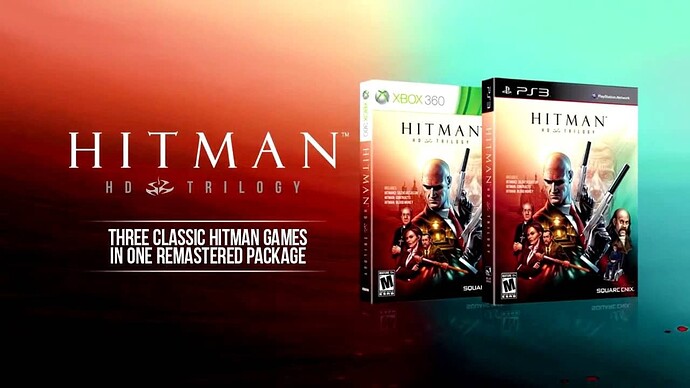 Like many of us know, IO Interactive came forth with a Blood Money + Absolution remaster in 2019. This pack included many visual upgrades including higher resolution textures and a slight HUD overhaul. Now, it’s no secret that Absolution isn’t considered a fan favorite and that quite some people only bought the pack for Blood Money. In 2013 IOI published the Hitman HD Trilogy including Silent Assassin, Contracts and (again) Blood Money. This was released on PlayStation 3 and XBOX 360. Since these 3 games are considered classics and are more or less left behind for console players; would you be interested if IOI would re-remaster this HD Trilogy pack again for PS4/5, XBOX One/Series X,S and PC?

I might have been, but you had to throw that last sentence in there…so I’m out.

I’d be even more interested if they replaced Blood Money with Codename 47.

WHy IOI don’t do it remake all old hitman games ? This is was be cool.

I don’t have a console so a remaster for PS 4/5 or Xbox would be useless to me.

Updated the OP. Thanks for the headsup

I have changed my vote to Yes then. Thanks!

even more interested if they replaced Blood Money with Codename 47.

But yeah, let’s make it official:

CODENAME 47 HD REMASTER FOR CONSOLES WHEN?!

60 bucks pricetag is nearly justified if they add C47 to the bunch.

I would buy Codename 47 HD Remaster alone for 60 bucks tbh.

But adding the HD Trilogy to the Playstation Premium or Now or whatever its called would be cool.

Seems redundant that they would release the HD Trilogy if Blood Money was re-released with the HD Collection. That and the HD Trilogy is available through the BC Program on Xbox.

So I can say with confidence and the current state of IO where the focus is concluding HITMAN 3’s support and working on Project 007 and the new IP too that there schedules are filled.

Yes, but I would take it one step further.

I’d remake silent assassin,blood money, absolution in HD in the current style they were when they came out.

I’d then remake them using the 2016 build and style that ioi created these past 6 years.

I’d take each mission spread them out individually and add escalations. Add the classics challenges to it as well.

Perhaps create the option with the hut where we could bring items in out of the games.

ioi would make a fortune.

No to simple remaster, because SA and Contracts controls embrassingly bad. It feels like 47 is skating on ice.

While it would be fun to see glossier versions of older Hitman games, my brain says it’s better for those resources to be spent elsewhere.

Plus, we already have a remaster of Codename 47 called Contracts.

Plus, we already have a remaster of Codename 47 called Contracts.

Its not a Remaster. I wouldn’t even call the missions in Contracts Remakes, more like re-imaginations.

I was being a little facetious. However, remakes entail some re-imagining. Empirically, the structure and design of those levels is almost identical. I don’t see how the distinctive atmosphere and gameplay of the first game can be satisfyingly replicated. It was a product of its time, and that’s what holds it up.

Anything new will be accused of diverting from the original.

While it would be fun to see glossier versions of older Hitman games, my brain says it’s better for those resources to be spent elsewhere.

That may be true, however IO still remastered the one Hitman game everyone shits on. Call that a waste of resources. Say you want a remastered BM version today (for console) you’d need to buy Absolution with it. IO were smart with this one, because near noone would re-buy Abso on its own. Probably rather the HD trilogy than this current 50/50 deal. Hence the thread.