nice bro how long did you take you

I am now 2 contracts away from having finished every Featured Contract in Hitman 3. I think they’re both in Miami though I haven’t looked at the specifics yet. Dang I hate Fiber Wire! So many Fiber Wire contracts!

I cannot say how many times I’ve intended to garrote someone and ended up punching them instead. At least with the guards you can just not knock them out and they’ll get back up but for non-guards, once they go down, the only thing you can do is to either abandon the fiber wire, wait for someone else to revive them, or just start over. Ugh.

Yesterday, I completed every featured contracts in H3. It took me a long time but it’s done now. I found some FC very good. I acknowledge that I didn’t respect every time the restrictions. I tried to get SA, but I found some FC pretty hard.

Welcome to the club! It’s quite an achievement to go through all of them. I also didn’t follow all of the restrictions, so don’t beat yourself up over that one.

So with the final Y2 ET less than 12 hours away, who is still on track for 100% challenge completion incl. the ET challenges and not just 100% on the locations?

Nope. Failed one Elusive Target so that will forever be out of reach.

i meant to say food critic

I think I still have 1 or 2 Achievements to get. Not sure what they are though.

Edit: The only one I don’t have is the ‘Complete The Contract Creation Tutorial’.

I’m not since I skipped the early Y2 ETs due to not having the game at the time and then failed SA on Bad Boy and Ascensionist in silly ways.

Still maintaining my 100% completion up to Freelancer. Just need the last ET and next week’s FC batch.

I’m at 100% completion too, silent assassin with all content except…

I, oddly enough, probably won’t be joining this club. As far as I know, there’s no official marked challenge in the game for completing them all, just for completing a limited number and unlocking some gear, which I have done. Since I don’t particularly like what I have to do for most FCs, I’m gonna leave it at that, and won’t be playing others unless new challenges or unlocks become available through them.

I wouldn’t expect you to complete all the FCs. You have a distinct methodology for your play style which you enjoy that the FCs aren’t a good fit for.

Everyone has a different attitude towards the FCs. I didn’t really get into them with H2016, but went all-in for H2 and H3. Mostly because of the unlocks in H2 at first, but then I discovered how they opened up the game to me that I continued to this day. However, I don’t really seek out random contracts, I prefer the curation that HMF and the FCs have, providing a certain level of quality control.

May I be an honorary member for now? I have 100% in everything that I own - including all the featured contracts and elusives (SA’d, of course). I just don’t have the Hitman 2 DLC + any Hitman 3 DLC that would “truly” make it 100%.

The worst part was redoing all those mission stories on the old maps after the progress transfer. I didn’t even mind redoing escalations, just the stories. I did try to SA the Featured Contracts, but if I screwed up more than once or the contract was just too specific/restrictive, I wouldn’t mind losing the rating.

I’m not in the 100 club, but I’m close, and I’ll probably leave it at that!
All the Main Mission challenges are now done! Quite a few H2’s I didn’t bother to complete/re-complete from Hitman 1 back in the day, and wanted to get this done before Freelancer!

It also took me from the 700-800s to the 900s, finally making my Level Icon swap from the boring Folding Knife to the very classy Fibre Wire. 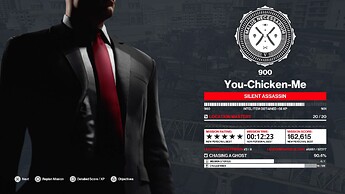 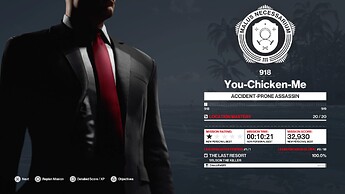 I kinda brute forced some of the challenges, not caring about SA or the “proper, disguised way”.
And usually let the challenges piled up as I restarted and re-loaded levels, that way I could exit just once at the very end and get cool completions like this: 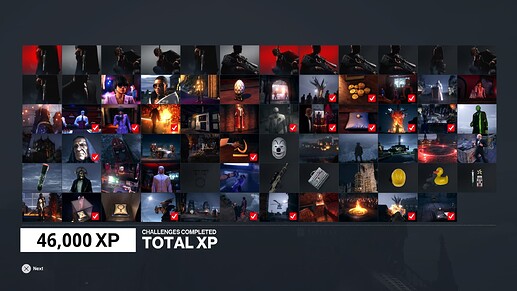 Super special thanks to the Hitman Series youtube channel, I used so many of their guides for tricky, complex challenges.

Although they don’t count as completion… Some of the Easter Eggs I haven’t completed yet. I’m sure I’ve never done the “Mary Poppins” exit in Santa Fortuna, the ducker hunt thing (I still don’t know what it does or is supposed to lead to), and the lucky cat statues for Ambrose Island.

As of last night, not counting Featured Contracts, which only have challenges tied to completing a certain number of them, I reached 100% completion, by finishing the 5th round of the escalation that takes place in the ICA training facility on Kalvin Ritter’s yacht. As I had mentioned earlier, I had planned to leave that one last and finish the last thing left from the very first stage of WoA we ever got, just before beginning Freelancer for the first time. I decided instead to do it a couple of days early, so that I can say I have full completion before Freelancer’s challenges go up. So now, if Freelancer were not coming tomorrow, I could say that I’m fully done with the game. I’ll have one day to be able to say that, until I eventually get full completion on Freelancer. That’s good enough for me.