I hope this topic isn’t too frivolous. It seemed like too big of an idea for a mere post in another topic.

When selecting a suit - let’s say you might have a default set with a shirt, jacket, and tie.

Please excuse my MSPaint job that I slapped onto the pic. But the idea is that you can go through the list of suits, then press (let’s say) Y (on an XB360 controller) to open an accessory menu. 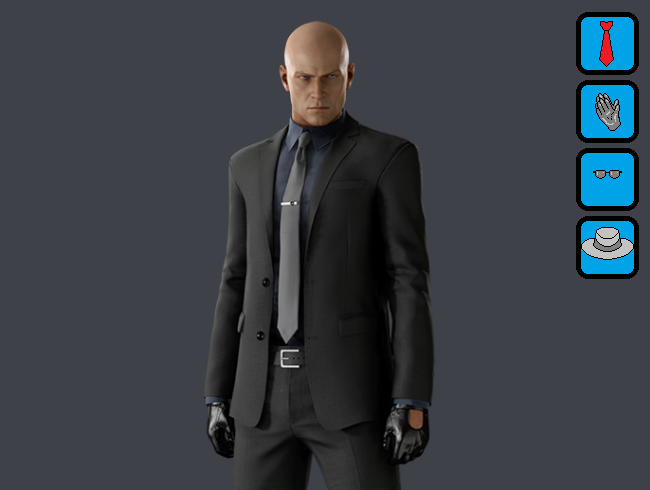 To confirm your selections press A.

More items could probably be added…

Yeah, yeah. I can see this could be criticized as “Playing Dress-up”, but I think we’re overdue for suit customization.

This feature could be added to the standard suit selection menu. It would cut down on the added suits that just have gloves (that you earned killing all those ETs!). Or even the mirror in the safehouse wardrobe.

These are just for the accessories. But I think this could also be applied to picking what shirt, pants, belt, (shoes too, I guess), and suit jacket you could wear. And I know the suit pic I used already has gloves. Just ignore that.

Thats something I’m asking for since Absolution. I’m all for it

The real thing i want to know is can you change the colour of the items? If not: that would be a cool edition to add later down the line. If so: YES!!!

That could depend on preset ties, like red, red with stripes, blue, gray, black, or whatever color with stripes, or what types of stripes… essentially all the ties currently available with whichever suits.

Then there’s the gradient color wheel… I suppose that could be an option.

Edit: There could also be how it’s tied… Like loose on the Sloth Suit.

I personally don’t like that idea, because it’s a tiny line where people may feel that there isnt enough options to express them self in game. And I personaly think this is wrong direction which may lead Hitman to another Fortnite. Predefined outfits it’s enough good for my taste and fits well to Hitman esthetics (besides some kinky outfits like that with duck etc).

And from other hand I just simply don’t get how it enhance experience with game, it’s a logical game after all not Sims/GTA. And there would be probably a lot of videos where players run in pink shirt with green pants etc.

I remember when Outfits was introduced in H1, thre was a lot of complains like “47. Wears only suite with red tie! (Angry emojii)” etc. It’s quite silly but the Idea is that 47 is specific, just like he’s minimalistic style. And that in my opinion is good direction.

I hope you’re done editing so I don’t add my reply before you’re finished.

I don’t see it being taken that far. Besides, there are already mods… Since you mentioned it, a rainbow colored version of the Sloth Suit. Or mods to play as one of the Sniper CoOp characters. I mean, if someone wanted to play as someone else other than 47.

It’d ultimately be for player freedom and creativity. You’re free to do what you want with 47 in your own game. The gradient tool being used to change colors of whatever item… I personally think that’s going a bit overboard, but if it’s about player freedom…

Who am I to argue?

probably a lot of videos where players run in pink shirt with green pants etc.

There’s also someone on youtube that faceapps 47 into having a stupid grin. That’s good because I immediately know how much of a waste of time it’d be to watch their videos - and so I don’t.

That’s what I’d rather keep it as. I don’t see myself going crazy with it.

I will say that there are some outfits, like the clown suit, pirate, santa - that are preset. I don’t think they should be compatible with customization.

To be honest I personaly rather would like too see a weapon customization which bring more value to game than customize an outfit which won’t change nothing in gameplay besides your satisfaction, no offence

I think there is no need for such a functionality in this game. I’m personaly not a fan of “pimp you character” thing but I don’t mind in games like GTA etc. For me that dont fit for Hitman game but thanks for shareing an idea!

Freedom what you mentioned is a matter of personal taste and there is a lot of interpretation of that.

I’m all in for that! I wouldn’t even mind to switch between the parts of the suits. Like changing pants and shirts and shoes.

The suits and costumes of the WOA trilogy are so versatile, it would be nice to combine them. I would love to change the pants from the Colombian outfit, because they are the ugliest pants in the whole game

Like everyone else I am all for it.
Changing shirts, ties, vests, …
Adding watches, gloves, holsters …
Rolling up sleeves, closing the vest…
That would be great. It would allow for some great suits (and let us be honest : some pretty ugly ones

), or even some more casual options.

But, I also think it’s just not possible with the current engine / way the disguise system works. Not without some good rework. Unfortunately.
But for project 007, or the next hitman, I hope they will look into it.

i would love that on freelancer mode

ye do know 47 is asexual right

I believe I have to post this beauty here.
(Unironicaly, I want a system that would allow the creation of such things, but also some more conventional suits) 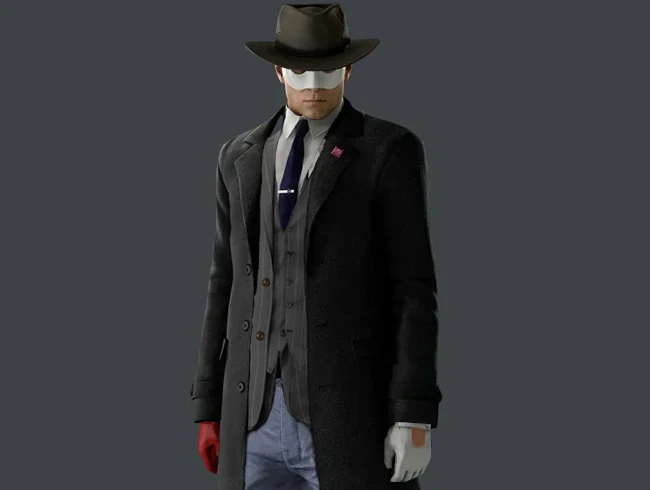 ye do know 47 is asexual right

All he knows is that his OPINION is right.

Anyway, I would love for this option in the game. Not only would it allow me to finally have my Tactical Turtleneck with gloves, but I’d also be able to switch gloves on suits where the wrong ones seem present (this pretty much means the driving gloves on anything except the Sapienza, Miami, and Absolution suits), and putting gloves on those suits that don’t have a gloved version and need one, like Hokkaido and Haven. But I could also have some fun switching around some of the accessories, like having the Signature Suit with the Blood Money tie and the Absolution gloves, and maybe the tie clip. That’d be neat.

All he knows is that his OPINION is right.

No. I’ve just expressed my thoughts about this idea and it’s all what I want to say. You can disagree and it’s fine. But it’s my honest opinion. End of story.

For one your literally going on about people not expressing themselves with 47 in there own unique way, whether it’s in a prideful manner (thats positive nowadays, as it should be ofc) or not, which goes against certain rules and such on the forum.

So with that in mind, why are you bloody surprised that your post (and if you carry on probably more) got flagged.
You seem like a smart guy so come on mate and realised that its not nice to be horrible to certain people whether intentional of not.

I wouldn’t actually be a fan of suit customisation for Hitman. In almost every game I’ve played which offers some kind of outfit selection, I often find myself disappointed by restrictions in the system which don’t quite allow me to create the look I want. I’m left wanting just that little bit more freedom.

Another issue I find is that efforts to provide choices to players can result in a lower overall aesthetic quality of the outfits. Because everything is interchangeable, outfits can end up lacking a cohesive stylistic vision.

However, returning to Hitman, I do find that there are quite a lot of suits which fall into a dull ‘50 shades of gray’ spectrum… 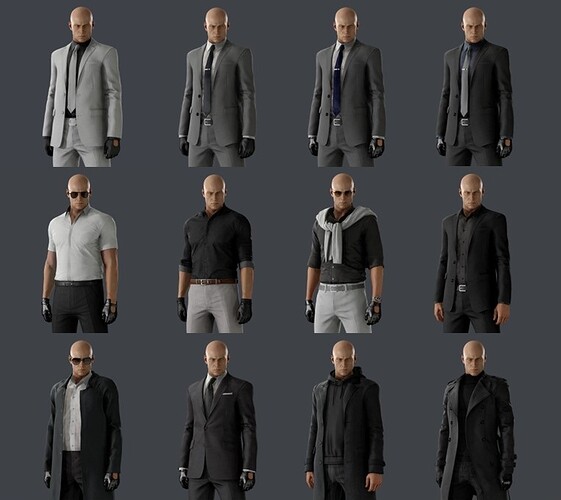 That’s not to say I don’t like these suits. I enjoy the Italian and Casual suits, I think the Ashen Suit is nice and I often use the Casual Undercover to create a particular vibe. Similarly the Summer Sightseeing Suit is unique with its jumper around the shoulders - I just wish it wasn’t black & gray.

I’m not a fan of the Midnight Black Suit or the Phantom Suit - I prefer to use the Ultimate Black Suit, which is very similar. Meanwhile I have no time whatsoever for The Black Streak. I think it’s rather hideous.

To be clear, this is not just about colour. I am fully on-board with 47’s wardrobe being minimalist, with a muted palette of tasteful colours. It’s just about having slightly more variation between outfits, whether that’s a change of colour, material or cut. For instance… 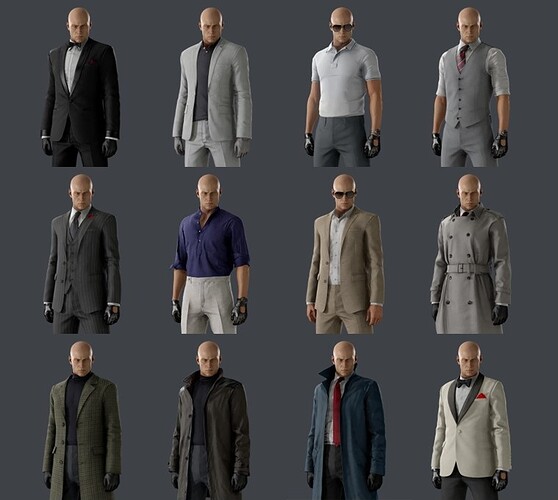 I agree. This is what I want to say. If add such a option to game - there will be opportunity that many people disslike fact that there isn’t enough options to express them selfs. And that could make a Hitman another Fortnite. Thats why I think is better to leave how it is right now instead of making another controversial part of game.

Hitman game isn’t about “how you should feel as Assassin” but it’s about a specific Character with hes specific style and all outfits what are added to game should fit to location so 47 can blend in crowd not how “players feels”. That why I’m against that kind of funcionality because you feel that way other one feel diffrently and that just add another layer of problems to game.

Question is: Is that customization of outfits in this game is a realy essential? I personaly think is not right direction.