A different (and better?) way of bringing the WoA into life. 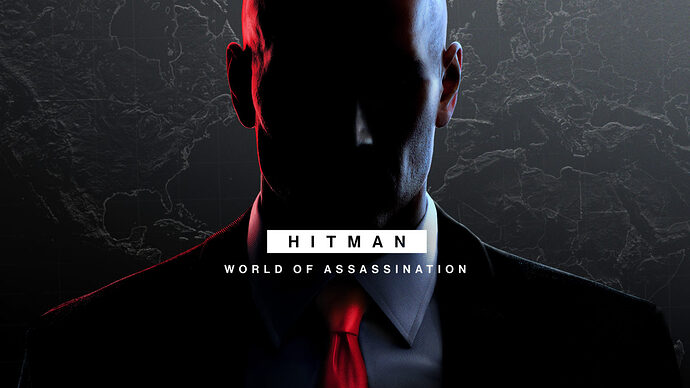 1536×864 138 KB
First of all thank you IOI devs for finally bringing the idea of the HITMAN platform into life. That was the initial idea and i think that’s the best way to play the HITMAN trilogy.

I totally understand that the actual way of selling those games is a confusing mess: multiple versions and DLCs, confusing episodic model split into different categories…so much people have been worried about what version of the games to buy and how to complete their collection for the right reasons.

But i think that removing HITMAN and HITMAN 2 from stores is a bad idea unless you are going to merge everything into one roof for the best.

There are things that i prefer in the first game and others that i like in the latest installment of the trilogy. Restricting the whole trilogy into only one available game would be wrong as there are lots of things that differ from one to another, especially gameplay features!

Putting everything into one roof will mean that players will have no choice regarding gameplay mechanics, graphics, missions, weapons and tools, but also 47’s face. 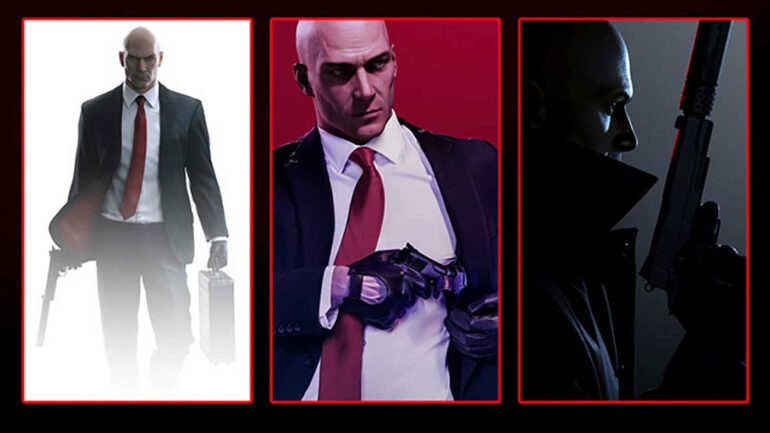 So much things differ from HITMAN (2016) to HITMAN 3 that it is a high risk to propose only one version of the game without checking the ensemble before that.

I suggest you guys to keep selling previous versions of HITMAN but in a more simple way: one package for each game including the whole content, so no more (or much less) confusions about which version to purchase:

Then put the “World Of Assassination” version of HITMAN as the ultimate update of the trilogy, but as another game instead of only renaming HITMAN 3:

Whoever has previously purchased a HITMAN game (no matter what version) gets that new update (and DLCs) for a reduced price and those who have all HITMAN games get the WoA standalone update for free. 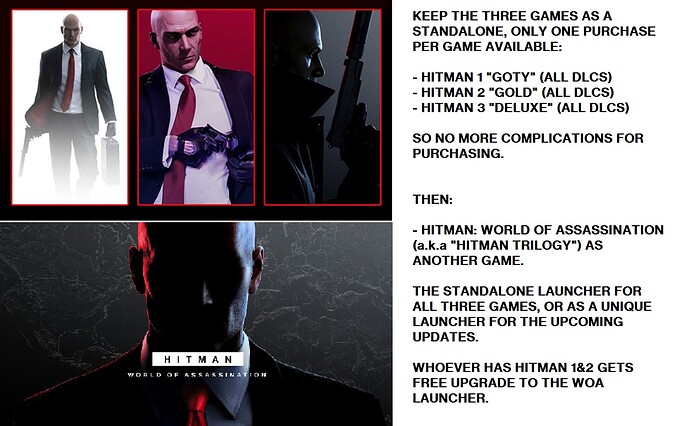 1355×838 271 KB
I think that it’s the best compromise between keeping the legacy games intact and keep offering a wide variety of playing without removing all the work (and content) that has been brought with the previous HITMAN games. 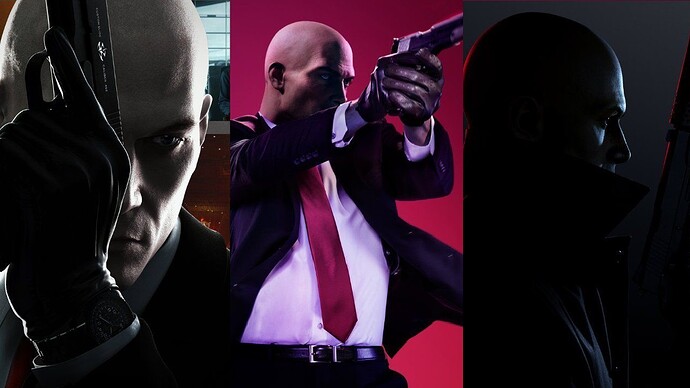 It’s not only a matter of weapons, so much stuff is different regarding the three games! 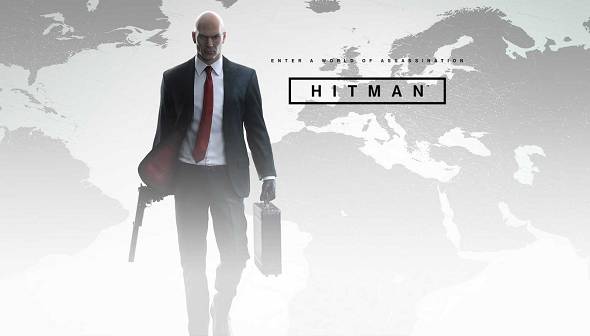 Different rules, different animations, different gameplay (even if close of each other), meaning different tactics and approaches between one game and another…

800×329 31.4 KB
There’s so much to do between those three games, to each level and contract it’s own way to go through it, that would be a shame to restrict all those possibilities to only one game while there’s a huge wide variety of possible combinations by going back and forth between all those versions of HITMAN

I agree with that. In fact, quite a while ago, I made a list on TV Tropes of all the differences between 2016 and the later games (corner takedowns, for example were insanely untrustworthy, now they actually are pretty good). It is a bit of a time capsule in many respects: 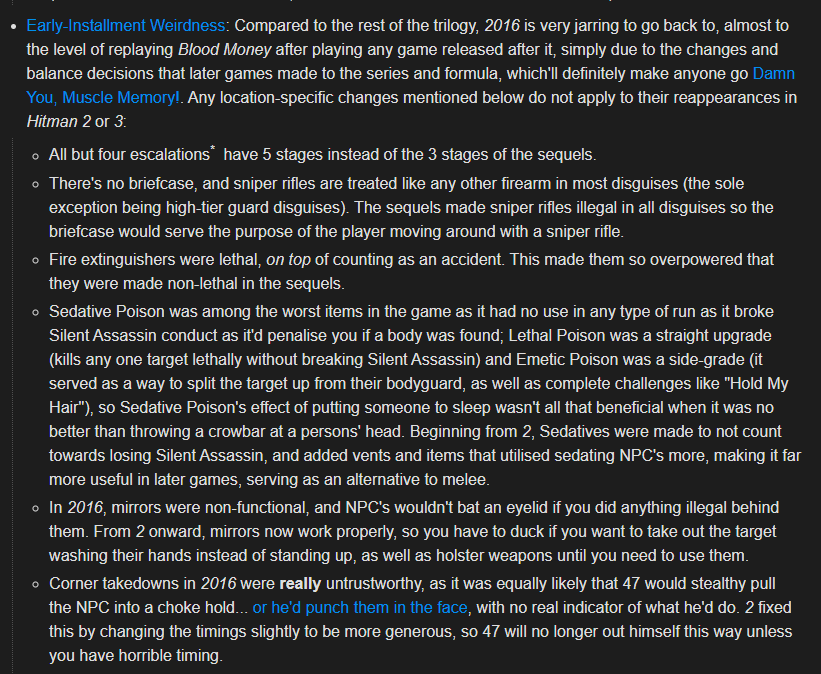 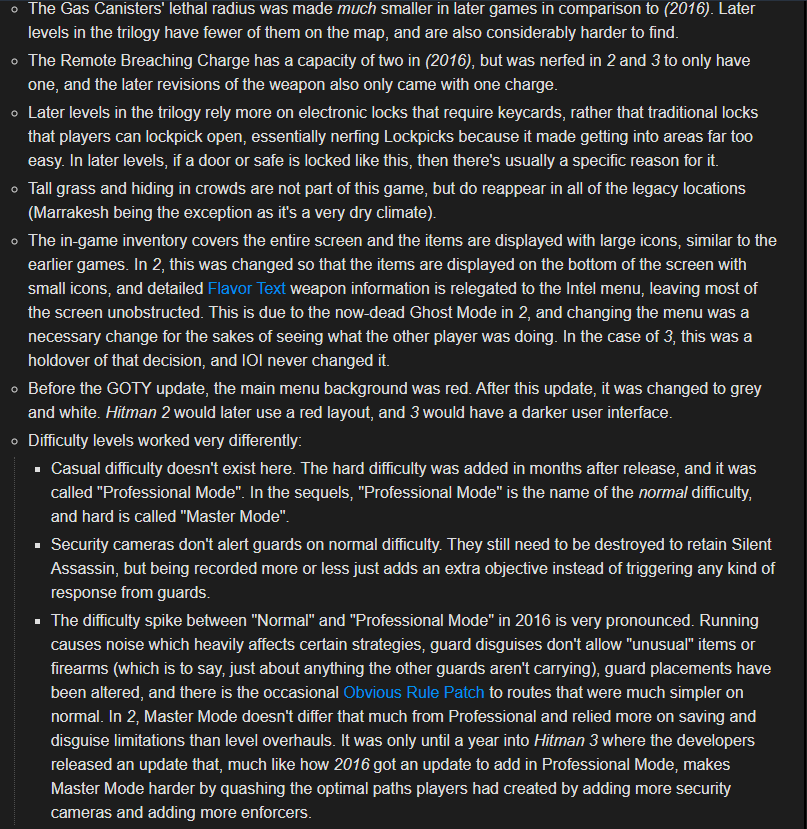 Also, removing those games purely and simply from the stores would mean hiding behind so much years of work and evolution, like nothing happened. There’s even people to this day who have never heard of HITMAN (2016) while it remains one of the greatests of them all even to this day: polish, cinematics, animations, etc. ! 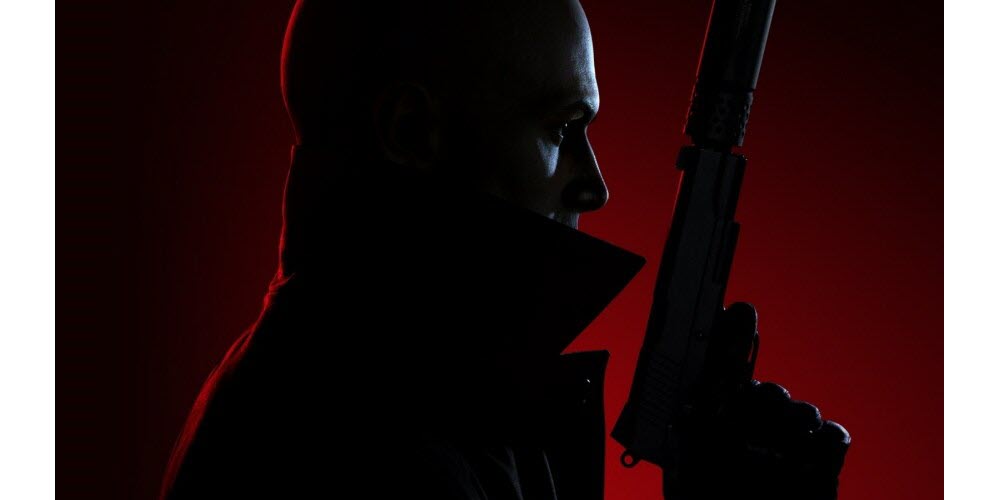 1000×500 17.4 KB
HITMAN 3 is probably a good sequel, but let’s not forget what we’ve all started with, and i think the gap and differences between the first, the second and the last are big enough to keep them all available to play and purchase, even for the years to come

Thank you guys for reading me (and caring).

We’re one step closer to perfecting the HITMAN experience anyway.

Wishing the best to developers still working on that beloved franchise.

Merged to the relevant section