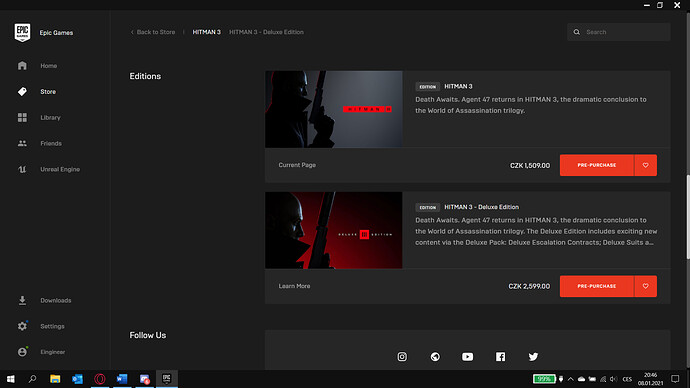 I saw someone in official Hitman 3 server complaining that in India it also suddenly increased in price. Is it even legal to change price after it was firmly established?

Do I get my few dollars back, Epic?

I noticed from North America it was at $90.00, 10 USD more than the Deluxe edition on either console. Seems like it changed lots of places…

Changed in Japan as well. Two three days ago it was a little over 9,000 JPY (don´t recall the exact price), now it´s 10,500… But somehow I have a feeling the deluxe price was actually higher initially and then dropped…

Ah sod it, I´m just gonna get the basic edition then

Maybe it was some type of preorder discount that expired? In the US on the PSN store the Deluxe Edition preorder was on sale. Discounted to $72 from the regular price of $80. Maybe a similar thing where there was a temporary sale to incentivize preorders that expired.

Entirely possible. But if that was the case, it would´ve been nice to inform it is a discount and when does it end. Now they´ve only deincenitivized me to preorder (the DE)

PSN had that information available…the sale price marked distinctly as a sale with the regular price also visible and they mark the expiration dates and times on all their sales…though I didn’t look at what it was precisely at the time as I just preordered.

Maybe it’s an issue with the Epic store not clearly providing all that information as they should rather than the fault of iOi.

Anyone who orders the Deluxe Edition off the bat rather than getting the Standard Edition at launch and then waiting for a sale later in 2021 to pick up the Standard-to-Deluxe Upgrade Pack has got more money than sense!

The Deluxe Edition stuff looks cool, but it’s nowhere near worth the current premium over the Standard Edition, especially if it has now gone up in price. Wait for a sale, peeps!

With the discount the deluxe cost me only $12 more over the regular edition…hardly the end of the world. If the upgrade releases later for $10 I will hardly feel bad about paying $2 more to not wait six months or whatever.

Is it even legal to change price after it was firmly established?

Of course, it only wouldn’t if they’d charge you the difference if you bought it already.

Yeah, pretty much my reasoning

I´m basically just waiting if IO drops some info about the deluxe content (i.e. items) that would make me unable to wait a year for it on Steam, where I actually want it

PSN had that information available

Ah, ok. Since I´m on PC only, I naturally didn´t check that one at all.

Maybe it’s an issue with the Epic store not clearly providing all that information as they should rather than the fault of iOi.

And it is indeed Epic at whom I was pointing

If I have to guess, and considering Epic were not the only stores affected, I’d bet more on the economy suffering jacking up the prices. But that’s a theory. Don’t get me wrong, these prices should not have changed, but here we are.

It’s more likely the boring reason: IOI made the decision to put it on sale on PSN for pre-orders, not Epic. IOI decides the price; not the store. Blaming Epic (or Microsoft or Nintendo, for that matter) for IOI giving one store some information the others did not know about is a little dumb. This is communication breakdown, nothing more.

Not really, deluxe edition was only like +12 €, which really isn’t groundbreaking.

No, it was almost certainly a sale that wasn’t properly marked by the Epic store…the price before and after a hike coincided with the identical price change on PSN where it was properly marked as a timed sale. It was temporarily on sale for $72 from the regular price of $80 and now that sale has ended, hence the price increase. But it seems that Epic just changed the price back and forth without properly marking it as a sale.

No, it was almost certainly a sale that wasn’t properly marked by the Epic store

What about the other stores? Were they marked as “on sale” prior this hike; heck, have they price hiked?

Just checked the Microsoft store, and the price of standard also went up (by £2.49), but deluxe remains at it’s original price. I can’t find Nintendo’s price for H3 (cloud version cannot be purchased atm), and I distinctly remember Microsoft not offering it on sale either. This is IOI’s doing, and a communication breakdown, little to do with Epic.

No idea…I know of the PSN store which is where I bought the game at and I know of the Epic store from what people describe here. Not sure how the Xbox store displayed it or what other PC stores it may be on.

See my above comment; I’ve edited it with more details. Microsoft hasn’t changed their prices for deluxe; and it was never offered on sale on mikes store, ergo, my original boring answer still stands.

Still though, the prices are all over the place!