AI behavior in Contracts too inconsistent

I will cite two specific Featured Contracts: I’m Burning Up, Doc and Houdini’s Great Escape. These contracts are uncompletable. Every time I try to bait the target outside in I’m Burning Up, Doc with a pistol drop (as I’ve seen done in countless videos), instead of the target following me outside (like he does in every video) he will predictably and consistently react in one of two ways: either he will compromise me, or he’ll walk outside and tell a guard he found a weapon. Regardless of how I place it, or how quick I pick it up and conceal it, it’s one of these two reactions.

The drowning target in Houdini’s Great Escape always goes to the bathroom in the Shiek’s hotel room, and never to the downstairs bathroom near the final target, as he does in every video I’ve seen in the Contract.

I bring these two contracts up specifically because both are time limited and with these changes in target behavior, they cannot be completed within the time constraints.

Yes, Houdini at least has been a discussion over on this thread

Since there isn’t a combined thread with HITMAN 3 and legacy Featured Contracts I thought it’d be a good idea to make a separate thread to post runs. Mods feel free to nuke this if it clutters the forum. I love Featured Contracts and like that I get a chance to do all the legacy ones over again without the ET phone this time. Some are much more difficult to speedrun

That being said, I still complete them and try for SA. I did I’m Burning Up Doc with the weapon lure so I’m not sure what the issue is. If you want I’ll capture a run and you can compare it to what you did?

Houdini’s Great Escape is pure cancer. I hate it so much that I tried it for hours only to finally complete it 8 seconds over the limit. Hard pass on that one again due to the bathroom choices of the guard.

I even tried to throw the emetic device, wait for him to go all the way down to the basement to stow it, then triggered it… he went to a trash can in front of NPCs

I have, on one or two out of however many times I restarted over a period of an hour and a half gotten him to follow me out there, only for something else to go wrong, be it the gardener not moving fast enough, or a guard with X-ray vision.

I’ve watched videos of the run, I’m not sure why he so rarely delivers the desired result, but I’ll try it later. I’m trying to have fun, not frustration.

Agreed. I like about 60-70% of FCs. The rest are tedious or straight garbage.

Here is how I do the weapon lure on the surgeon Here’s the video by the current #1 on the PS leaderboards for Houdini’s Great Escape: 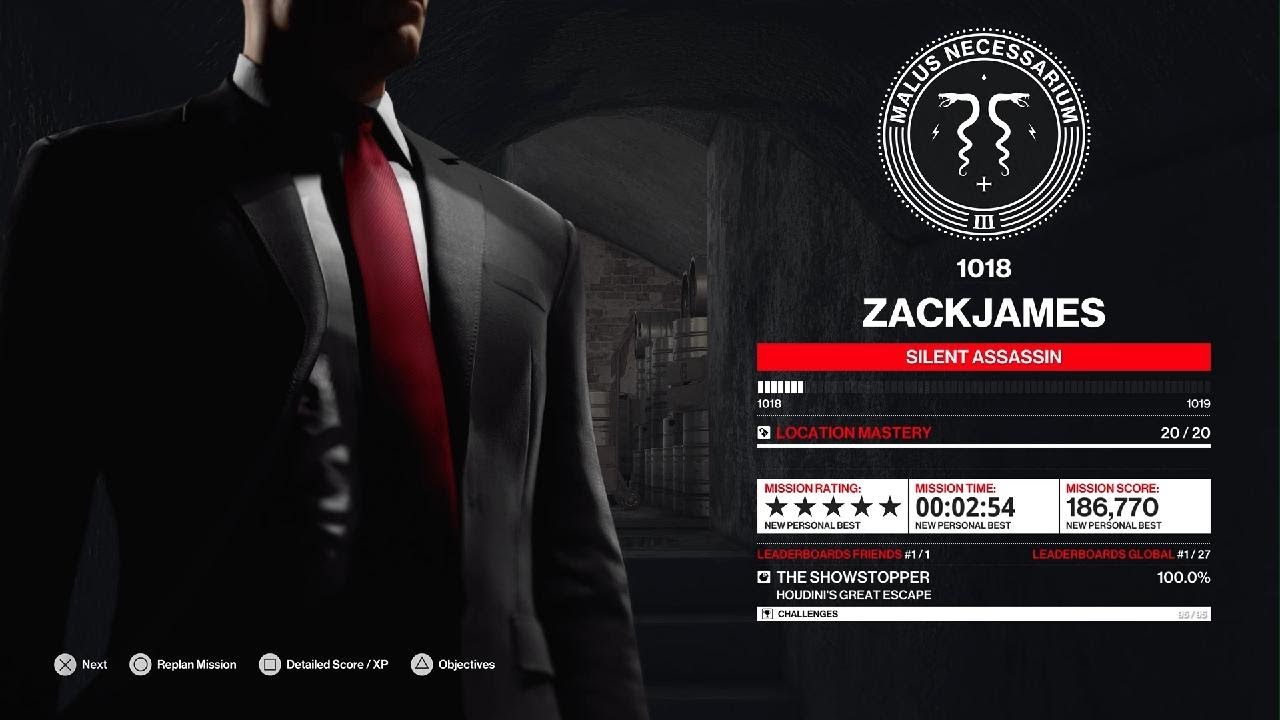 I’ve managed to replicate it with a slightly slower but still sub 3:00 time and if I can do it, anyone can.

I did Schizophrenia last night, that was a good time. I did it after maybe 20 attempts in 22 minutes. I can do it much shorter but the RNG is really odd in Hokkaido and HITMAN in general. Spotting you through floors etc.

I captured my run but probably won’t upload it. I had to take my time with the Director and I even forgot to have his tranq’d body found so he can continue his routine to be poisoned by the baseball player.

If it wasn’t one of my favorite maps I’d hate Schizophrenia.

Thanks for that. I was able to finish I’m Burning Up, Doc. This method is helping with Houdini’s Great Escape, I just need to trim some fat to get my time under 3 minutes.