Any levels where you dislike the mission but love the map?

For WOA, I would say Marrakech. I love the bazaar but I dislike the school.

Whittleton Creek, Vermont. The mission is mostly ruined by the clues but I’m a sucker for the suburbs.

Tracking Hayamoto. A fairly dull mission with limited approaches and ultra-paranoid guards, but I just love the setting: a swanky Japanese mansion and its grounds on a stormy night. Mmm.

I think the map itself could work in a less guarded setting, maybe with more crowds and a lighting change to make it seem fresh? The current one in my opinion isn’t very fun to replay and I personally don’t like the sky.

Sapienza, the map works so much better in contracts mode than it does in the main mission by a country mile

Same with Chongqing, I’d love this level if it weren’t for the facility and the overall Story, I’d rather kill some Triad Mobsters or something.

It looks and feels amazing still.

World of Tomorrow and Another Life because of the virus and clues.

Marrakesh. I don’t care for the school and it’s very easy to misstep and walk face first into an enforcer around the corner. Plus Zaydan’s whole story feels a bit basic. He’s still evil, but not evil in an interesting way like Silvio Caruso or Dalia Margolis are. Map wise, I do like that at the consulate you can walk in some places openly in your suit with no issues. 47 looks like a business man there and it’s a good example of social stealth in Hitman. Also, it’s prettier at night. 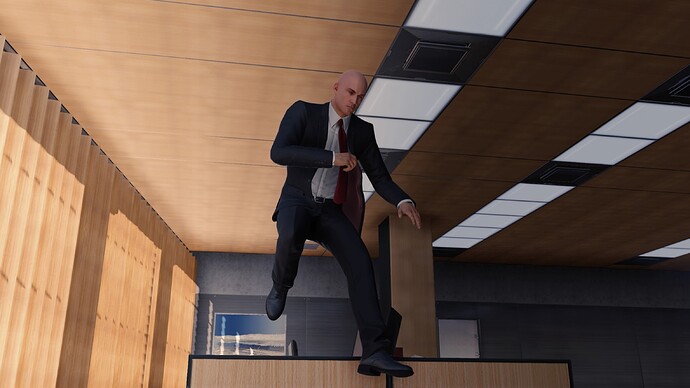 It’s fun when some NPCs are unaware of 47 trespassing. It’s great when the enforcers make sence, it makes the levels feel more authentic and less like deliberate setups and just a puzzle game.

I wish there was a pass to enter the consulate without trespassing. Agent 47 doesn’t look conspicuous at all with the other men wearing suits.

I completely agree. I always found killing Reza Zaydan to be such a bore. He isn’t a really interesting target. I always just poison his food to skip going to the school.

I loved the opening level in Absolution. Hate what we were there to do obviously but it’s just so telling that her idea of a hideout is a gorgeous mansion with floor to ceiling windows.

Actually, come to think of it, almost every time we see Diana alone she’s standing in front of a window of some kind. That woman fears no sniper lol

I could imagine that those Mansion Windows were bulletproof or something

I heavily dislike ‘A Glided Cage’, the mission falls flat in the abandoned school. Which is why ‘A House built on Sand’ is a much more enjoyable mission, it places the the objective in the most interesting area of the level. It’s easily one of my favourite mission in this trilogy and sadly it’s only a bonus mission.

The same can be said about Chongqing, I don’t hate the mission. However a lot of the appeal for me lines in the city blocks and narrow streets and once again the targets are lifted from this world and placed in each of their own fortresses. I like the I.C.A facility it’s a nice contrast to the neon lit world above. However taking care of Hush is rather underwhelming due this rundown apartment block.

Also ‘St. Petersburg Stakeout’, is a rather annoying map, due to the mission it’s rather hard to move around. However ‘St. Petersburg Revisited’ changes the mission structure for the better, it’s a lot better use of the map and it’s a nice surprised that Mr.17 is lurking in the area.

The map looks absolutely gorgeous.I love the colour of the sky because the orange shades look so nice above the sea and the architecture of the hospital is beautiful as well.
However,the target is vey disappointing.Killing the cult leader during the operation with the lights off is a really cool idea,but there aren’t any other (reasonable) ways to kill him unfortunately.They could have at least offered an opportunity to shoot him from the ventilation shaft,beacuse they are a nice addition to the map’s structure.(It is actually possible to do so,but it’s very difficult with a pistol and unreasonable with a sniper rifle.

)
It is also a real shame that all of the map’s potential was wasted on a single static target in the basement,while the rest of the hospital isn’t used a lot despite having such a great design.
There are a lot of staircases connecting the floors,a lot of open windows to enter different rooms,there is access to the roof etc.
Just imagine how awesome another target roaming around the ground floor and/or the first floor of the hospital would have been,similar to The Meat King’s Party where there is a static target in a protected area and another target moving around public areas.

Fixed for you ;). But I agree, for me, it feels like the Map with most wasted potential for multiple reasons with most notable being the fact that the City is way too small and barely anything can be entered, also it naturally feels really dead to me to do the fact that it’s full of Clones and while the even more clone heavy Mendoza atleast makes up for it with a good mission and good usage of it’s Mission Area, theres Nothing like this for Chongqing. Both Targets are in isolated Areas away from the City and especially the start at the Longwalkway is terrible.

Not only because it already shows me atleast three out of Bounce Places I wish I could enter (via Normal means,) it also isen’t reachable from the other side which is also one of the biggest issuses with Santa Fortuna,so credit given where credit is do, if you know the layout of it and can unlock Doors, the Deadends aren’t necessarily that. I don’t get why the Train Station wasn’t just made accessible with a small walkway to the City in it.

For me it’s Colorado. I liked the many targets and always hostile map, but I really thought the idea that each area could only be accessed by the appropriate costume seemed a bit contrived. I could have bought into it for one area, perhaps the bomb range. I also wished the cook had a usefulness to him and that there was a couple other ways to get multiple targets together.

Totally agree, except for the underground facility part. In my honest opinion, the facility is extremely dull and feels like a chore to navigate through, ONLY for me to then kill a totally flat and uninspiring target. Every level looks the same and the whole swiss-cheese design is blueballed by the nonsensical tier-x access toggles. It also makes no sense for a ICA facility to be only accesable via alleyways and freight containers.

Hush’s experiment complex is really interesting on paper, but complicated in practice. Overall design is nice (shady, ghastly) but a struggle to play through with all the narrow hallways and awkwardly placed enforcers. Would this be a bigger building in a less cramped area it could definitely be miles better. The aesthetic is what made me fall in love, but the awkward navigation ruined that immediatly.

I agree with what @MrOchoa said: killing a triad gang boss would’ve been more interesting, but only if the city wasn’t so cramped and awkwardly designed. The streets themselfs are awesome but there is simply too little to be found. That also includes the apartment block. Maybe its my expectations to blame when I first watched the Chongqing reveal trailer (in which IOI mostly showed the city area) and I immediatly got HM:C flashbacks. Maybe it’s IO’s poor choice of level design in this map. Maybe it’s both. To be completely frank, this map in general is not my favorite and I doubt IO could do a lot with it without it feeling too much like a special assignment.

IO could do a lot with it without it feeling too much like a special assignment .

I wouldn’t say that. The Icon also uses a very small Area of Sapi. Yes, it’s not a very good Mission, but it defenitly doesn’t feel like a Special Assigment + there are a few very cool NPC Models that make very good Contract Mode Targets.

Threads like this remember myself on how special hitman is. Or do you know any other game where you can say “Well the mission isnt good, but the map is nice”? In non-open world games of course

EDIT: Also that there is other content that can be better, in Hitman its ETs, Bonus Missions, stuff like that. I don’t know any other game that has so much “side content” next to the big main plot that, in some cases, is even better than the main game.