Are you still planning on buying Hitman 3 on Steam in 2022?

Simple thread, since I think Hitman 3 is basically a dead game which will be full price on Steam, I’d like to know if people who were planning to buy it on Steam in 2022 instead of buying it on the EGS will still want to.
EGS = Epic Game Store

I will buy the game on Steam despite I have it on Epic.
Because I want all games on one platform, because I’m not against doing all challenges again, and because Family Sharing. Epic doesn’t have the feature

I wouldn’t call H3 dead with it’s steam release in early 2022. The 7 Deadly sins have just wrapped, yet the game will still receive ongoing content in form of Elusive Target and other live content. IO have confirmed that people are still working on H3 and Travis IO’s Community Manager on Twitter hinted for exciting news after The 7 Deadly sins. 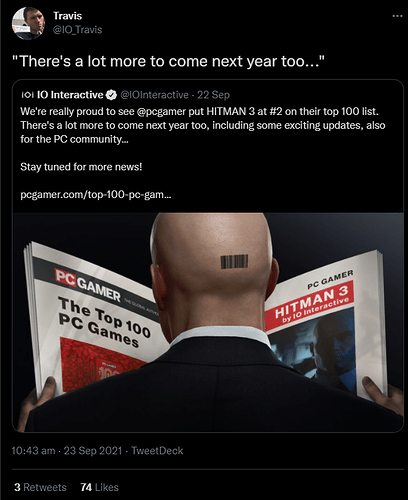 I wouldn’t write off the game just yet.

Well it’s hard to trust them when currently the only good things in roadmaps are h3 elusive targets. Compared to hitman 2 at the same time (so 10 months) it had a lot more content and the deluxe DLC was actually worth it. I mean let me see what’s inside the h3 deluxe DLC oh yes nothing.

Well it’s hard to trust them when currently the only good things in roadmaps are h3 elusive targets.

Why? have they broken any kind of trust regarding promising content that was never released.

Compared to hitman 2 at the same time (so 10 months) it had a lot more content and the deluxe DLC was actually worth it.

Compared to H2, H3 is a complete product that didn’t need to cut content and release it at a later date due to financial trouble and the messy situation IO was in after the break with Square-Enix. Yes the Delux edition is lacklustre, yet we all had the information we need to make an informed purchase. The post launch content of H3 might not be everyone’s cup of tea, but that doesn’t mean that IO can’t raise the bar from The 7 Deadly Sins.

Saying the game is dead, is simply just choosing to ignore that IO is still working on new content due to not liking the current post release content. We can only hope that whatever they are working on is exciting and will raise the bar from the current offerings.

I voted for not buying it on Steam because I already have it on Epic, but that comes with the caveat that if they come out with some sort of “game of the year” version with bonus content that is somehow not available on the Epic version or enabled VR support for Steam only, I would have to consider it.

I don’t care about the “all in one place” argument because I already have everything “in one place”…in Hitman 3. I don’t care what storefront the game was bought through. I click an icon on my desktop to open the game and don’t have to interact with the storefront at all.

I was very satisfied with the content that came out for Hitman 3 over the last year. Between the deluxe escalation, unlocks, 7 deadly sins DLC and the Elusive Targets, I have no complaints.

I assume that whatever the do for the game through Steam they’ll do through Epic too (unless they can’t because Epic doesn’t support it) so there’s no reason to get the game twice barring extra content.

Not a smart decision but I’m going to buy the game again once it has been released on Steam. The only reason I’ve the Epic launcher installed is because of Hitman 3. Once Hitman 3 is on Steam it means Byebye Epic. Don’t really want to have twenty different launchers installed on my PC. Personally, I would rather not have a launcher installed at all, but sadly that’s not possible nowadays unless you want to use not-so-legal methods.

I miss then time when you could just buy a game, put the CD/DVD into your PC, install it and play without having to create an account somewhere.

Bit of an exaggeration, no?

I miss then time when you could just buy a game, put the CD/DVD into your PC, install it and play without having to create an account somewhere.

I don’t think this mentality has been true post-2007 and the launch of GFWL and Steam during that time period. And back then, Steam was very much a DRM system for the Half Life games.

I remember those times too. The fact I have to get up, get a disk from my shelf, and put it in each time I wanna play something (remember, not all games could be directly installed; many could, but not all). It’s hassle i’d rather leave behind. Account-based systems is where PC Gaming was always going to end up, simply for pure practicality purposes. I don’t think the physical effort of finding the right box or DVD equates to clicking a separate launcher button, or a desktop shortcut to the game, because you wanted to play a game not on [insert launcher here].

The last physical game I got for PC was Overwatch (it was cheaper than digital during a sale, so sue me), and that was literally a verification code on the disk and an installer. Pretty box tho,

I was always gonna buy for launch, which meant EGS, and I am against the idea of buying the same game twice

I’ll eventually buy it on Steam, but I’ll wait till it’s on steep sale. I have the free starter pack on EGS, but haven’t played it much. I get the worst screen flickering whenever I do, and I’m not sure it that’s just my computer or something about H3, since H2/2016 run fine.

IO have confirmed that people are still working on H3 and Travis IO’s Community Manager on Twitter hinted for exciting news after The 7 Deadly sins.

7DS was while polarizing and it ultimately divided a lot of people opinions throughout is seven part sudo campaign when you factor in the success of the base game we are atleast a year out before we can start checking out with this trilogy.

I’m expecting some hopefully non escalation content personally, but that’s cause I want more variety when it comes to mission types. Some bonus missions will be nice that’s all I’m saying.

i agree with you there

Not sure why the last option is marked as an optional choice, though I won’t buy the Game again. I mean I only got EGS for Hitman 3, hell even my login Password contains Hitman 3 in it, though aside from the Progress Carryover, it’s not like I have Steam for everything else. Got RDR2 on Rockstar Game Launcher for some reason and in a way also Mafia: DE since they apparently have there own Launcher now aswell, so I still open it for Steam. (What’s with all that Launchers anyway?)

Similarly to Pitman, I got EGS purely because of H3 (cause I knew I wouldn´t be able to make it for a year without spoiling things for myself). I will buy it again on Steam, both because I prefer to stick to Steam/GOG as my main launchers whenever possible, because EGS is pretty annoying/clunky to use, and because I don´t have a problem with buying the same game twice if it´s a game I know I will enjoy and sink hundreds of hours into (and give some more support to the devs).

But just like Kevin_Rudd, I am hoping my Steam entitlements (legacy stuff and stuff like the travel briefcase which I miss dearly) will cary over to that version.

Mafia: DE since they apparently have there own Launcher now aswell

I have yet to buy M:DE, but apparently running it with that launcher (i.e. by launching it from your Steam library) significantly affects your PC´s performance?

(What’s with all that Launchers anyway?)

Will definitely buy it on Steam. Luckily Hitman got a great release on Stadia so that I could play it on my PC on day 1 without Epic getting anything from me, still I want to complete my collection and also send the message to iO that even players with 500+ hours of H1 and H2 will wait for the Steam release

I’m in a similar position. Played H1-H2 on Steam and got to 100% completion across everything there, but played HITMAN 3 at launch on Stadia (decision forced on me by my gaming PC being dead at the time, but might have done this anyway to avoid EGS) so had to start fresh with no progress carry-over.

I’m really looking forward to the Steam release next year so that I can finally buy HITMAN 3 on PC, transfer all my hard-won progress from H1-H2 over (that Arctic sniper rifle was only ever getting unlocked once, no way I’d be repeating that on Stadia!), and then work my way through 100%-ing H3 with the intention to have fully done everything the WoA trilogy has to offer across all 3 games.

EDIT - the other thing I’m really looking forward to is finally having Ansel back in my life again and taking some sweet, sweet custom screenshots across the entire trilogy. As excited about that aspect as anything else, TBH.

7DS was while polarizing and it ultimately divided a lot of people opinions throughout is seven part sudo campaign when you factor in the success of the base game we are atleast a year out before we can start checking out with this trilogy.

Many people have high expectations about new maps or bonus missions but have unrealistic deadlines. If the level of detail and quality of the maps are what they are, it is because a dedicated track team takes a whole year to make a single level like Dubai. And that’s why IO didn’t plan any new maps at the beginning to focus on new projects, but the success of the third game and the fans’ expectations changed some plans.

It’s great that people gave their opinion because IO probably wouldn’t have changed their decision. Still, things take time, especially when the agenda has changed. Now I wonder how this will translate into the current business model.

Not sure why the last option is marked as an optional choice,

Well simply because the poll is not about people who bought the game on the EGS and not on Steam (so the normal PC community) but i still wanted to put it because maybe people would vote an other choice because theirs isn’t in the poll. This choice is optional because I know that even with the controversy about the EGS, a lot of people still bought the game on it.

Have it on Epic but depending on if can port progress over (even if just on Steam Hitman 2 to Hitman 3) I would likely get it again as prefer to have it all on one launcher then split between on Steam and Epic.

Only use EPIC for Hitman 3 really…

I originally intended to buy H3 on EGS. But because progress carry-over is one-time-only and it is unclear whether there will be a cross-progression feature, I decided to wait for it to be released on my preferred storefront(Steam). In the meantime, I decided to play it on Xbox, which runs games better than my laptop anyway.