The Artbook and OST should be available now on account.ioi.dk (make sure to boot up H3 beforehand)

So let’s talk about it

Its not showed up for me yet, Ill have to check again later

Edit: just to clarify I know the artbook isn’t in-game I just rebooted the game to see if that would unlock the artbook over on the ioi account website (it did not)

have you tried refreshing your IOI account from the settings

Cake as soon as they went up I can finally connect again is this a coincidence? 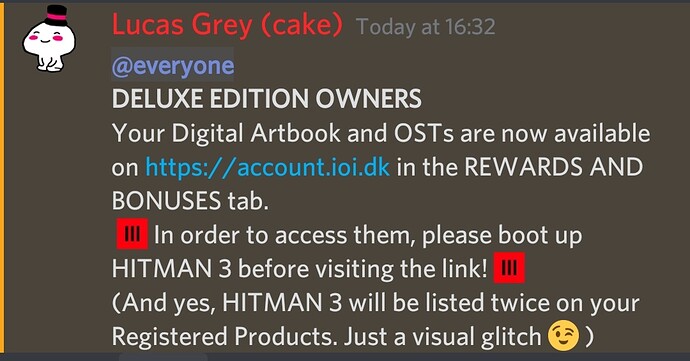 Alright, thanks. I’ll be listening to the sweet OSTs now

Okay I just checked the website after starting H3 on my PS4. The only things on the Rewards section are the Anniversary Suits Pack and Issue #1 of that awful comic book, both of which I have already claimed. I hope these deluxe items become available on my end soon.

the tracklist for the H3 OST:

ah, its only for PC users for now

Yep, Xbox user and still nothing. Ugh. Come one, we paid for this stuff!

I wonder if Nielsen stepped out of his comfort zone by composing electro music.

It didn’t show up for me to begin with, but a quick refresh inside H3 did the trick.

So far so good!

Surprised about the omission of The Marketplace music from Hitman 1 but that’s no big deal as I already have it in delicious flac quality in my HITMAN download folder anyway. Saying that the 2016 theme easily makes up for it, what an absolute delight.

Only listened to a few so far but Club Hoelle is great and I can’t wait to listen to Sgail and China’s soundtrack.