A revival of the title with the same name from the old forum. I’d like to start the conversation by asking two questions:

Is the next Battle Pass going to be based solely on Black Ops: Cold War?

As of next Thursday we will be in mid season of the first season for Cold War.

What are your expectations for the new Battle Pass? This includes operators, new weapons, the story, etc.

Operator? Will most likely introduce someone from the Story either Mason or Hudson.

Weapons, We are bound to see things such as the Ballistic Knife, Riot Shield, Galil eventually.

Story? Well it’s gonna loosely connected and lead into the big Warzone event that is coming in March with the new map. It will currently be filled til around Mid Season 2 at best.

As for Items, Unlocks, and skins. The Game Fuel Skin will be released for people who earned it. I expect some additions to the Music Player. Plenty of filler content and Tokens. Oh yea and another Anime Pack.

115 Day is coming soon so heads up on that front.

I know this, I just asked if it’s confirmed that the next Battle Pass will be based on Cold War. As in, if it’ll continue Cold War’s expanded story introduced in this Pass instead of the one from the previous six, which expanded upon Modern Warfare 2019’s story.

Isn’t the riot shield is already in the game? I use it with the knife and the dual kodachis, so I know it’s already there.

The Game Fuel Skin will be released for people who earned it.

I can’t believe this is real… but well, at the same time I’m not surprised. It is COD, after all.

Oh yea and another Anime Pack.

For some reason, they seem obligatory in Warzone, but I don’t really dislike them. The last one released (the one with the purple tracers) is the best one yet… and the only good one out of all of them

I just asked if it’s confirmed that the next Battle Pass will be based on Cold War.

Cold Wars story will continue for the next 5 seasons after Season One.

Isn’t the riot shield is already in the game?

The Modern Warfare Riot shield is in Warzone. Cold War doesn’t have one yet.

I bought it and enjoy using them in Zombies.

Cold Wars story will continue for the next 5 seasons after Season One.

Cold War doesn’t have one yet.

Honestly, I think it’d be a bad move to make it unlockable in a Battle pass. Plus with how the Cold War weapons work, I don’t think the shield would improve the gameplay. But still, I’m only saying this after using the weapons in Warzone, since I have no plans to buy the full game.

I bought it and enjoy using them in Zombies.

I’m glad you enjoy Zombies… but can you tell me what you consider its appeal is? I’ve never been interested in it.

Honestly, I think it’d be a bad move to make it unlockable in a Battle pass.

It will most likely be a challenge unlock.

can you tell me what you consider its appeal is?

Horde based PVE, you don’t need to sweat or worry about SBMM. Easter Eggs are satisfying to pull off, it’s a relaxing game mode to play with friends.

It also depends on which iteration of Zombies you play.

Black Ops 4 is objectively the worst one.

Black Ops 4 is objectively the worst one.

Blackout and Multiplayer had more Zombies Content in Black Ops 4. The general sentiment among the Zombies Community is this.

they had released zc2 it would have been the best

Except the only proof of ZC2 existing is pre existing assets in Blackout and Multiplayer with the “dude trust me it’s real” mentality from sources. If I remember ZC1 was leaked in Stores along with files of it being found in game during playlist updates for BO3 on the server end.

The Zombies Community wants more consistent updates has some form of Quality to it. These one of game modes such as Jingle Hells and Cranked are mirroring BO4 with its game modes outside of normal survival.

I did a poll on the Zombies Sub Reddit about which Gamemode they want in Cold War and the vast majority voted for Grief a 4V4 mode that hasn’t appeared since BO2.

The developers need to listen to the community from time to time instead of throwing stuff at the wall and hoping it sticks.

Focused on quantity over quality.

maybe this is true but i dont think die maschine is that much better than the bo4 launch maps to justify the lack of content cw zombies is suffering from rn. at this point in bo4’s life cycle we had 5 maps

Forced a new continuity that was controversial, half baked and unresolved while the Aether Storyline was shoved to the side.

I agree that chaos was unresolved but only because aether should have been finished with bo3, but they couldnt let it go. chaos was honestly great and had lots of potential that its a shame treyarch were too afraid to continue with it.

Support was lackluster with factions being promised, but scrapped this was due to Blackout being prioritized.

this is true and it was a bit of a pisstake that zombies didnt have battle pass progression outside of the dailies. but i dont think cw zombies support is really a marked improvement

Overhauled Perk/Point systems which was controversial and still resulted in the same problem of people using the same perks.

i dont mind the new perk system as much as other people but the perks should have been more balanced. points wise the system was honestly not a bad change but it did kind of take away from the tradition of milking for points - still miles better than cw’s system

The only high round strategy is the Helion Salvo a RPG. This is because all weapons damage except especially PaP become obsolete after a certain point except for the weapon mentioned above.

Last original map in terms of Aether was Gorod Krovi ever since then its been all remakes.

kind of true but if alpha omega is guilty of this then so is die maschine. its all just nostalgia bait really

Path of Sorrows was the norm field upgrade. Because nothing compared to it.

One off game modes that are fun the first time around. This still continues with Cold War.

idk rush was always good for daily challenges and i played a lot of gauntlet. 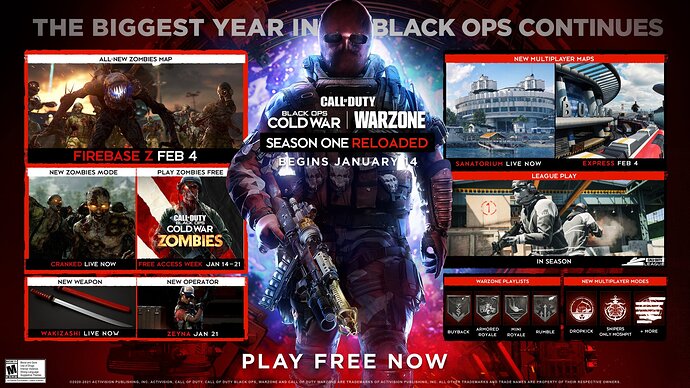 The newest Zombies adventure is launching in Season One, free for all players.

Is anyone else having issues picking up your loadouts in Rebirth Island? Every time I buy a Care Package from the store near the house that’s on the southeast end of the prison, I get taken to the main menu and I can’t continue further. According to my friends, during this period where I’m in the menu I can still control my character, and they recorded it as proof.
Anyway, after some time, I get a pop-up that just says “DEV ERROR 5573” and that’s it. I can play Warzone again, but it’s only a matter of time before it kicks me out again. It even happened to me while in Verdansk right after I got a kill.
Also, I still can’t make progress on the Operator challenges for Cold War operators. I’ve won countless Gulag matches, ran over around 20 people and called I don’t know how many UAVs, but my progress never counts. With MW operators, however, I can still complete their challenges. 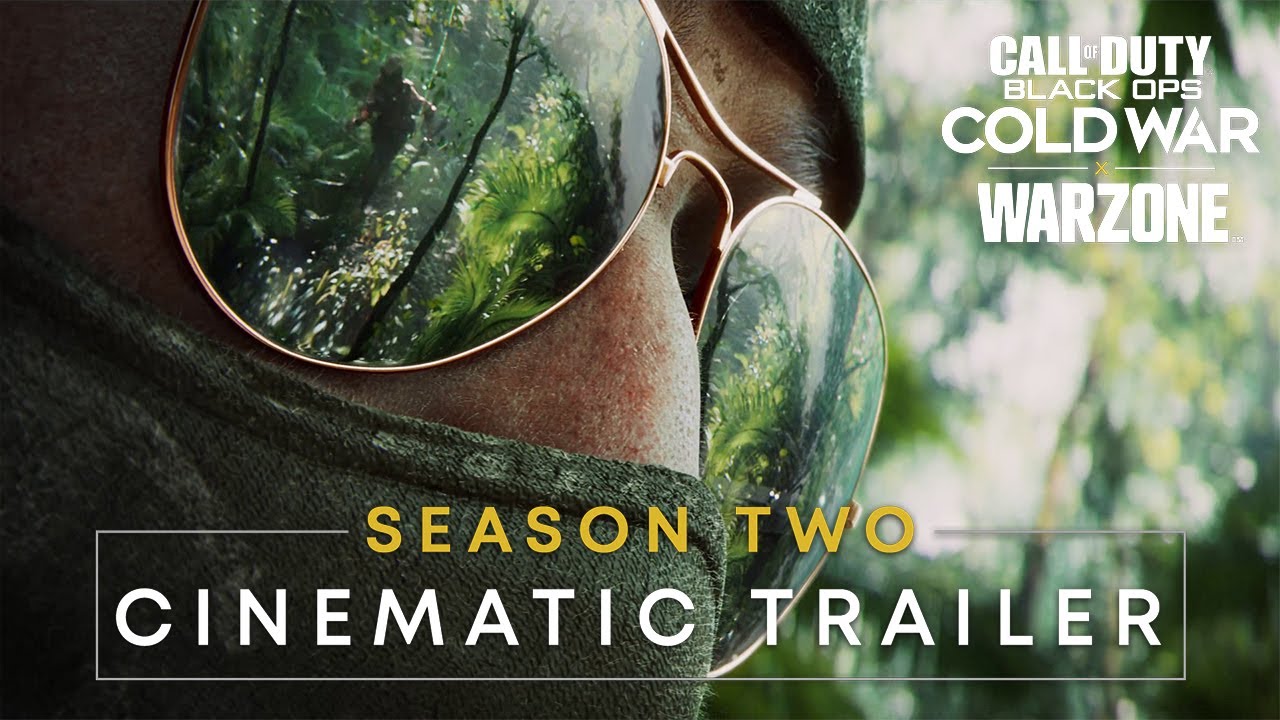 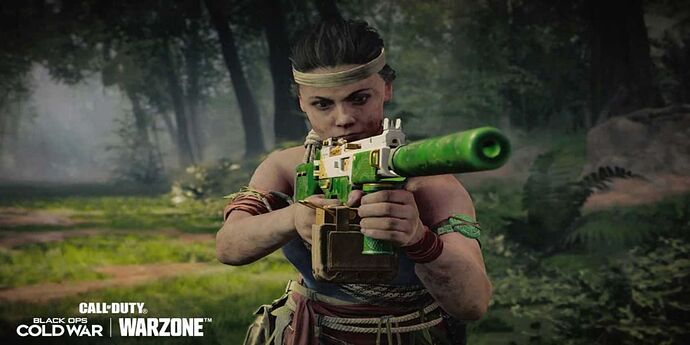 Call of Duty: Warzone’s Season 2 update draws more criticism, with Dr. Disrespect being the latest person to take issue with the changes.

tbh i have little sympathy for warzone players cuz this dumbass mode is taking so many resources from the base game. i hate that treyarch insist on pushing warzone as a 3rd mode when it isnt even the same game

Yea they are certainly very different the way they play.

I would love either a mini battle royal on a smaller map (but still bigger than normal black ops) or a giant team death match on the war zone map with no respawns. Just go play and see how it finishes. You could have the gas approach from behind each teams lines so they continuously had to go towards the enemy (that would keep it fast).

i wouldn’t even mind warzone that much if the gunplay was even remotely similar to cold war. i skipped modern warfare for a reason, i resent that they’re still pushing it without doing even the bare minimum in making it feel more like cold war

My Call of Duty guy has some imagination huh? 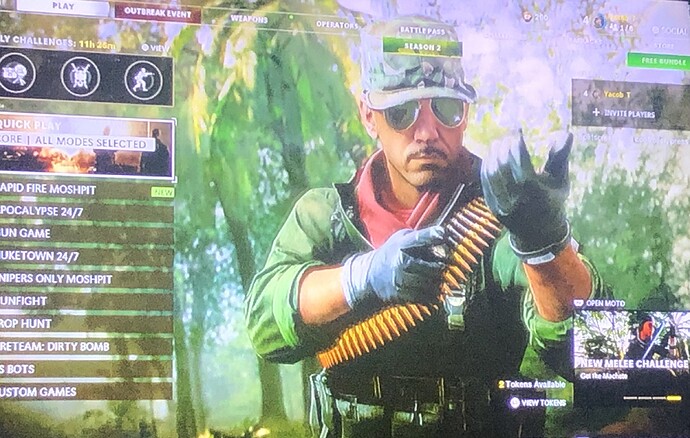 My Call Of Duty girl is just chilling with my Dark Aether shotty. 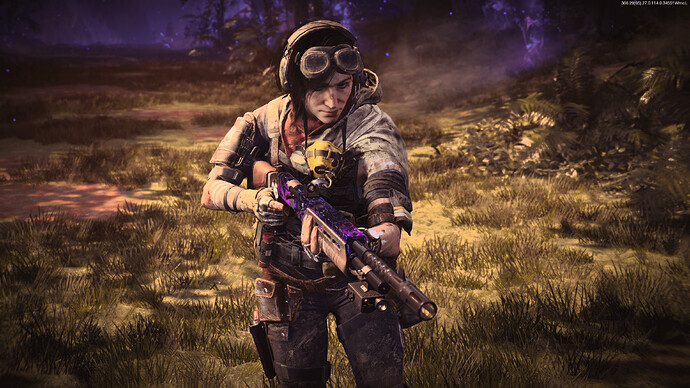 is she actually any good? as a big zombies player i feel like i have to get her, but the bundle is shite and quite expensive

I bought the bundle basically half off because I had free cod points that I saved up.

Yes, but that is if you are a Zombies Fan.

No, the camo is uninspired and very minuscule for a reactive camo.

Personally yes, but that’s because it’s simple and has a battle worn like style to it.

I mean it’s all cosmetic so it’s entirely how you feel, I like the simplicity behind the execution, but that’s because you shoot the target I’m the leg and then promptly execute him.

It’s really all up to you, I got it and I’m happy with the operator, but that’s cause I’ve been playing the mode since it first debut back during World at War.