Things went a bit off topic when I shared my opinions on the games in Unpopular Opinions thread, decided to make a new one about it.

This is mine:
SA>H1>H3>H2>Absolution>Contracts>Codename47>Blood Money

Note that once you shared yours, you must have the ability to have its back, and explain your reasons if one asked.

@Heralds if you can move the posts from there to here.

Have you ever played Contracts to say something like that?

Or maybe infiltrated a second account with his moderation powers? 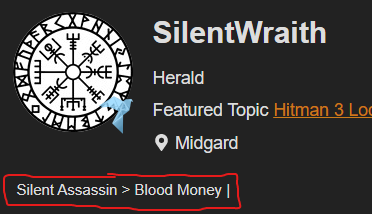 Are you high or something?

no no no. H3 doesn’t have the feeling.

Yeah but H3 doesn’t have Bangkok either

A new mad lad into the fold. 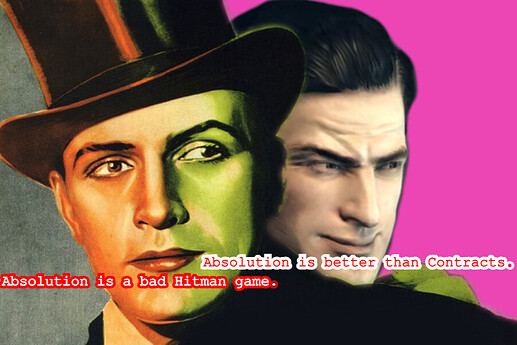 But I still like them and play 'em all

Absolution is better than Contracts mode in Absolution because it doesn’t work anymore.

because it doesn’t work anymore

And that’s the only reason, Absolution contracts back in the days was brilliant

I’m not gonna try to rank C47 - Contracts coz I haven’t played them enough to make an informed decision. But I terms of WoA:

Absolution has a ghost mode too. It’s a graveyard over there.

Freezer, please. The title says “keep it civilized”, you can’t just rip my heart out like that

6.Absolution
Gameplay?Awful.Atmosphere?Awful.Story?Awful.Overall?Awful.Do I need to say more?The only missions I truly care about in this game are King of Chinatown,Run for your life,Hunter and Hunted and Blackwater Park.The rest are meh or incredibly bad.
5.Silent Assassin
I love the atmosphere and the story.It also has some really iconic missions like Anathema or Invitation to a party.However,the AI is so paranoid that I don’t feel like replaying the game.I also don’t really like the slow pace in general(crouching is very very slow,using anesthetic too,not being allowed to run very often is annoying etc.) and it also doesn’t offer a lot of freedom in approach.I should also mention that even though it has some pretty high highs,it also has some pretty low lows.I can understand why others love it so much,but it is not my cup of tea.

4.Codename 47
Once again,great atmosphere and great story.Just like SA,it doesn’t really offer too much freedom of approach,but at least there aren’t missions I strongly dislike and it has a better AI than SA(even though it is more dumb,I preffer dumb AI to paranoid AI).It is also the game which helps us get so many great memes about @MrOchoa ,so bonus points for that.

3.Blood Money
It offers the best ammount of freedom of approach from the old hitman games.The AI can be manipulated in a lot of creative ways and the many new gameplay elements obviously were the first step towards the modern hitman games(distracting guards with mines,making guards pick up weapons to stash them,coins,accidents etc.),but this is also its biggest disadvantage for me.I am not really ok with NPCs chasing you across the whole map for tresspassing,getting shot while retaining SA,killing innocents without affecting the rating etc.Also,even though I think half of the game contains great levels(everything from Flatline to You better watch out+the Las Vegas levels),the other half is just meh.
2.Contracts
The thing almost everyone loves about this game is obviously the dark atmosphere and that’s definitely one aspect which makes Contracts be so high on my list.I also really like the way the story is presented and the loading screens are pure greatness.
However,it is pretty sad to see how underrated gameplay is in this game.The AI is forgiving(unlike SA),but it still offers a challenge(unlike Blood Money).There are also some ways to manipulate the AI which allows you to be more creative(but maybe others don’t really know about them) like distracting guards with silenced bullet shots(if you thought Absolution was the first one to introduce that then think twice,even though in Contracts they work in a more special way) or crouching makes guards(maybe civillians too,but I am not sure) come close to you.The rating system is also really flexible(because you are allowed for example to kill a non-target as long as it is not an innocent,to have one body found which makes public targets more fun to kill or to get spotted once) without makes things too easy(unlike Blood Money).This may also be just my personal opinion,but I feel like the infiltration options are more fun and better designed than in Blood Money and I also feel like there are more great missions in this game(I am going to post in the following days a more detailed post about this) and less meh ones,but it is fine if you don’t agree.Thanks for listening to my rambling about Contracts.

1.WOA triology
It has the best atmosphere,but most importantly it offers so much replayabilty and has different game modes which makes the game more fun to play(especially contracts mode).
As for ranking each game in the triology:H3>H2>H2016(imo the maps kept improving from game to game).
I don’t feel like giving more explanations at this point because it is pretty obvious why WOA is superior and the post is already too long.

As you can see im absolutely unbiased.

Before WOA came out the best stealth system in the series belonged to Contracts.

You get all the fun of running without being instantly killed and the AI is actually capable of realising the guy right up in their face doing weird stuff is probably suspicious.

There is nothing to discuss.

I was introduced to the world of Hitman in 2018, so I can’t really rate the previous games. I do own a few of them though. I just haven’t gotten around to play them.

I’ll ignore my fury of Absolution being so low

I am curious why you rank H2 at the top of WoA tho?