Cult Classic - The Author | Eliminate two, get one free?

I was taking out the superfan then the technician in the sewers and moments right after, I hear an explosion upstairs and somehow Jeff got killed.

I didn’t plant any explosives or went anywhere from the portico where you start straight to the sewers without doing anything else.

It was kind of convenient but not expected and ruined my SA for no (apparent) reason.

I only played it once, I moved on after so I’m not sure if it’s consistent but I’ll gladly try it again sometimes.

After the 3:20 mark, he gets up and jumps to his death from a cliff. Not sure about the explosion though.

I’ll start with Jeff next time I play this one.

Thanks for the input and thanks to Clemens for these missions. 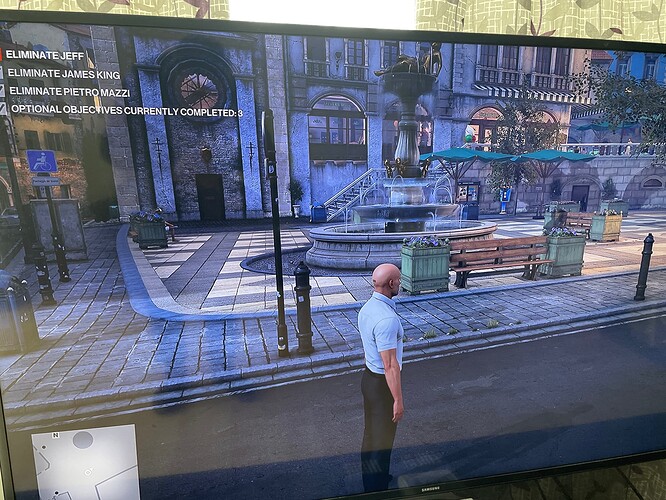 Did you kill him in Bangkok? If not, did you head to that bench right away? You have to not do the one and do the other for him to appear.

Complete The Source mission in Patient Zero campaign preventing Jeff to do whatever he does there.
You can do it by just knocking him out and hiding in the closet right in the bathroom where he is.
So, head to the exhibition, knock Jeff out, hide him in a closet and proceed by killing targets.
After they are down, finish the mission. After mission is complete, launch the contract again.
Jeff should be there

You actually don’t even have to do that. Just do a dirty run of The Source (kill both targets fast, no SA then exit) and then Jeff will be in Sapienza.

I always aiming for SA.
Of course nobody prevents you do this.
Thing is you have about 3-4 minutes to do that if you don’t knock out Jeff

If I remember correctly, you don’t need to interact anyway with Jeff in the source. After he finish to argue with his girlfriend, he goes to his room and stay there undefinetly. He won’t try to kill himself in this mission.

The only requirement for spawning Jeff in Sapienza is just not killing him. Just leaving him alone is enough.

Few weeks ago I played this mission for achievements and never saw Jeff, but yesterday trying to play this contract I didn’t see him there on the bench, and there wasn’t a target mark for him.
After doing what I described above, I finally saw him there and was able to take him down

I see. I was sure Jeff still spawned to me on Sapienza, even without interacting with him on Bangkok. Maybe I was wrong, long time since I played PZ campaign.

Edit: may I ask you: do you remember if you played, in the past months, some contract of the Source where Jeff was a target?
I have a feeling (not sure) that the game “register” the status of Jeff not only in the main mission, but even on contracts.

Just for information, I just tested.
I played the Cult Classic contract at first, and Jeff was not present in the map, because I remember I played an old contracts months ago where Jeff was one of the targets.
So, I played the Source, the main mission, and completed it without even get close to Jeff, I neither triggered his dialogues with the girlfriend. Now Jeff is in the contract.

So, you don’t need to interact with Jeff in any manner on Bangkok, and he will spawn on Sapienza.

I always aiming for SA.

My point was SA isn’t necessary because you’re only playing The Source at that point to trigger an event (getting Jeff to appear in Sapienza).

I don’t understand. To complete the contract in Bangkok you have to kill Jeff with an axe.
I you don’t kill him and kill only the three other targets, it is not possible to finish the Bangkok contract .

And if you start the bangkok contract first and finish it (killing Jeff) , it is impossible to finish the contract in Sapienza as Jeff do not be here. There is something that I do not understand but I know we will help me

How can you finish the mission without killing Jeff ? As it is a target.

He’s suggesting the regular The Source mission, NOT in contracts mode. Just play it once without killing Jeff and he appears in The Author in both mission AND Contracts Mode.

OK, so I have to play again the mission in Bangkok… OK, let’s
go.

Yes, but the actual Source mission, the one in the main game, not the contracts mode mission that takes place on the same map.

If they were going to use Jeff in FEATURED CONTRACTS, they really should have just made him always appear. Explaining him is going to be a full time affair.

I think that’s why they didn’t have The Author in contracts mode to begin with.