Your target is Dylan Narváez, currently in Sapienza with his identical twin brother, Gonzales. The Narváez brothers are tobacco billionaires, operating in Mainland China.

Note that Gonzales is not to be harmed and the contract will be cancelled if he is injured in any manner. As they are identical twins, you will have to choose your target with supreme care. We have learned that the target has recently purchased a one-of-a-kind platinum Mangôt wristwatch, so if you can get close enough, this will help you to identify him.

Dylan Narváez is one of two identical twin brothers. Together with his “older” brother, Gonzales, he made a fortune operating semi-legal tobacco factories and smuggling operations in mainland China. They have a network of factories across Chengdu where they leverage corruption and lax local laws to run what is essentially a feudal empire.

The two are notoriously competitive in all matters, striving to be the first to achieve something or to acquire something that there is only one of. Specifically, Dylan Narváez has acquired the one-of-a-kind, platinum Mangôt, a $50,000 wristwatch, snatching it up just ahead of his brother. The two are in Sapienza on a stopover before returning to China and can be expected to be roaming the city.

Note that the Narváez twins are identical and dress in exactly the same way. As such, the platinum Mangôt is the only way to correctly identify the target. 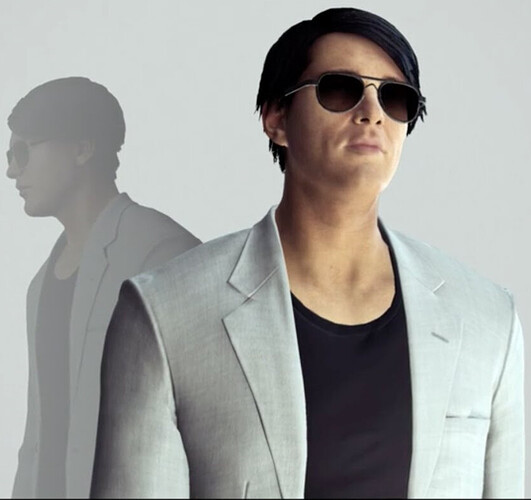 Does anyone know if pacifying the other twin is allowed?

I missed this one originally so I’ll be making sure he’s eliminated this time.

The correct twin that is

Note to self: can you please make sure you actually get the Silent Assassin rating on this one, scat? You’re sitting on 4/5 H3 ET SA rankings and you’ve thrown away the chance to wear that Winter Suit three times in a row now, so would you kindly pull your thumb out and put this bad boy down with Green Guns?

I recall playing this one in the past. I used the emetic poison on the non-target twin and no fail, but I’m not 100% sure if pacifying would be any different.

BUT, you can shoot him (non-lethaly) or poision him with emetic poision. Or atleast that worked last time I tried it. Basically he has attached no pacifications and no elimation condition on him, but other shenanigans are allowed.

This is one I’ve been waiting years for redemption for.

A good chance it could happen again!

Once you find which one is wearing the watch, just tag him with the sieker. Unless IO is going to remove that weapon.

I almost got shot to death in his 2nd run because I had to fiber wire him in the bathroom… I used an emetic syringe on him, but he puked in a trashcan… I killed him, then his bodyguard came in and spotted his dead body.

So maybe the… thing can work this time if NPCs are indeed supposed to prioritize toilets over trashcans.

I cannot remember how I killed him last time - but it wasn’t SA (didn’t even try SA most ETs in H1), so that shall be the goal this time around.

It’s been just under five years since I played this (the contract first went live July 15th 2016) - so it’s so old its new again. And this time, there are so many more possibilities with all the various new items in our inventories - as the inventory was very bare-bones at first activation. I think we had maybe a few syringes and some gun unlocks at that stage.

This is sure to be a fun one.

It’s that time again where I ask how you’ll be tackling this ET?

It’s nice that we’re getting an ET that hasn’t been activated since Hitman 1. I don’t even remember how I did this ET back then but I most likely failed it horribly, as I did with many ETs in Hitman 1.
I myself will of course try to keep this alive 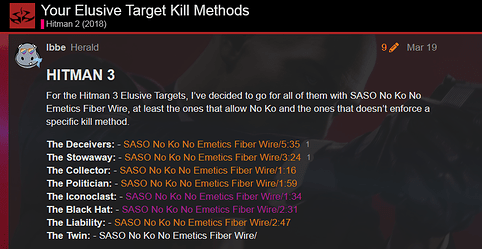 And last but not least, awesome art from Khaki 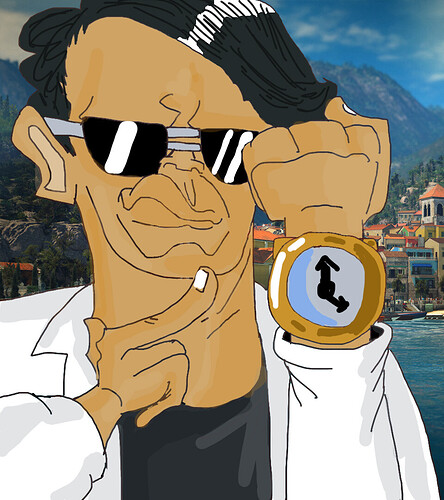 how you’ll be tackling this ET?

For now I’m thinking about The Bells are Ringing.
I’ll see how it goes on site, if something will interfere, I’ll think of different way

slow, and lazily, to keep in theme with the theme of sloth

good to know. i kinda planned to knockout them both with new sloth mine, and than just look for a watch saso walking only for this guy, kept in theme with the sloth season 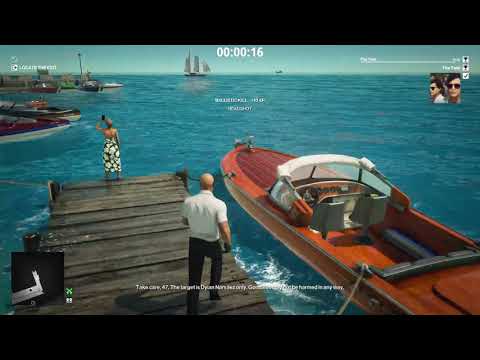 SASO. Easy and quickly, nothing special.

The eight one of my ‘SASO No Ko No Emetics Fiber Wire’ on Elusive Targets series. 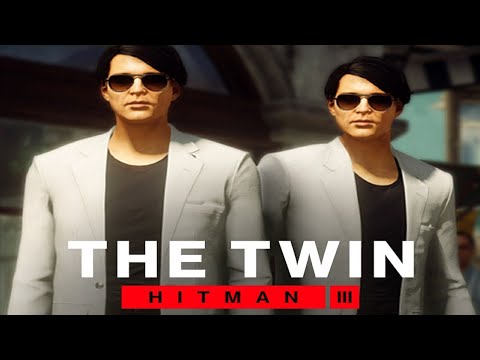 This one got a very simple loadout 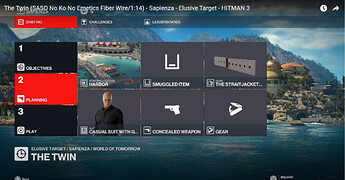 And of course, another one for the count 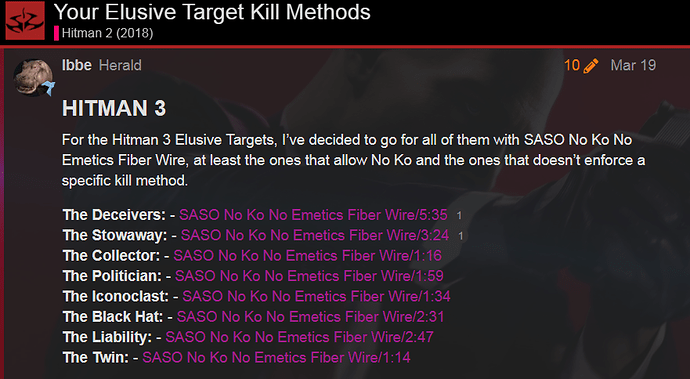 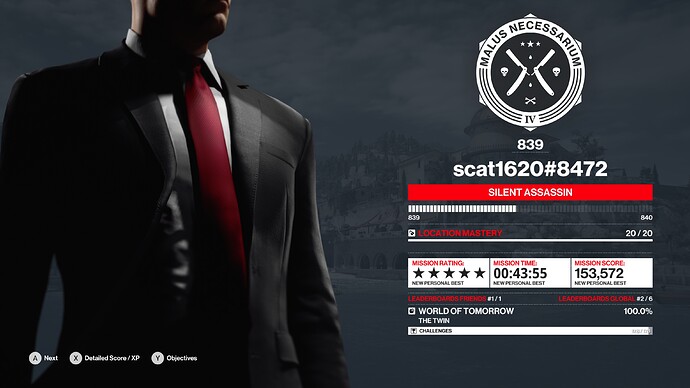 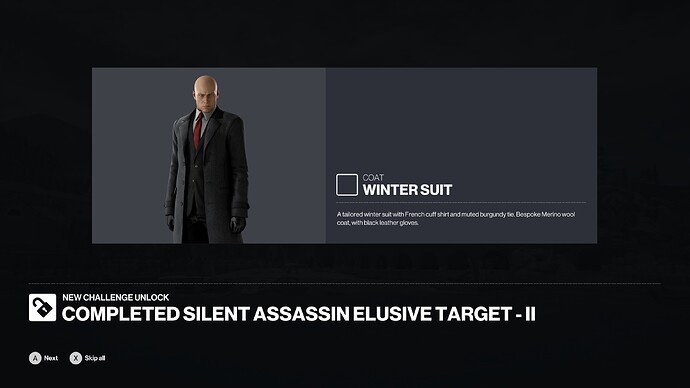 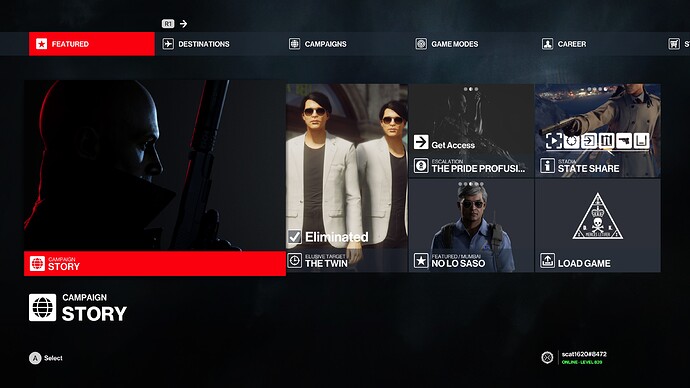 I tell you what, though, IOI need to sort out their fucking servers, at least on Stadia. Had repeated Disconnects throughout, despite my internet connection being fast and stable on other websites/devices, and after I killed the target it literally took several minutes for the server to register the kill and show my Objective completed/spawn an Exit. Like, literally 6-7 minutes of real time. I was absolutely bricking it that I wouldn’t be able to Exit the mission, and instead I’d have to Restart or go back to the Main Menu with the kill already made but not registered, and therefore permanently fail the ET as a result.

Very happy to have finally got my 5th ET SA, but IOI’s shoddy servers made that a much less pleasant experience than it should have been.

I think this is the first time I’ve successfully used the emetic device stashed in the briefcase trick.

Decided to challenge myself for the first time on an ET, was really fun, although trying to get the target to follow me to the lab took quite a while