I had a long break from game since first Arcade ET was introduced, back then I was tired of game so much that I even don’t care to try these first Arcades. Now I’m back and have a lot of fun playing it (but some unlocks are quiet weird and I don’t like it). It will be a great time spend awaiting a Freelancer mode!

Then do it the way they prescribe, and then do it again this time the way you want. (=

FYI, if you did arcade before chllanges were uploaded, you have to redo them again to unlock chllanges (and pen).

Dude you are such a Drama Queen. You taking things too seriously. I see it now clearly why we can’t find agreement on anything and futher more any discussion with you is pointless, mr. I’m always right

Made that realization about you a week ago in the Freelancer thread, Mr I know more than anyone how challenging the game should be.

Drama Queen implies demanding attention. I’m not after attention; I’m after results. I keep having to experience this same disappointment every time they bring back a new ET and put it in this mode. Other than the Sensation earlier this month that actually broke the streak, I do otherwise mean every time. I’m sick of it.

Well if you see Heisenberg’s post here is a really difficult tip that took Scientists hundreds of years to discover: Don’t bloody read it!!!

just joking ofc! But if you do see his post on here just ignore it

I’m not missing out on anything, because I’ve already read it. And re-read it.

I didn’t even bother trying to get SA for “The Chef” since I was playing Arcade nor regular. Intending to go as quickly as possible, I started out in the kitchen, made like the manager by writing up the Chef using my new exploding pen, and then making my way to the basement exit…only to find it blocked so I had to make my way to the top floor via the locker room. The stylist just happened to be passing entering so I bumped into him and he just stood there complaining so I decked him and continued making my way to the ground floor and exited via the front. On my way I decided since I was already spotted to run between the news lady and her camera with a weapon causing her, the camera guy, and countless viewers to panic. I went through the front gate as the guards opened fire and the crowds outside panicked as I casually walked away.

I used the “Ancestral Fountain Pen” and found it difficult to use for targeting SA’s.
I would like it to be like a knife or screwdriver that sticks to the head, I can overthrow at a wall or something and it sticks.
If it could stick to walls, it could be used to destroy surveillance cameras and winches.
At the moment it is a very difficult item to use.

And kill 47 in the process with explosion

And only 47 - NPCs are only knocked out.

I had no time this weekend, so I’ll be doing it over this next week. But it’s definitely on my current to-do list.

Ok man looking forward to the dialouge next week

As I’m currently collating footage for the Chef, if anyone has noticed anything I might miss, then please do let me know. I’m very grateful to @Raisu and @Kesington019 for their help last time with the Sensation.

Been catching up with ET arcades for the last couple of days, think i had about 24 to complete after my long hiatus from Hitman

well i’ve finally done them all, Now i can play them at my own leisure, as i like to get my best possible score first.
I was dreading the restricted loadout ones, so i saved them for last, then you realise all you need is a propane tank, a gun and a good hidden spot to shoot from

then you realise all you need is a propane tank, a gun and a good hidden spot to shoot from

That is something that always take me of from immersion. I understand that Hitman need to be balanced between being realistic and just easygoing, but these accidents with shooting gas tanks, blowing cars from nowhere or Instant killing poisons are too way arcade in my opinion.

I hope that in next Hitman game there will be some kind of mechanics where we need take look on evidence like blood pools, left behind murder tools or beliveable accidents etc.

WoA is way too arcade in comes to some aspects, way too far for my taste. I know that game should be fun buuut it’s little to much simplified.

Subdue with bare hands within 0,5 sec? On come on

I hope that in next Hitman game there will be some kind of mechanics where we need take look on evidence like blood pools, left behind murder tools or beliveable accidents etc. 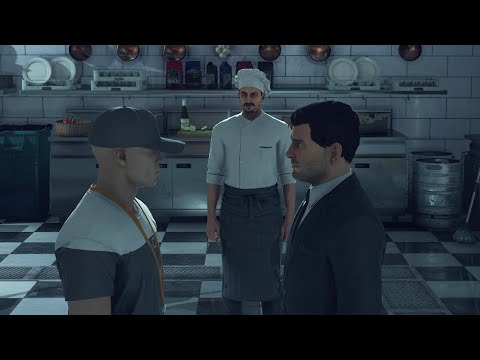 I was surprised to discover how much dialogue this particular elusive target had to offer. I hunted high and low for dialogue, so I hope I didn’t miss any significant lines. Also, due to the way that dialogue is spliced together by the game using random segments, it was an absolute nightmare to capture all of the dialogue and edit it together in such a way that it minimised repetition. I hope you enjoy.

Would be nice if they brought that back

I’m not really sure where else to put this, so I’m gonna put it here as anything related to ETs anymore will ultimately come back to Arcade mode, but… I think I may have figured it out about the H3 ETs.

Most of us know by now that ETs have always been kinda quasi-canon; that feel that they’re taking place at the same time as the main campaign missions (which makes no sense), or took place in the same locations at earlier times (which also doesn’t make sense but is more workable than the previous theory). For example, the Paris ETs took place earlier than the Showstopper mission, at other Sanguine fashion shows put on and Dalia had other auctions take place during them, so Paris ETs were attending similar events years before the ones from the main story, and we are just supposed to ignore identical dialogue and such as a gameplay mechanic left in by the devs for technical reasons. Most of us get that now, I think.

However, the ETs of H3 have been different because the locations in H3 are more plot-dependent than other locations have been, and it’s very unlikely due to that plot that 47 had already visited the Scepter in Dubai, the night club in Berlin, and the wine party in Mendoza years earlier at similar events, and flatly impossible for him to have gone to Dartmoor any previous times, let alone two, or have two ET assignments simultaneously, or even after the main mission, because of how the story unfolds. So how do we reconcile these seven ETs with the others that can more or less be considered to have actually happened? The answer lies in the Seven Deadly Sins and the Seasons of Sin that each ET came with.

47 was hallucinating the escalations of the 7DS and imagining them in the most recent locations he’d been in because that’s when his life began to unwind, what with the loss of Grey, the ICA turning against him, him having to end his professional career by wiping them out in return, and Diana seemingly turning against him in Mendoza. So that’s why he hallucinated those settings, and his feelings of guilt caused him to hallucinate the sins he’s guilty of. And the H3 ETs correspond to those same sins. So, the answer is that 47 really did kill the H3 ETs at some point in his career, but they’re coming to his mind now because he’s the one who associated their behaviors with the sins he’s thinking about, and he’s hallucinating that he’s killing them on the maps that he had been to recently that are in his mind.

If true, this means in particular that he did kill the Collector and the Procurers, but it was not at Thornbridge Manor; he killed those guys in some other mansions that were filled with artwork and recently had a funeral for one of its residents, but his mind is supplementing the Dartmoor map in its place, and he’s filling in the gaps by imagining the ETs interacting with people they didn’t interact with, but in the way they would had they met those same people, like Jack Roe talking to the Carlisles. The Ascensionist was likely killed in a different skyscraper, the Liability at a different nightclub, the Iconoclast and Heartbreaker at different wine parties, and the Rage in a different Chinese city, likely Hong Kong or Shanghai.

This would allow the ETs for H3, like the 7DS themselves, to be canon events that are taking place in 47’s mind, but based on real targets that he killed at some point in the past. And to throw one more in for good measure, this could also explain the Undying Returns without ignoring Vidal’s comment in Mendoza and without ruining 47’s record of never failing a contract. He did kill Mark Faba and he stayed dead, but the UR ET is just taking place during these nightmares 47 is having between Mendoza and Carpathian Mountains, and it would make sense 47 might dream a target with a reputation for never staying dead would come back even after he took him down, but if it’s just a dream, 47’s record stays intact but the ET is still part of the canon.

This is all a stretch, I know, but the nature of the 7DS and how they connects it to the story allows this to work. All the H3 targets could be in the ICA database, and we’re just experiencing the events in different locations than they were.