Entering Mendoza's Invitation check area with The White Shadow Suit, it is recognized as the Trespassing area

Entering Mendoza’s Invitation check area with The White Shadow Suit, it is recognized as the Trespassing area. Other outfits do not, but only occur when they are The White Shadow.

Look at this video. : 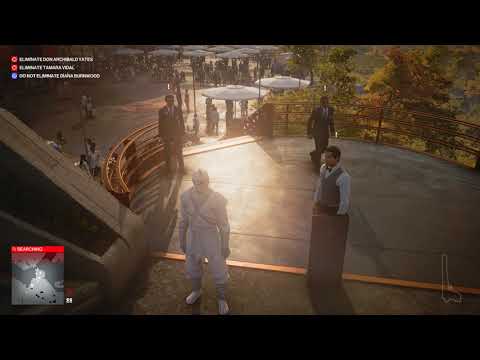 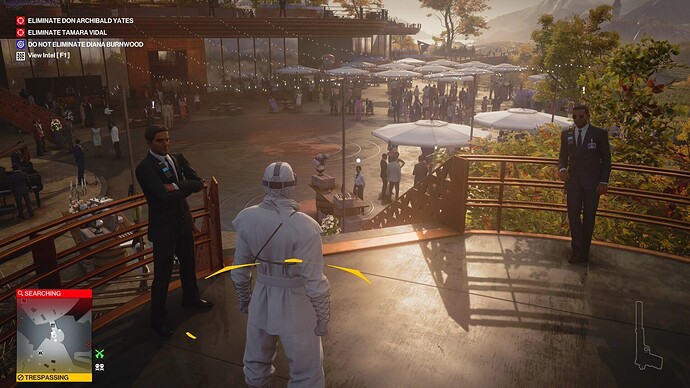 The first place you may want to check is the Known Issues thread:
HITMAN 3 - Known Issues)

This new suit is restricted pretty much everywhere, so you’ll be tresspassing in any map wearing it

Is this intended? Or is it a bug?

I think we don’t know.
I just will say it’s weird and making this suit pretty much useless, as for my taste

I knew that all Suit is different in appearance and all functions are the same. So I posted an inquiry because I thought this phenomenon was a bug.

Yeah. I think so.
I think this is a bug. Otherwise, the item description should be written as illegal disguise.

Probably just a rework of the textures of the black ninja suit which was suspicious in the whole of hokkaido. It’d make sense for it to be intended as it is suspicious as hell, but it’d limit your gameplay while corky the clown would be fine? lol.

Probably get fixed soon, like the illegal bananas, umbrellas and eggs.

It’d make sense for it to be intended as it is suspicious as hell, but it’d limit your gameplay while corky the clown would be fine? lol.

Guards and civilians in the World of Assassination know not to f*ck with Corky! first place is off-limits so that’s correct, second one seems to be part of the bug.
I’ve tried various maps, free areas or restricted such as hokkaido.
Start off at Paris and nobody cares ‘hey is it mr. ninja or ninja sir?’
Start off at Hokkaido 1: bed, can’t lie down as ‘mr. reaper’ , illegal
start off at hokkaido 2: sauna, get shot up before you get up.

Mendoza doesn’t give you the option to give an invitation. Blending in works but not when it’s tied to an identity.

Conclusion, while you’re in this suit, you don’t count as agent 47 but ‘ninja’ , while entry passes or rights apply to ‘47’.
i.e. i could run around miami race, but i couldn’t get in through the line.

Probably intended. It behaves like the ninja suit (if you mod it to work on missions other than hokkaido, then frisk zones become trespassing zones)

I think it’s intentional. A guard in Berlin refused to frisk me when I was wearing it, telling me that I should sneak round him. Once I’d crept in through a back door, everything was fine.

I think suits like this are suited for pure stealth gameplay and “ghosting” and it makes sense they’re illegal across the map. The same should be true for outfits like the bank robber, and it’s weird it’s not.

The issue with Hokkaido and probably some other maps is not having a suit only starting point without a lot of people around blocking your pathways.

If IOI changes or patches the behavior of the White Shadow Suit, I hope they are very careful in tweaking it. There is a lot of awesome ninja dialogue by NPC’s. I’m just afraid that if the developers remove the trespassing behavior linked to the ninja-ness of this suit, they might accidentally remove the “ninja flag” that enables the ninja comments by NPC’s.

Speaking of which, i’m guessing they’ll throw some paint on that one and call it an easter special suit.

The White Shadow suit oddly being trespassing in various locations makes for hilarious moments, though, when 47’s doing nothing wrong but wearing it and the guards decide to just shoot him.

In Mendoza, I found that if you’re tangoing with Diana as the White Shadow, the moment the guards decide to open fire cuts the scene short: In Whittleton Creek, the White Shadow is trespassing inside the Wilsons’ house: And the White Shadow is completely useless for a couple of starting points in Hokkaido: 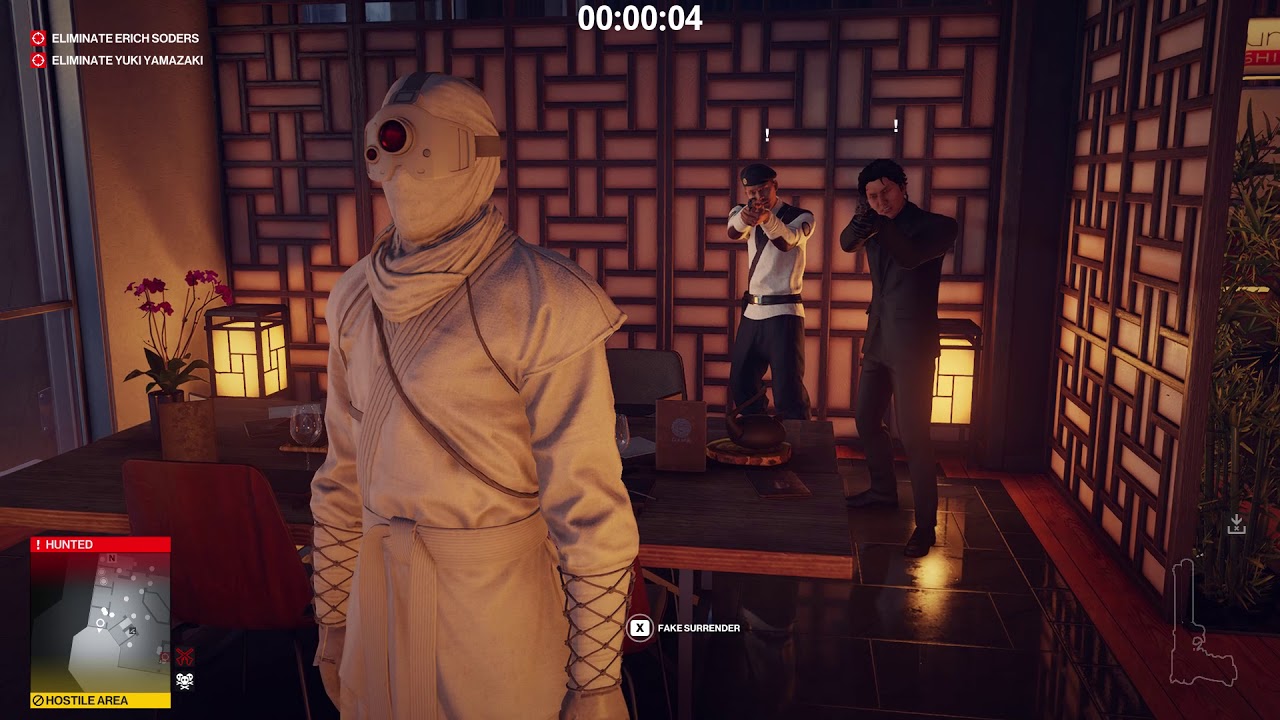 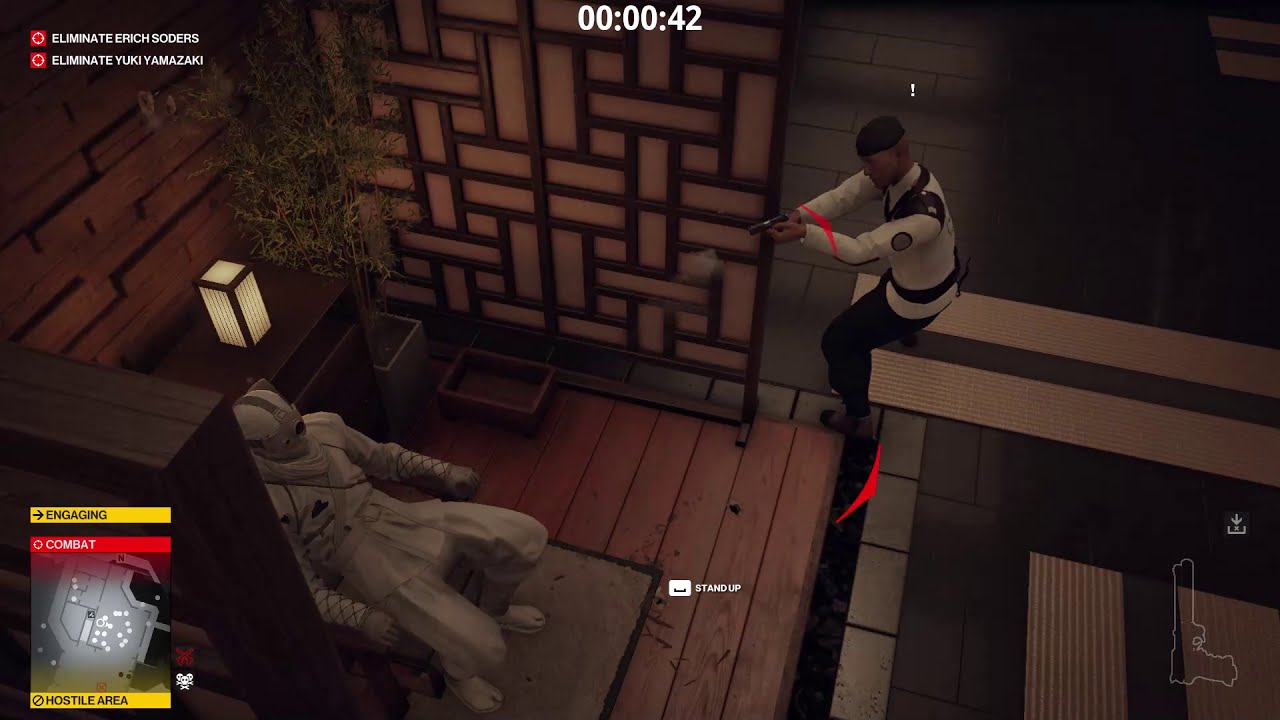 Now I’m going to be hunting for anywhere else the White Shadow is Trespassing when a normal suit is fine, just to see if I can make any more funny “The White Shadow Does ____” videos.

Personally I absolutely love the concept of a more restrictive suit. It could even begin a entirely new category for speedruns.
If IOI “fixes” this, id love for them to compromise and maybe introduce “legal” and “illegal” variants for disguises like this . This way both people who like it as a cosmetic and people who like it as a way to change up gameplay for something more challenging would be satisfied.

It could even begin a entirely new category for speedruns.

This, if they just put it on a new tab of outfits instead of themed it’d be fine with some minor tweaks.
Right now it plays like you’re solo with no ICA to create an identity so all areas with a required identity like mr rieper won’t work but ninja runs from certain starting points on certain maps would be great, worked well for Paris for instance, where they don’t do frisks and invitation checks at every corner of the starting points.

I’d like to see it as a limit the entry points to the ones that work, then play like the ninja challenge in hokkaido was and have a challenge for it. ‘The White Shadow’ like a superior SASO. (although the blade does hunger, lol.)