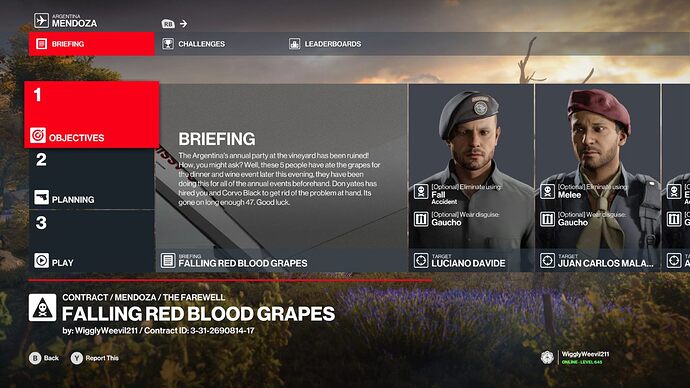 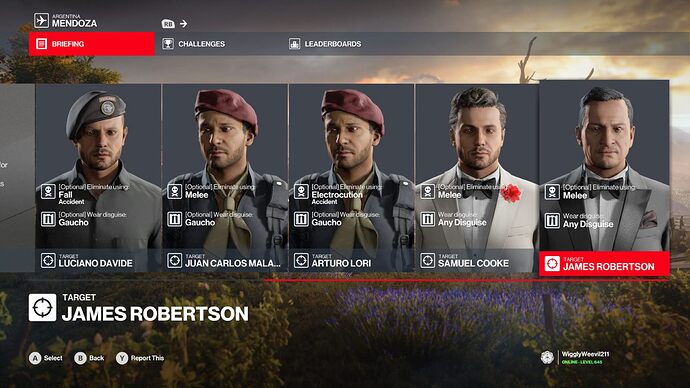 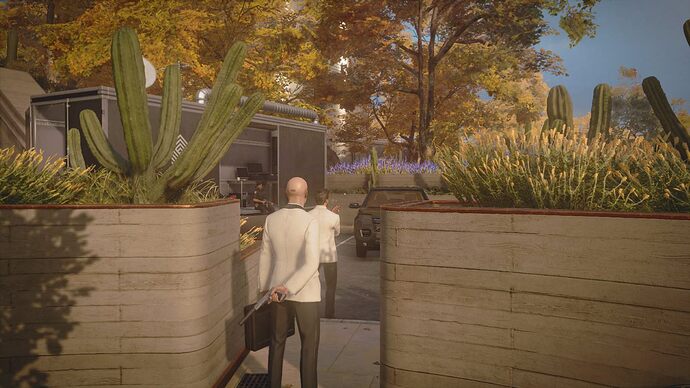 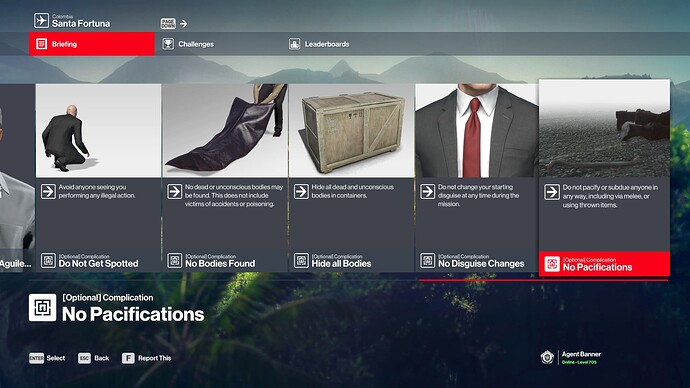 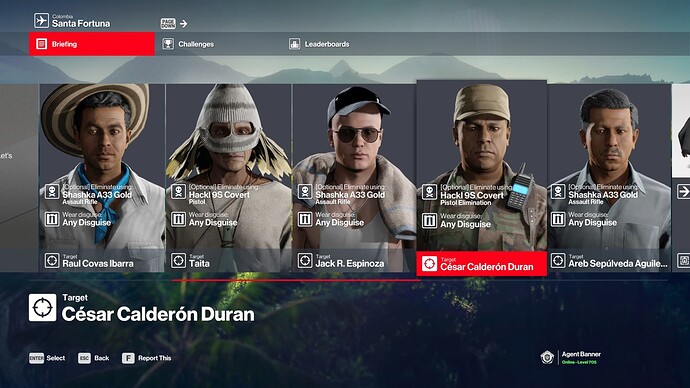 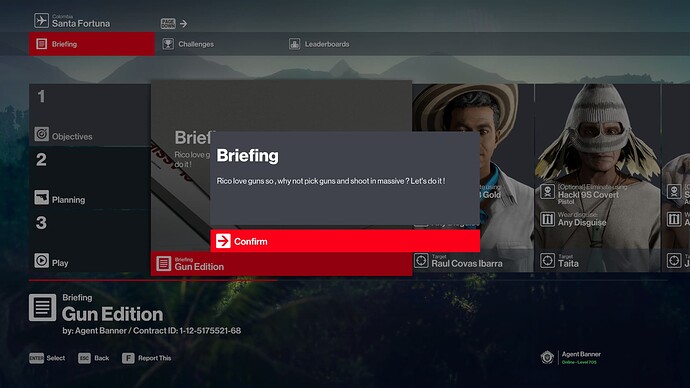 I see. Apologies for the wait. Clemens, Community Manager at IO Interactive (@Clemens_IOI) will post a submission thread on the forums.
The thread appears typically a week before the said Featured Contracts gets released.

Once the thread is available and open, you go in there and read what Clemens wrote down. Once you’re ready to submit your contracts, click Reply on the thread and make a post. You’ll need to include;

Do note that there’s a date that the submission thread closes. Typically a Monday on the week of Featured Contracts. It is listed in Clemens post on the submission thread. The time is in Central European Time (CET aka UTC +1) or Central European Summer Time (CEST aka UTC +2). Clemens does sometimes take late submissions on the day. He will not take submissions after that Monday. The thread is not removed when it’s closed. That is so that you or anyone can play other people’s contracts that they’ve submitted any other time.

Here’s a link to our Food Fight Submission Thread from last month, just to understand so that you know what to expect when the submission thread for Heat Stroke and Hot Scope appears on the forums.

Happy May and happy Roadmap Day! As you probably have noticed the May Roadmap has some FC’s, and we need your help to make them best contracts there is! First batch of Community created contracts in May are themed around Food Fights (however you interpret this is up to you, but let’s not only have food kill contracts

) I’m super excited to kick off the second Official Community FC Submission thread in Y2. It’s time to get messy, target some chefs and poison some food. How to get your C…

Good luck bye the way and welcome to the Hitman Forums. It’s nice to have someone new here. I’ve been on the forums for 1 and a half years. I’m familiar with how it works… mostly.

Thanks, im already loving this forum.

What platform do you play on? If its xbox my name is Wigglyweevil211.

Xbox as well. DavidG185 is my gamertag on that one too. Add me to your Friends List. And I’m also on YouTube. Same username… no videos created. I use it to write comments. Of course if you want to message me on the forums, I’m free to read them if there’s time. I’m also active on Twitter. Posting other games related stuff.

Tip: When you submit contracts, use your username on your platform as your Submitter Name, not your forum username.

ok will do. The submission says i have to put contract ID, since its in the bottom left of my images does that count?

Technically yes but would prefer actually typing out the Contract ID on the post. Gotta make it look a bit presentable as a submission post.

Ok thanks. I will checking your contracts out on xbox. That will keep me busy untill the featured contracts get realised. We need more content.

Bye the way @Charlie_Farmer. If you’re curious what this thread is, it’s the Fan made Contracts of Hitman 3 thread. This thread is great if you want to share contracts with other people. It doesn’t have to be contracts for Featured Contracts. It’s a pretty good way of sharing contracts that you created and like to the community. Also good to get feedback or watch people play other people’s contract.

Yeah. Also try my contracts if you want to. Tap on my profile icon and tap [Number] Post in Topic. It’ll show all the post that profile has posted on the thread. It’s really useful for threads with LOTS of replies, especially this one.

How do you change your birthday on here? Its not saying i have one. I looked at may for mine but its not on there, is it a only appears on there when you’ve been on the forum for a year? Or not.

The only featured one’s I’ve done are sizzling sunset slumber boat and iced whiskey with an explosive tang. The other posted contracts are just general ones for a casual audience, some are easy enough that a casual player can find a good method for SA, same for more experienced players.

Sent you a message bye the way.

what was message? I did kuiri police in 4:28 it says i got 4 stars, i accidentally threw the knife into lars not meele but he was still awake not knocked out my bad. Not bad for a first run. Liked your mix in throwing and meele, your last target was a enforcer so he was a extra challenge.

Oops. Message that I sent on the forum was about your question about birthday. Anyway. It looks like you got things under control. Great job with my contract - The Kukri Police. Instinct will help you out obviously. Of course once you’re familiar with the map, it is a bit easy to “read the room”. Since they’re not Poison or Accident Kills, you need to make sure no-one can find the bodies. So hide them behind objects and out of view of passerbys or dump them in closets is best strategy.

Yes, the idea of utilising both melee and thrown weapon kills with the same weapon is really clever. It’s a tad reminisce of one of my old and favourite contracts - A Grape Travesty. You can find it in this thread. It was one of my envy contracts along with The Kukri Komposition which the latter I’m resubmitting in Heat Stroke. It’s going to be one weird batch. I had the Hot Scope ones ready before this one.

Bye the way, try The Night The Duck Cried. It’s one of my contracts and it’s my first one to get featured. First Rubber Duck one you see in Featured Contracts. Was originally submitted for Wrath. Last year was all about the 7 Deadly Sins.

That should keep you busy for a while. Good luck with whatever you’re doing. I got things to do now… like sleeping.

People, I hereby open the HEAT STROKE CFC submissions thread!! It’s hot, it’s summer (at least on the northern hemisphere) , it’s HITMAN! We’re looking for 6 Heat Stroke inspired contracts to feature. So bring out your summer suit, and get creative

(however you interpret the theme is up to you, but don’t mod Rudd

) How to get your Contract Featured: Well just as last time, there are many ways to get Featured. It can be based on a super creative briefing, a cool…

@Clemens_IOI Does ioi have any plans to give Lil’Flashy to players recently?