I completely forgot that these are released today! I was surprised.

Definitely was not a bad batch of FCs! “Two Turnables & A Micro-Sized Explosion” and “Third Time’s the Charm” were great contracts.
Shacknews will be now known as to me “Good Contract Makers” instead of “Roadmap Leakers” now

I’d give them title “Best sponsored contract makers”, because this so far was best batch of contracts from non-community. I liked the background story, all contracts tied nicely together, it felt like a bit story-driven escalation. And they were a bit puzzly, but nothing hard. I liked all of them, expect for Two Turnables & A Micro-Sized Explosion which was driving me nuts as I was trying to get SA on it, but still great stuff.
Oh, and Red Ruby SMG is pretty nice too.

Speaking of Turnables & A Micro-Sized Explosion, as you said, it’s excruciating to get SA on it. I had to use the sedative snail, that was the only way to do it for me.

This was a good batch yeah. ShackNews feels like people who knew what they wanted to do with these. EasyAllies, TAG, Outside Xtra and Kinda Funny felt like they were made by people who didnt understand the mode. I know some of them or all of them have played Hitman but all the contracts I bet they just tagged and killed random people and made that a contract. Whereas this feels like how I would make a contract, each target feels considered and the kill methods were all clever. I didnt realise there was any puddles outside the club. I wasnt too big on the fibre wire one mostly because I didnt really get it, it didnt feel like there was a hook. Like the first one was being a DJ to kill people, the next was trying to trespass to kill targets in ways that are risky since theyre surrounded. This one felt a bit random but it wasnt bad just weird

Well, fiber wire is the worst weapon in the game so…

Not terrible, and I would have gotten SA on 2 of the 3 if not for trying to dump a body in the canal. Ah well.

Random question though, has the page that shows the featured contracts reward tracks been removed or hidden somewhere? Because couldn’t we see how many we’d done the Rewards? Or have I gone crazy and am imagining things?

Ohhhhhhhh! thank you so much, I though I’d gone blind or something.

though in retrospect, it might also be the bourbon.

Love figuring out an SA strat only to be spotted through… solid tarp? 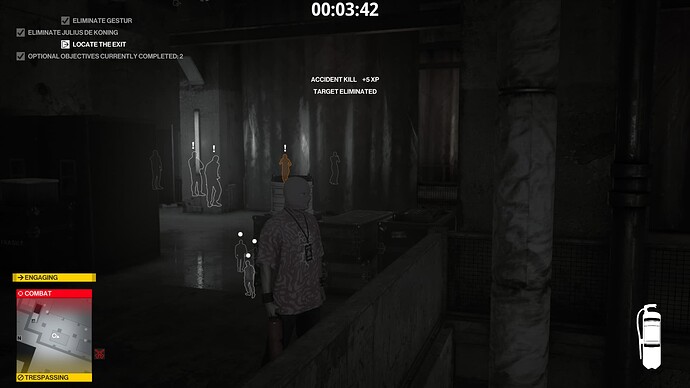 The total apparent transparency of the tarps is exasperating!

They said they fixed that bug

That particular instance or wallhacks in general?

There’s a pretty good spot I figured out today to lure Gestur to a pushable position. I will leave a spoiler here in case of anyone wanting to find out by themselves.

Thumbs up Shacknews! Not too many targets. Straight forward. A little bit of problem solving. Each taking me ~20 min or so of restarting to figure out how to reach SA.

As long as content isn’t something like Fall Season Preview where you have to have to have 30 minutes of perfect timing to complete, I am fine with all content.

Even though IOI aren’t putting big man hours on generating new Hitman content, what they are putting out there since release has been fun for me.

The English Garden Party thing is just a great sandbox of Hitman stealth kill opportunities. This is Hitman at its best.

The Seven Deadly Sins has been fun for me also. Some of it is meant to be a bit surreal and trippy, and that is OK to me. The voice acting in Hitman 3 has been especially great. I loved the English accent guy who did the Peacock, especially.

Escalations are just a format for puzzle solving. Fun for me.

I do the elusive targets, but I don’t like the idea of a one off, that has a permanent failure state. What I like most about Hitman is that you can reload and repeat without feeling like you are losing. The glory is in having that perfect run after failing many times.

I get the marketing idea of having content that is temporary to attract players back to do Hitman content regularly, but I think it is a bit of a wasted effort for a player like me.

Just for consistency, IOI should make all blunt melee weapons legal or illegal but not both. The fire poker in Hokkaido is illegal, but they have adjusted the game to make the lead pipe and driftwood legal. There isn’t a difference between a hammer, wrench, lead pipe, fire poker, lead pipe or driftwood.

The snail mine is OP, because its range is way too large, and also it isn’t illegal when holding it. If I hold a emetic grenade it is illegal but a tranquilizer with huge area of effect cloud is not illegal. I don’t get it.

The snail mine is less game breaking than the electrocution phone though or when wall bang was possible and the fire extinguisher-breaching charge combo was lethal in Hitman2016.

That instance with the curtains.
It would be a miracle if they fixed wallhacks entirely.

I don’t know… If I see a random person walking down the street with a hammer or a wrench, I’m probably not going to give them much thought. They’re likely going to fix something, not murder anyone. On the other hand, if I see someone walking down the street with a fireplace poker, I am likely to assume they mean ill will. Fireplace pokers belong in the immediate vicinity of a fireplace. Almost anywhere else, they are certainly more suspicious than a pipe or a piece of wood or a handyman’s tool.

OK. Good argument. Fire pokers are not something one sees running down the street with. … Although I don’t think I have seen body sized incinerator before – and realistically, why do you need a fire poker next to incinerator? Incinerators usually have a grating where the ash falls down into a reservoir after cooking the bodies.

I get why you have fire pokers next to the fireplaces in Paris or Dartmoor, but next to an incinerator? Are you incinerating the body, and then spreading the left over coals with a fire poker? That is pretty creepy.

Hitman is “*world adjacent”, meaning that things in the world are consistent and believable with a look and feels like something real within a fake gaming world – it all makes sense as long as you aren’t thinking too deeply about it. 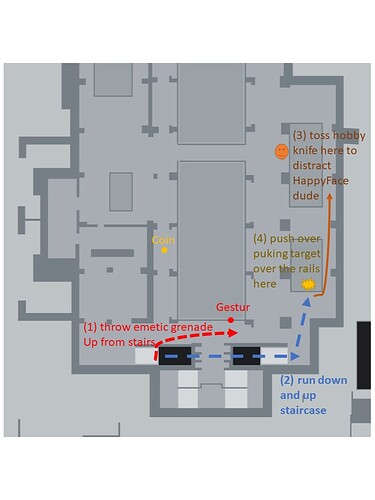 Isn’t this the way most did it ?