I don’t think that @Hichkas arguments have no foundation, he even pointed out why he sees it that way. And he also said that he’s not good into criticisms, but he has every right to tell his opinion.

I don’t think that his posting was just for provocation, his arguments feel very conclusive for me and I agree with many of them

So I think it’s kinda rude to call him stupid, especially after he asked for a respectful tone.

Lets be frank. Blood Money was a bloody good Hitman entry. There might be things better and worse compared to other entries to the series, but those are certainly minor. But its not overrated. It has the sandboxy, freedom of approach style covered which we need for a great hitman game. Everything else are just opinions and preferences.

I don’t think it’s overrated. It has its dedicated fans. Especially among the true Hitman fan base there seems to be a good size section of us who prefer BM the best. Maybe more so than any of the other pre* WOA games. It’s a good game though and, as others have pointed out, it didn’t sell particularly well. I remember reading someone on the old HMF correctly pointing out that it’s sales nearly killed the franchise and lead to the largest gap we have had between games.

Oh boy where do I start

Not only are you wrong, you’re stupid

If you are unable to present your arguments without having to rely personalised attacks, you shouldn’t be posting and heavily reconsider if this forum is the right place for you.

I expect every user to follow the forum guidelines. Next time I’ll be sending out warnings.

This is clearly tries to present itself as fact, which is why I ridicule it

come on, man. subjectivity is implied: even so, we don’t need to be belligerent about it.

And the homophobic, sexist and misogynistic aspect is something I don’t like either (it’s a problem of all older Hitman Games, but in BM and Absolution it’s the most extreme IMO).

this. as much as i love playing bm, the (for want of a better word) ‘politics’ are reprehensible.

I guess the title was not quite what I meant, So I renamed the thread.

The whole Diana/47 plot, the ICA being infiltrated and the political structure… they did that better with the WoA trilogy, because it was much deeper and felt more “realistic” there (at least till Hitman 3).

This might be unpopular but I think WoA had one of the top 3 plots in the whole franchise. I find it quite in a good flow and well “prepared” which gives you a good understanding even if you’re new.
You play the training missions (which are canon) to be proven that:

Then the first four are there to prove other points: Providence’s deep connection behind the curtains and Grey’s long-term plan.
It’s not until the latter missions of HITMAN 2 that you actually damage Providence, and I like that. Some might say it was just to make the story lengthy but I see it as preparation (and a successful one) for a bigger thing in the end. There aren’t much unnecessary elements there, it’s Providence, ICA, Grey.

As for Blood Money, it involves ICA, random groups, more powerful groups, The USA’s government etc which I find tinkered and unrelated.

This might be unpopular but I think WoA had one of the top 3 plots in the whole franchise.

don’t think that’s particularly unpopular, though it always seemed like an amalgamation of a lot of previous games’ ideas executed better and more confidently, for the most part.

i don’t normally dig the overarching plots in hitman games, but i think woa’s narrative is really tight and intriguing… right up until the whole memory juice business. from there, it gets a bit messy and rushed, particularly with 3, though a full playthrough of all the games alleviates a few of my issues. 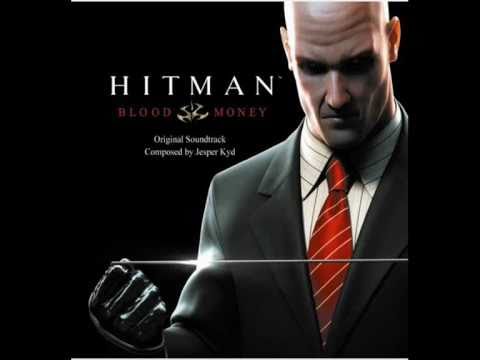 This track alone makes it absolutely NOT “bad” or “overrated”. Jesper Kyd knocks it out of the park.

Not to mention at least BM has weapon customization (though it is a bit unrealistic) and the best ranking system in the franchise.

Instead of building on these elements they just removed them or made them worse. WoA has the most casual mission rank system in the franchise and a medicore soundtrack.

To me it’s quality vs. quantity. I play BM for quality and WoA for quantity.

In my opinion, BM had the best type of Hitman story; one that allows for a globetrotting set of missions, all for various clients. He’s a contract killer, so disconnected missions for different people does make the most sense in his line of work.
Whenever it gets personal, is when I lose interest, letting your personal life get in the way of being the best at what you do, with the exceptions of each final mission where things come to a head and wrapped up nicely as nobody can best 47 (Meet Your Brother/Redemption at Gontranno/Hunter and Hunted/Requiem/even Carpathean Mountains) Absolution in general is bad for this which is why the final mission I can’t include in the exceptions as it’s so damn forgettable, and anything in WoA Another Life onwards has too much of a ‘this time it’s personal’ vibe which is nowhere near as enjoyable

Also, not a particular criticism towards BM, but the series in general. Do the devs not realize how LOUD a suppressed .45 ACP is? It’s about 125-130 decibels and the ammo is naturally subsonic (low velocity) so yeah in BM picking “low velocity ammo” doesn’t really make sense but it’s quite loud even with a suppressor, yet the gunshot makes that Holloywood “thwip” sound.

WoA does a bit better on getting weapons right, once you get the Krugermeier 2-2 (The games fake name for a Ruger MK III or IV) .22 silenced pistol that is the most practical choice for an assassin who likes to use firearms up close, as a suppressed .22 LR with subsonic is the closest thing you are going to get to “Hollywood quiet”.

Also, the 300 BLK is the practical choice for a silent sniper, as it was designed to fire both supersonic and subsonic ammo, and you can get the sound to as low as a 9mm subsonic with it’s subsonic ammo with a suppressor. 300 BLK is like a modern miracle caliber due to its versatility.

Not particularly sure how W2000 performs in real life but something tells me that it cannot trump the 300 BLK. 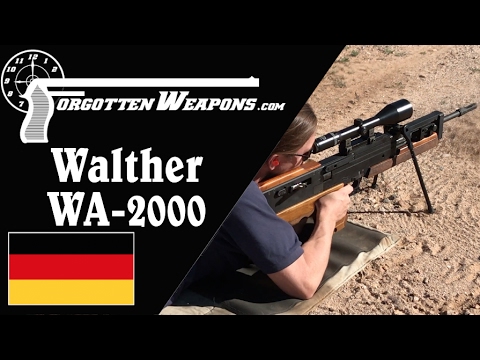 Wow. Color me shocked, it even has a closed bolt system and you could order .300 Winchester Magnum subsonic cartridges for it to make it ultra quiet.

German science best science but not best on wallet it seems

Also the fact that there are only ~176 made of them. 47 is a connoisseur it seems.

Yeah I’m now convinced the cost, size, barrel length, and difficulty maintaining it is probably not worth it.

Like the sniper rifle version of the tiger tank.

OTOH, You can easily change the barrel of any AR-15 to 300 BLK and with very effective short sized barrels that are very effective at 100+ yards with subsonic ammunition, at hella more cost efficiency.

It may not have as great of range as the 300 Win Mag subsonic, but it packs quite the punch and it’s versatility with several readily available ammunition types makes it all the more with it.

So yeah, all things considered, my “hush hush I don’t want anyone to hear me” sniper rifle of choice would probably be 300 BLK or even a .22 LR with 60gr sniper subsonic ammo designed for long barrels.

Gotta give credit to BM for one thing, and that’s fixing crap controls from previous games. 47’s heavy and deliberate movements started with this game. Before BM it was like sliding on ice. No more constantly fidgeting just trying to get 47 positioned properly.

I do think BM has the worst visuals in the series. Older games had slightly cartoonish charm, and Contracts had that noir feel to it. More realism came at a cost for this game, and I can only assume that making the game run on PS2 didn’t help.

Speaking of realism, BM killed 47’s face imo. Whether it was intended or by accident, 47 had that ugly but iconic face in previous games. After BM’s plastic surgery, 47 became a generic goon. To be fair that makes sense given his profession, but I didn’t like the change because 47 is supposed to be slightly awkward. IOI didn’t completely forget this as 47 still has tons of awkward looking animations in H3, such as when running up the stairs 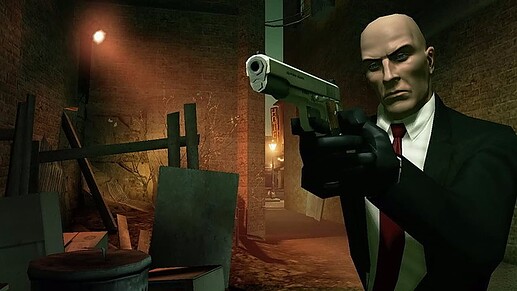 Splinter_cell_double_agent_emile_dufraisne_by_mrgameboy2012-d5kz6p5.png877×911 18.6 KB
The decision must have came pretty late in development since they did use his old models in some of the cutscenes even after they changed it with the new one 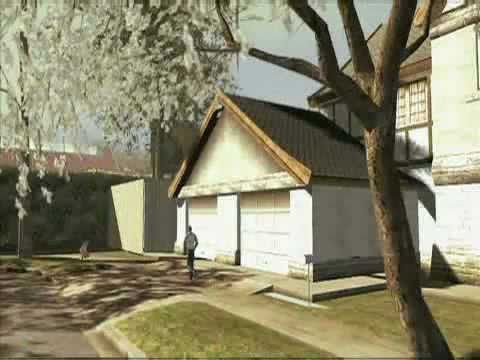 Gotta give credit to BM for one thing, and that’s fixing crap controls from previous games. 47’s heavy and deliberate movements started with this game. Before BM it was like sliding on ice. No more constantly fidgeting just trying to get 47 positioned properly.

What? He feels absolutely weightless in BM and the controls are horrible compared to the 3 Games that came before. 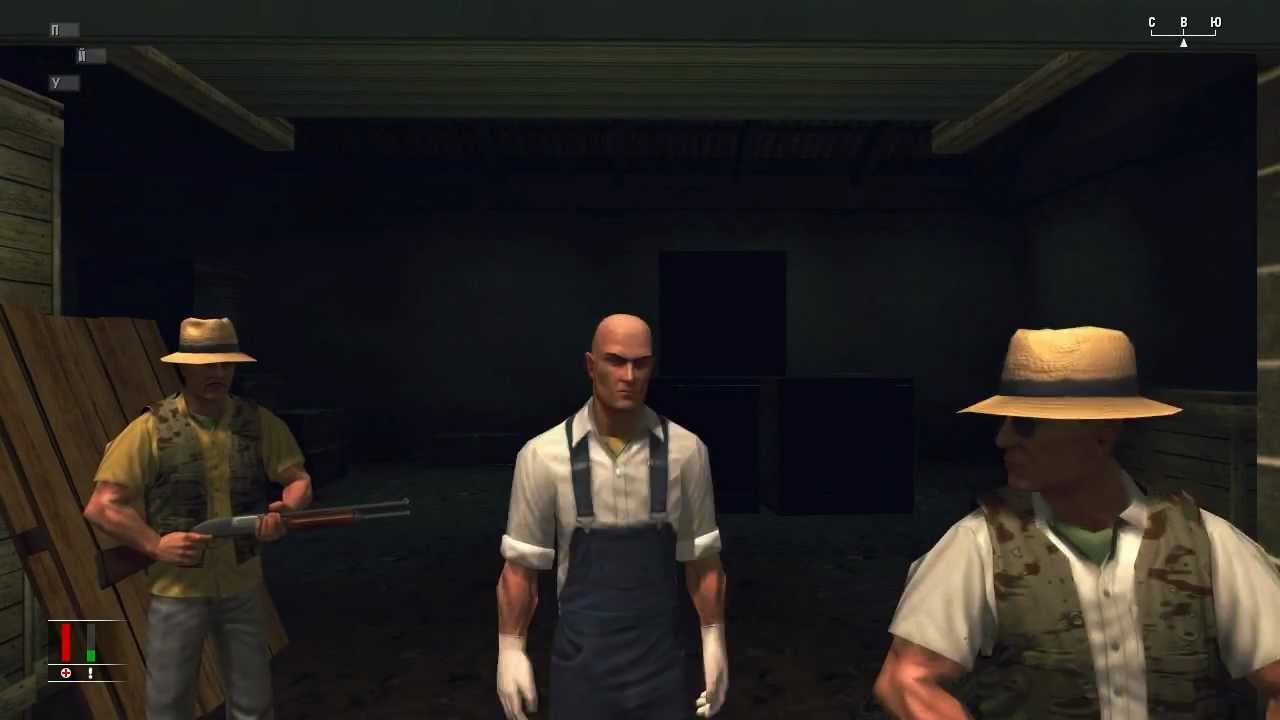 Must say I think SA and Contracts controls a lot more smoothly then BM. It was first with Absolution we saw a major leap in controls.